Hi, How Are You Day commemorates the late, great Daniel Johnston, and SaulPaul’s Alien Adventure beams down at Scottish Rite Theater Last Wednesday inside ACL Live at the Moody Theater, following some nonlinear ramblings on the scientific method, Cage the Elephant frontman Matt Shultz decided, "Perhaps, there is a universal standard, and that standard is love."

Cue the sing-along finale "All You Need Is Love," now an annual tradition at Hi, How Are You Day. In its third year, the event weathered its initial gathering following the September passing of birthday honoree Daniel Johnston. The fundraiser for the Hi, How Are You Project, a nonprofit established by Johnston's manager/Austin City Limits general manager Tom Gimbel to promote mental health conversation, proved a celebratory rather than somber occasion.

Shultz offered the perfect emotionally intense, acrobatic conduit for such elation, littering the stage with discarded clothing layers and luggage bags. On a breezy pop rendition of "Story of an Artist," the singer replaced Johnston's lyric "this problem's made you ill" with "this problem's made you right!" Embracing the song's creative abyss, he went on to shout, "Is anybody out there? Can anybody hear me?" 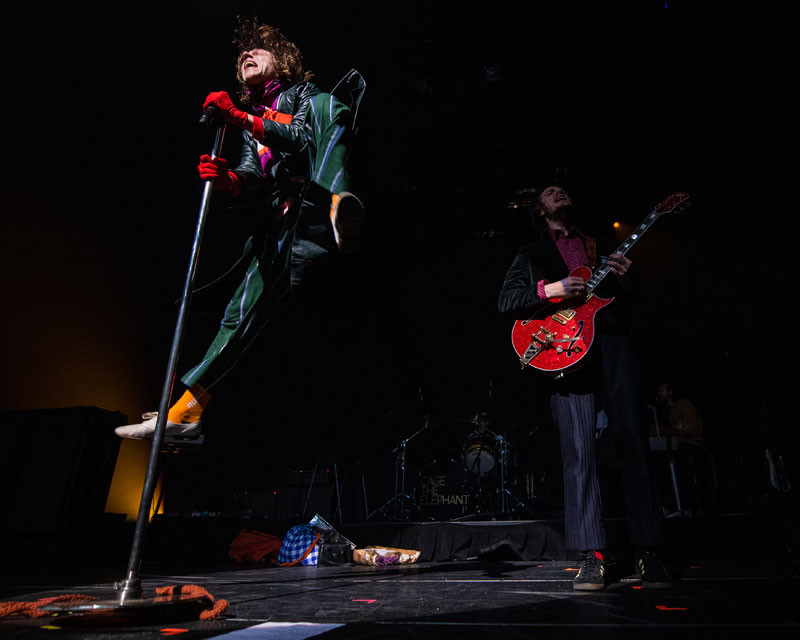 Cage the Elephant performs at Hi How Are You Day. (Photo by David Brendan Hall)

TV on the Radio vocalist Tunde Adebimpe could have used that center-stage time. Instead, he challenged the upper balcony view with a 15-minute interlude at far stage right. Adebimpe debuted a beautifully minimal take on "Walking the Cow," employing just his laptop percussion and vocals.

"Daniel really encouraged me to make four-track songs, and I made [this song] on four-track before it became a band song," he shared before a looped, a cappella take on 2003 anthem "Staring at the Sun."

Locals White Denim made the absolute most of their 30-minute set, launching a jaunty rock rocket with "Backseat Driver" that didn't stop for breaks or commentary. Later, bandleader James Petralli head-butted the mic during a hyperspeed cover of "I Had Lost My Mind." Before Cage the Elephant's finale, Jason Falkner brought out Spoon to assist with songs off the notably upbeat album he produced with Johnston, Is and Always Was.

He called the 2009 album Daniel's last, perhaps forgetting 2010 studio LP Beam Me Up! or 2012 compilation Space Ducks. Host Andy Langer continued the conversation of album merits, reiterating a side-stage message from Gimbel that the Falkner-produced collection was Johnston's favorite and the closest to how he envisioned his music. Upcoming on Wilco's dBpm Records, a vinyl-only live recording called Chicago 2017 is described in press materials as Johnston's final album. On Sunday, local artist SaulPaul celebrated his first-ever Grammy nomination for appearing on Best Children's Album contender The Love, by Oakland hip-hop group Alphabet Rockers. The multihyphenate rapper, born Adam Neal, explored kid-friendly compositions after attending the ceremony in 2016 with the Texas Recording Academy Chapter. Already an inspirational speaker with a TED Talk, he had no idea children's music stood among the nontelevised categories.

"I found my people," he says of the children's music community. "We all have the same mission to make dope music, but our content's different. Kids have all these 'aha' moments, so it's a great relationship."

He penned Alien Adventure with creative partner Bianca Neal after dreaming up an outer space tale of self-discovery one night. Building in humor for older onlookers, the play begins when kiddos find a Walkman and are baffled by the old-timey tech. Naturally, it summons an alien with time traveling abilities.

Alongside new compositions, the production revisits SaulPaul's discography, distinguished by blending acoustic guitar, rapping, and singing on a loop pedal. The lively "Home," a bilingual duet with 123 Andrés, matches a dance number in Mexico. "Motivation," a Zulu-language collab with South African duo Bongi & Collin, soundtracks a scene in the country.

"As a touring artist, I've been exposed to so many different cultures," adds Neal. "You realize there are other ways to do things, and these nuances and distinctions need to be celebrated."

The larger business of being SaulPaul is perhaps best explained by his past few months. In November, new memoir Be the Change detailed his transformation "from prison incarceration to college graduation." The next month, he brought a program under the same name to Asheville, N.C., where the artist trained Buncombe County police on restorative justice practices.

Before Grammy weekend, he attended the Folk Alliance International Conference. During a presentation on looping, he built up a rendition of Lead Belly's early recordings of "Amazing Grace." Layers of beatboxing and guitar eventually invited the folk-oriented audience to sing the chorus.

"Then I rapped, like gritty rapped, 'Two years in the pen plus three on parole/ Now that's five years of my life, and where did they go?'" he explains. "I created this space where I could be authentically me, spit how I spit, and yet have these people sharing the hook. That's my secret – finding the memorable moment."

Gary Clark Jr.'s Grammy weekend proved huge for the Austin native, who took home Best Rock Performance, Best Rock Song, and Best Contemporary Blues Album honors. Backed by the Roots and Austin keyboardist Jon Deas, the blues guitarist offered the winning "This Land" onstage. Telling of a hostile neighbor who couldn't believe Clark owned his home outside Austin, lines like, "Fifty acres and a Model A/ right in the middle of Trump country" landed amidst a roaring bonfire. Find all local winners on our Daily Music blog.

The Tavern, North Lamar's German pub, revives its music bookings of the Eighties. The owners of Esther's Follies ran the bar at the time and bought it back last February. Free series Upstairs at Emily's Attic hits Fridays and Saturdays, so named for the ghost of the haunted building. Hope Irish plays Saturday and the Hens follow Feb. 7.

Black Fret, the local musician-supporting nonprofit, launched a second chapter in Seattle. The offshoot will continue use of membership fees and corporate support to create grants, a model that's provided some $1.75 million to hundreds of applying Austin musicians over the past six years. The Seattle launch video bemoans many of the same affordability concerns cited locally.