The Forgotten Era of Glitter Rock in Mid-70s Austin 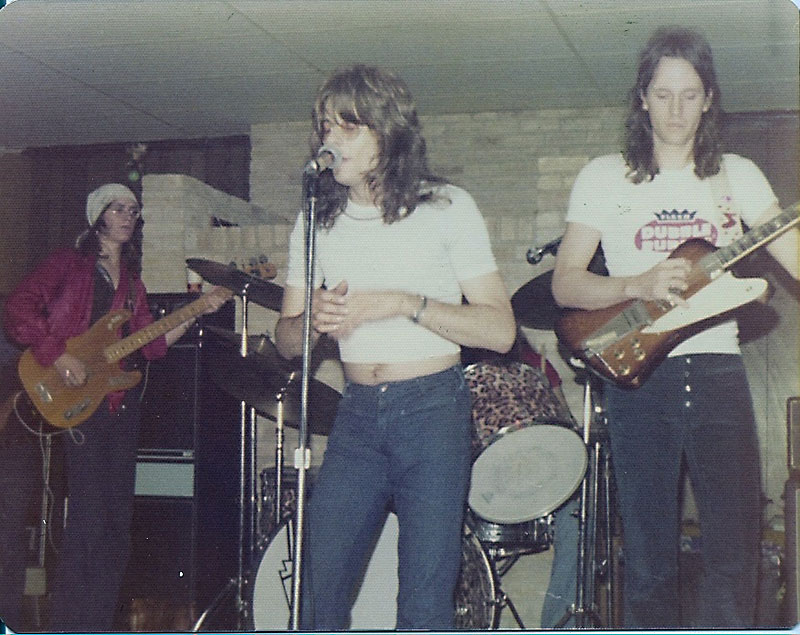 The Werewolves’ Bucky Ballard (l) sits in with Krackerjack at the Abraxis Club in Waco circa 1973. Also pictured are Bruce Bowland (c) and Robin Silar (r). (Photo by Jillian Bailey)

"Austin was boring in 1975," snarls Billy Bill Miller, Roky Erickson's electric autoharp genius. "The outlaw thing was pretty big. Austin became a music capital because of it. I respected the cowboys. I don't know what they thought of us, but they didn't consider us 'punks,' which is what they called the hard rockers. I was glad to see them take it over, but there wasn't a lot to take over."

“‘Glam’ wasn’t a term we used back then,” demurs Eddie Munoz, guitar hero for the Skunks’ original lineup. “It was called ‘glitter rock.’ Glitter was a movement, like punk.”

"1975 was a key year in Austin," he exclaims. "The progressive country scare was kind of at its peak, but '75 was the year Willie Nelson did Red Headed Stranger. Until then, he was big in Texas, but he couldn't draw flies beyond the state line. That record blew up and validated the whole movement.

"The other big thing was Antone's opening that year. The Opry House had also just opened. Everybody talks about the Armadillo in that era, but Antone's signaled how the music scene had expanded. There was already a blues scene at the One Knite for white players and a semblance of a blues scene with black players, but Clifford Antone elevated the blues scene by giving it a big venue. It attracted national attention, so when Muddy Waters played there, he spread the word."

Which is all well and good, but what of the new movement spreading virally through the international rock scene?

"'Glam' wasn't a term we used back then," demurs Eddie Munoz, guitar hero for the Skunks' original lineup before moving on to Los Angeles and the Plimsouls. Pre-punk, the teenage stun guitarist sported a shag haircut alongside similarly coiffed bassist friend Jesse Sublett in Austin glam's last gasp, Jelly Roll. "It was called 'glitter rock.' Glitter was a movement, like punk. It was people being ostentatious, donning their gay apparel, and fucking going out and gigging."

As such, you'd think Seventies Austin constituted one long cannabis-and-Lone Star rodeo at the Armadillo until punk finally arrived here in 1978. Yet glam remains punk's immediate predecessor on the rock timeline, bridging the Sixties' psychotic garage-fuzz reactions to the Seventies' blitzkrieg bop. Teens behaving like transvestites from another planet while pairing up with raunchy power chords seeded punk as surely as Johnny Ramone's Mosrite downstroke.

The New York Dolls revised the Rolling Stones into a thrift-store striptease act. Detroit's Stooges, meantime, approximated a reenactment of the Stones at Altamont: a bloody psychodrama led by frontman Iggy Pop howling about being the world's forgotten boy, the one who's searching only to destroy. Every early UK punk band punctuated its barre chords and rage with one or more doses of David Bowie, T. Rex, Mott the Hoople, Slade, and the Sweet.

"Punk rock is an extension of glitter," affirms Munoz. "It's the same fucking thing: really loud, obnoxious music made by people dressed outrageously."

Hence, in order to pogo to the Skunks at Drag-bound DIY emporium Raul's in the late Seventies and early Eighties, local scenesters first shook a tail feather to Krackerjack at Mother Earth.

Now a Goodwill, Mother Earth's original location at 914 N. Lamar eventually served as the inaugural Whole Foods, then became Cheapo Records. Disco lighting an enormous dance floor with a stage as big as most auditoriums and bordered by bars at either side and a beer garden outside, Mother Earth hosted hard rock bands shunned by the Armadillo. That made it a key venue for the statewide teenage glam underground, disseminating scarf-waving bands wielding crunchy Gibsons, stack heels, and choppy shag cuts.

"There was a band from Dallas called Smiley a bit before '75," Miller recollects. "They looked like a trio of David Bowies. There were sporadic instances of bands that would've fit in the glitter scene."

"I was 16," she remembers. "No one checked IDs in those days. I'd start the night out at one club, then get to Mother Earth in time to see Texas play their Bowie set. Afterward, I'd go to Antone's to see the T-Birds do their Tuesday night [residency], and finish the night at the Split Rail to see Ray Wylie Hubbard."

"These were mostly cover bands that had some original material," he says. "They played their own stuff, but they also played what everyone wanted to hear. Everyone played David Bowie, plus the normal dance stuff people enjoyed – Kinks, Stones, all that."

Many leading lights of glam never made it to Austin. English platform-boot boys Slade, however, stomped the Armadillo on May 17, 1973, a gig Carla Olson – still four years from forming the Violators with Kathy Valentine – describes as "the loudest show I've been to in my life." Roxy Music and Lou Reed also traversed city limits, the former for a 1976 'Dillo date and the latter two years later at the Opry House. The Violators: (l-r) Carla Olson, Marilyn Dean, Jesse Sublett, and Kathy Valentine in 1978, standing in front of “the wall by Mother Earth after it burned down,” writes the latter band member (Photo by Ken Hoge)

On their September 1973 Texas swing, the Dolls only played Dallas and Houston, so Olson commuted from Austin to catch them at the latter's Liberty Hall, appropriately a former drag club. Opening all four nights at Dallas' Gertie's was a Metroplex act who'd go down in Lone Star history as the state's sole glam act to net a record deal.

"The Werewolves just decimated the New York Dolls," says Bevis Griffin, then leading Franklin's Mast. "There was no comparison. The Dolls didn't have the technical skill set the Werewolves had. They went back to New York and started talking about the Werewolves.

One band on this scene – locally, and statewide – made everyone genuflect: Krackerjack.

By the early Seventies, Meador adopted the Stones' shag, smeared kohl around his lids, added to his 5-foot-2-inch frame with platform heels, and shook some Faces-esque action of his own. Add singer Brian Papageorge, possessor of a three-octave range that naturally eased into Paul Rodgers territory, and bassist Bucky Ballard, whose songwriting chops rivaled Meador's, and there swaggered and stomped a band that could've cock-blocked Aerosmith on the arena circuit. Fate never delivered on that promise, but she did whip up Krackerjack.

One group on this scene – locally and statewide – made everyone genuflect: Krackerjack. Born of necessity, they materialized after wiz kid Beaumont shredder Johnny Winter parted ways in 1970 with the blues-drenched rhythm section of his first two Columbia LPs, bassist Tommy Shannon and drummer Uncle John Turner. Ironically, the bandleader desired a more rock-oriented thrust.

"When we first went to New York with Johnny, we were just hicks from Texas," Shannon laughs now. "We saw bands like Led Zeppelin, the Rolling Stones, the Who, and Jimi Hendrix. They dressed real cool, wore rock & roll clothes. Uncle John and I really got into that. We went out and bought all new clothes. I remember I had crushed velvet bell-bottoms, ruffled shirts and scarves, and a shag haircut that kinda stood up on top. We were never hippies.

"Then we moved to Austin, and all the bands were hippies. They wore shorts, sandals, tie-dyed T-shirts, and played weird music. We started playing the New Orleans Club and drew really big crowds. Nobody had seen a band like us. We were the first local band to come off like a big rock band. We started packing places all over."

"Through playing with Johnny Winter, Krackerjack not only had firsthand exposure to the upper echelons, they could see what was coming," attests gobsmacked witness Griffin. "They knew about Humble Pie in its nascent stage. Led Zeppe­lin used to open for Johnny Winter on select European dates, when they were the New Yardbirds. Uncle John Turner would tell you John Bonham saw him using an oversized, 26-inch bass drum and adopted it in turn."

"Krackerjack looked like a glam rock band," wrote Sublett in his 2004 memoir, Never the Same Again, an insider account of Austin punk's birth and a creative life lived on the margins. "But instead of playing retro-styled rock at a frenetic pace like the Dolls or futuristic glam ballads like Bowie, they played bump-and-grind tempo hard-rock blues. Music with metal-rock muscle and deep blues roots – a band that sounded a little like ZZ Top but looked more like the Stones and Aerosmith."

"They were total glam rock!" Olson exclaims. "Feather boas and satin pants. They were T. Rex to the max! But they played shuffles, Central Texas blues rock."

"Krackerjack was a dance band," emails Sublett today. "All their songs pulled people out on the dance floor. They were chick magnets, and this sexy Texas shuffle beat made people dance and drink and fuck. I'm not kidding. Room full of hormones."

"We were a blues rock band," he says. "We just dressed like the Faces and wore eyeliner."

"It's a guitar idiom, a gunslinger idiom," Griffin says of Texas glam. "There's a machismo at the root of it. Krackerjack was a proving ground for the A-list white blues aficionados."

"They had a pretty long run for a band of wildass drug addicts," Griffin laughs. "These motherfuckers were Guns N' Roses before Guns N' Roses were born! They were serious about their music, even though they had this wild hedonistic streak."

"Everything Mike Kindred put down was funky as hell, minimal, linear," attests Griffin. "It wasn't histrionics. Everything boiled down to the bone, rooted in blues and R&B, and played through overdriven Marshalls. When he evolved, he became an ace international session blues player."

This third entry of the Austin Punk Chronicles sees its follow-up next week with the conclusion of chapter two. Each installment divides into halves, with current projections for the entirety of the tale clocking in at 13 chapters and thus 26 published episodes by local punk rock historian Tim Stegall, who projects this serialization to result in a book. Revisit part one, “The Origins of Austin Punk in the Aftermath of the 13th Floor Elevators” (Aug. 2, 2019), and two “How a Collaboration Between Roky Erickson and Doug Sahm Became Part of the Blueprint for Punk Rock” (Aug. 9, 2019).

Next week, in the second and final installment of the Austin Punk Chronicles’ sophomore chapter, Krackerjack, the Werewolves, and Franklin’s Mast funnel into Jelly Roll – but had the musical moment already passed?

A version of this article appeared in print on January 17, 2020 with the headline: Glitter Rock 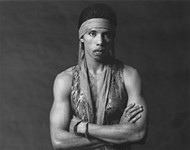 The Glam Punks of 70s Austin Get Up to Their Gypsy Tricks
The Austin Punk Chronicles, chapter two, part two: Glitter rock (1972-76) fades