The Resurrection of Kinky Friedman

From Houston to Echo Hill, the self-proclaimed Texas Jewboy sings a new tune 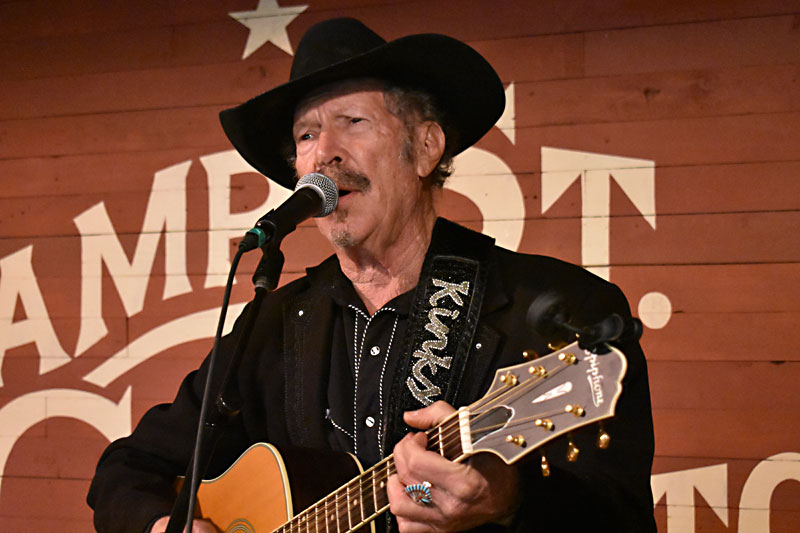 Sitting in a wooden rocking chair outside of McGonigel's Mucky Duck in Houston, he lets the smoke from his ever-present cigar cloud around him. Inevitably, a few fans arrive pre-soundcheck to meet him, and perking into persona, he's happy to indulge the attention.

Everyone has a Kinky story they're eager to share with him. Some mention the dozens of detective novels and collections of nonfiction he's published over the past 30 years. Others want to talk politics, hoping to rekindle the independent spark of his high-profile but low-vote run for Texas governor in 2006. Most relate the first time they saw him perform or heard one of his underground hit songs.

Although his seminal place in Texas music remains undisputed, he hadn’t actually written a song since 1982.

Primed to laugh, they're seeking a chance to banter with the notoriously cantankerous Texan.

At 75, however, Friedman's having trouble hearing. He leans in close to catch names, then falls back on his ready-made arsenal of well-crafted wit and one-liners in responding to most questions. Naturally, he's worked a joke about his hearing problems into the repertoire. The best fodder for comedy remains Kinky himself.

That outsized aura is also one of Fried­man's greatest challenges these days.

Fans come to his shows with expectations. They want to hear classics like "Sold American," "Ride 'em Jewboy," and "Ass­hole From El Paso." Yet equally crucial is experiencing the classic cigar-chomping wit, unapologetically politically incorrect bravado, and ornery cultural critiques that define his career.

Kinky still revels in those aspects of his character, as well as the conflicting attention he can attract, but life's different now. For starters, he's returned to songwriting after nearly four decades. Although his seminal place in Texas music remains undisputed, he hadn't actually written a song since 1982.

"You get a sense after a while that it's just not going anywhere, so I turned my back on it," he says of walking away from music. "I wasn't putting out any records, wasn't singing, wasn't on the road for years. Of course, I was doing other things, but 40 years is a long time to lay out."

The return came tentatively with 2015's The Loneliest Man I Ever Met, a collection of covers except for the original title track. Last year's Circus of Life arrived as even more of a surprise behind a dozen new songs that cast Friedman in a much more reflective mode (see "Playback: Kinky Friedman Between the Lines," June 29, 2018). Resurrection, October's follow-up, resets the songwriter altogether.

Straightaway, the songs are some of the best he's ever written. Although his voice is more worn and his delivery careful and patient, Larry Campbell's production and arrangements excavate a pathos Kinky's only rarely demonstrated. Whereas sharp humor and shocked satire once formed the foundation for his songs, Resurrection delivers a wisdom of experience, loss, mortality.

Therein lies the paradox of Friedman's return to music – and a tension he's not sure he can resolve.

For all the self-reinventions over the decades, he's forged a career out of being Kinky. For all the adulation, respect, and success that's reaped, his barbed wit and fiery independence undercut his seriousness. Such cross-currents undoubtedly proved a dilemma for his political campaigns, and now they challenge consideration of his new sincerity.

The Loneliest Man I Ever Met 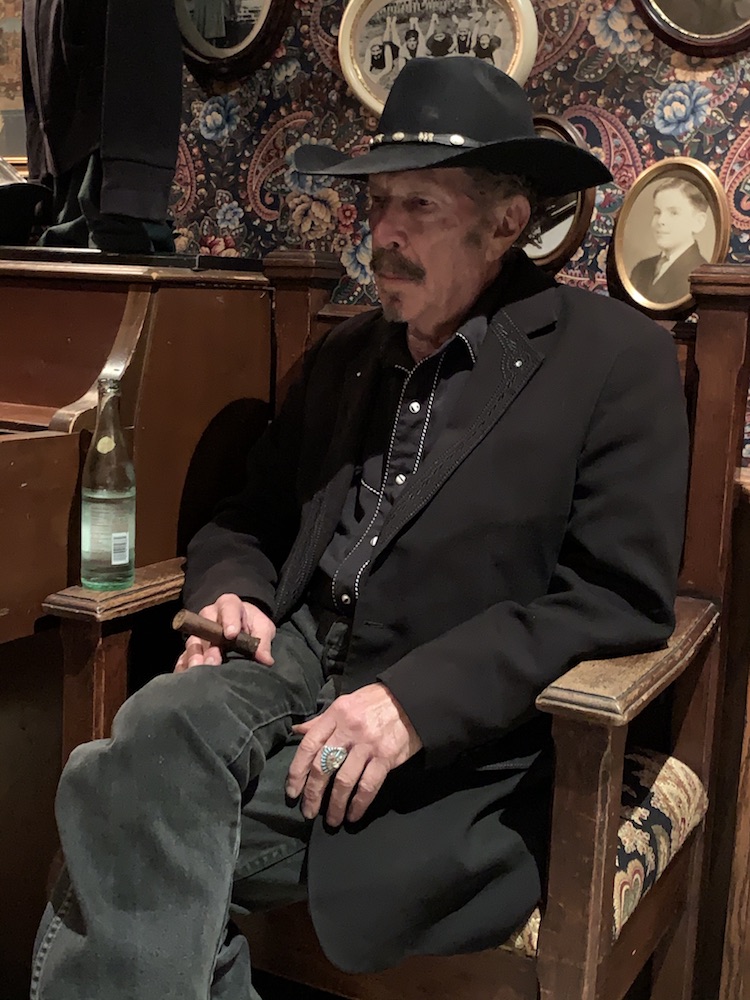 He shares the land with his siblings, inherited from their parents who long ran a summer camp on the property. The last one held out until about five years ago, though former campers still frequently trek to the ranch to revisit the grounds. Friedman's small, one-bedroom cabin sits at the edge of a deserted ring of bunkhouses.

"It's a sad thing to see, an old camp," he acknowledges. "But the ranch is like a spiritual harbor to me. And when it's mowed and painted, it looks good. It's rustic, it's primitive, and it's a great place to be for a kid. We kind of lost it to the modern world."

His six dogs greet him at the door, the last of the thousands he saved and adopted out from his Utopia Animal Rescue Ranch. They enjoy the run of the house, which is otherwise filled with stacks of books and mementos from around the world. Photos of his parents and the camp cover the walls, and Fox News blares silently from a TV in the corner of the living room as he stokes up the fireplace.

In the surreal quietude (zero cell service), the modest cabin strikes a stark contrast to its owner's larger-than-life reputation.

It's easy to understand how the solitude of Echo Hill could slide into loneliness and despair. Onstage, he recounts how that melancholy returned him to songcraft. Depressed and watching Matlock late one night, he received a call from his old friend Willie Nelson, who counseled him to turn off the TV and start writing. Kinky delivers it as a joke.

"I came back to songwriting strictly because of personal unhappiness, loneliness, and my idea of being miserable," reflects Friedman. "It was not an accident. I was living in this old farmhouse, and when you're alone and feeling sorry for yourself, you start thinking, 'Jesus, some people have all this stuff and a house on the hill and Darby's Castle, but I'm still living in this fucking place where it still rains through the roof and I got pots catching water.'

"It was tragedy and failure, or what I consider failure. I can talk to people who think I'm a big success, but they don't know. Financially, I never have been, though I do like to piss money away, whether in Vegas or on women or overtipping.

"So a lot of this is also cathartic for me," he continues. "I did not intend to think of the famous and dead people in my phone book and write a song about them. 'A Dog in the Sky' was written out of sheer grief, because that was one of the loneliest years of my life."

Friedman knows his new songs are good, but he's not sure there's a place for them, or him, in contemporary culture. The music industry holds no real path to success better than he faced in the Seventies, and he rails against a modern society that would never allow for an inflammatory satire such as "They Ain't Making Jews Like Jesus Any­more." He's also not convinced anyone really cares what he has to say at this point in his career, even as fans' reception of the new material continues to be enthusiastic.

"You can take great songwriters, and in their 70s, they're just not going to produce their greatest work," he argues. "It's hard to find someone whose work now is better than it was then, or even really is good. It may be too late for me, and Ray Price is right that once you pass a certain age nobody's listening even if you are doing your best work. I'm 75 years old; I've gotta fall off my perch sooner or later."

Even so, Friedman's more energized and inspired than he has been in years. He's touring extensively behind Resurrection, preparing his next novel for publication, and, most importantly to him, looking to reopen the Echo Hill Camp this summer as a retreat for children of Gold Star service members and first responders.

"We want to bring her back because Echo Hill heals people. It's got a lot of magic to it," he says. "It's what we all ought to be doing, which is helping people who have bigger problems than our own. I'd much rather do that than anything with music or books or politics or anything.

"This place is going to come alive if we get it off the ground."

Kinky Friedman honed his live show to segue audiences into his new material. The first half rolls out the favorites, unloading familiar songs between perfectly timed jokes and playfully combative banter with the crowd. Then "The Ballad of Ira Hayes" serves as a transition by introducing a more serious turn into some of his more personal recent songs.

Turning that corner, "Resurrection" provides the high point. The ode to his parents and lost friends speaks of a will to continue. He stays late after the show to sign autographs and take pictures, but the tone of the crowd is notably different than before the show.

Now, they approach with an earnest appreciation – the songwriter's sincerity returned to him.

"Resurrection is what we all need," he says afterward, exhausted but enthused. "Imagine if the world turned off Matlock, what we all could produce." 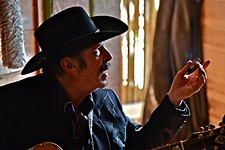 Playback – Kinky Friedman: Between the Lines
Kinky Friedman's first album of original songs in 35 years, 'How hard could it be?'