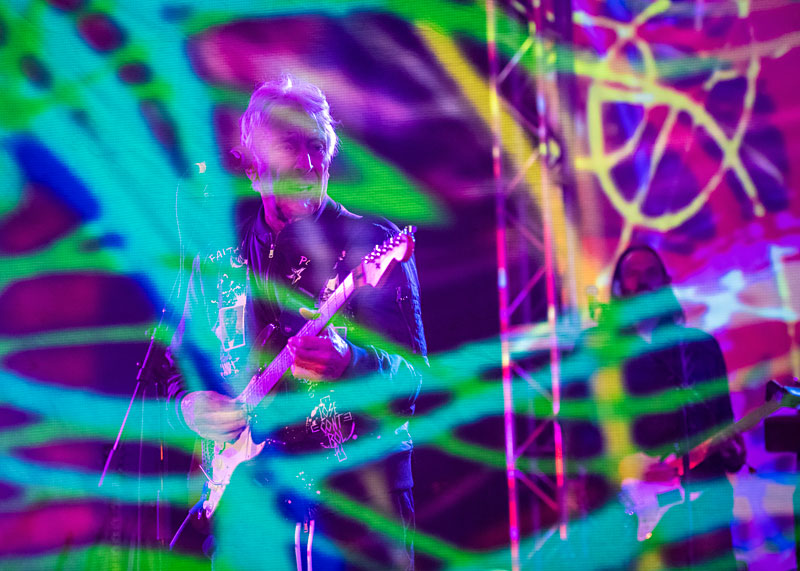 Thursday, the first and coldest night of Levitation, carefully arranged myriad music scenes like puzzle pieces on the Downtown map. Berets and beanies bobbed among indie fans at Stubb's for Devendra Banhart and Angel Olsen. Others raved around the corner at Black Marble and Tr/st in Empire Garage's dark enclosure. More cultural compartments included sold-out heavy hangs at Mohawk, which hit capacity for High on Fire and Power Trip, and ample reverberation at Barracuda for onetime Austin Psych Fest purists with Japanese and Australian purveyors Kikagaku Moyo and Stonefield, respectively. It's what usually happens on Red River, but all at once and drenched in liquid light.

Austin participants Nolan Potter's Nightmare Band decided the individually ticketed sprawl felt "like [South by Southwest] but all the bands are good," as noted on Instagram. Ahead of his Heart Bones set at Hotel Vegas' Sunday showcase for Third Man Records, veteran festivaler Sean Tillmann (Har Mar Superstar) offered agreement on Twitter: "Running into so many old friends. Feels like SXSW did in 1996."

Olsen, for her part, thought it was a metal festival.

"We're not really metal ... we're getting there though," she quipped onstage, referencing either the heavier instrumentation on new album All Mirrors or the all-black ensembles across her septet, or both.

No matter how you slice it, Levitation made huge strides in its second Red River occupation. Concert recaps and photo galleries abound on our Daily Music blog, and here are my favorite scenes from the major annual. 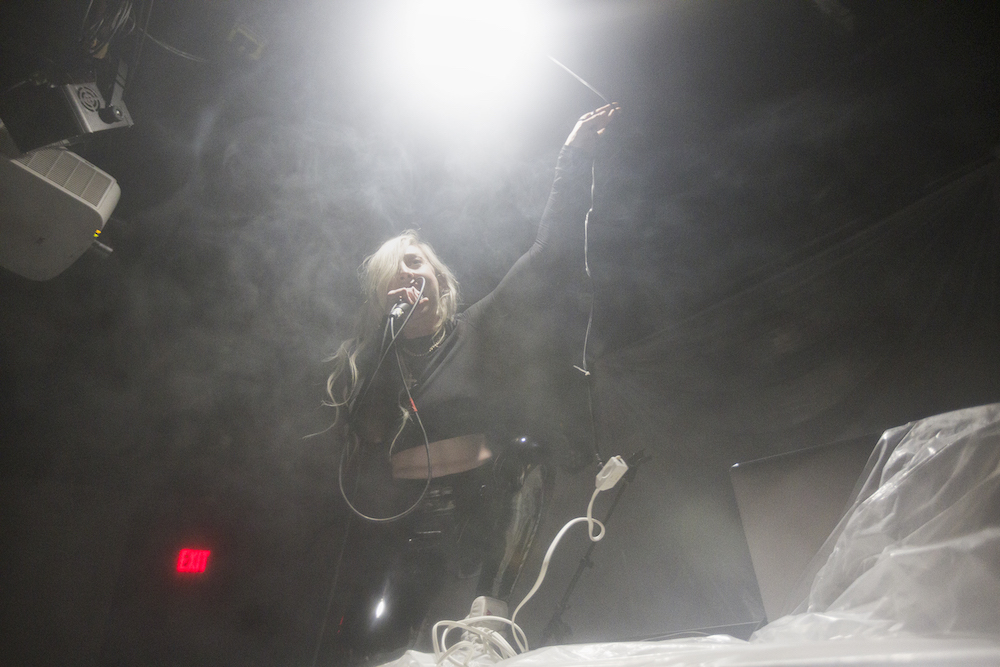 Beginning in complete darkness, Kristin Hayter made the most of minimal elements throughout her solo performance Friday. A tarp allowed shadow theatre, clamp lights toyed with audience views, and extension cords constricted the singer's limbs amid waves of unforgiving drone metal. On her sonic expression of abuse, the Rhode Islander told the Chronicle she "wanted to take it out of being a play-by-play of what happened to me," and "put it in a biblical, alogical context of absolute violence ... that makes it more relatable to a wider swath of people." Based on the stunned audience reception at Empire Control Room, Hayter succeeded. 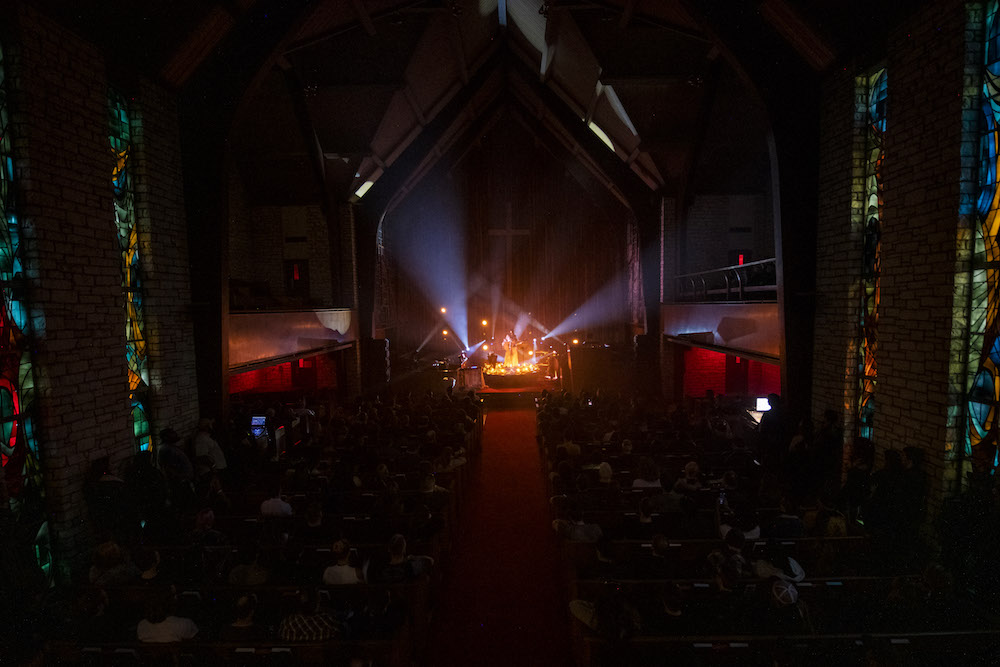 "I'm going to go back to the old days .... This is 'Cousins of the Antichrist,'" announced austere songwriter Chelsea Wolfe moments before the huge cross at Central Presbyterian Church lit up in red. The acoustic performance harmoniously met the dark, cavernous locale, with Wolfe at the altar in a ring of branches and candles. The California folk gothic sat down only for a cover of Joni Mitchell's ambling "Woodstock." Standing out with the weekend's most stunning light design, the set marked the first of two Saturday specials with Wolfe's Sargent House labelmate Ioanna Gika.

The Black Angels Meet Their Maker

Named in tribute to the Velvet Underground's "The Black Angel's Death Song," Levitation founders the Black Angels shared the stage with VU co-founder and song author John Cale. "We're probably more excited than you are," mused Angels frontman Alex Maas in veteran Chronicle psych scribe Michael Toland's review of both acts at Stubb's Saturday. During Cale's fiery set, guitarists Jonathan Donahue and Sean "Grasshopper" Mackowiak of Mercury Rev, which opened for Flaming Lips on the same stage a night earlier, joined in on a cover of the Modern Lovers finale "Pablo Picasso." After, Cale reemerged with the Angels for an extended and extreme take on VU's "Sister Ray."

Preceding Black Moth Super Rainbow Sunday at Mohawk, celestial Austin trio Dallas Acid offered their first hometown airing of fantastic new LP The Spiral Arm. The performance began with the house music still playing as Linda Beecroft and Michael Gerner ceremonially removed a blanket hiding their central stage element – a massive gong. Such an instrument evokes the desire to take a huge whack, but percussionist/vocalist Beecroft never did. Instead, offering respite from a weekend of high volumes, she pinged and danced along its surface amid the dazzling electronic base of Gerner and Christian Havins. 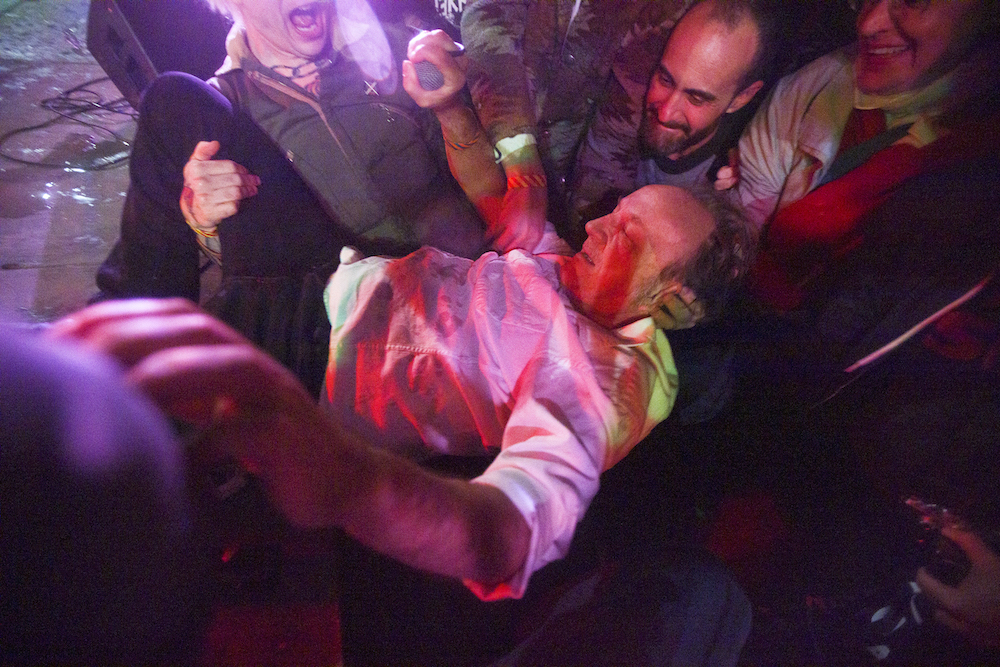 Cashing a rain check from Fun Fun Fun Fest way back in 2008, San Francisco post-punks Flipper finally arrived in Austin to reprise a performance at Liberty Lunch circa 1985. Former Austinite David Yow of Scratch Acid and the Jesus Lizard led the chaotic proceedings outside at Hotel Vegas, ending on cult favorite "Sex Bomb." The finale invited onlookers onstage and sax assistance from Sailor Poon's Billie Buck. At Stubb's, the Flaming Lips played "Felt Good to Burn" for the first time since 1995, alongside Daniel Johnston favorite "True Love Will Find You in the End." Online fans emphasized that the Lips and Mercury Rev last aligned locally 20 years ago during SXSW 1999 with Sparklehorse at La Zona Rosa.

Waterloo Records has a new landlord. The 37-year-old record store, and surrounding retail center at the corner of West Sixth and North Lamar, is now controlled by major local developer Endeavor Real Estate Group. In response, the store tweeted, "We want everyone to know we're not closing. We're ready to face the future &, rest assured, Waterloo Records will live on! As we get details we'll share them." 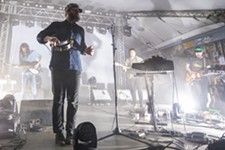 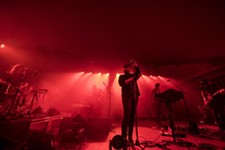 Faster Than Sound: Falling Into Levitation
With a new autumn time slot, Levitation finds footing as a Downtown “gaggle of bands,” Angel Olsen chimes in on new album All Mirrors, and more music events