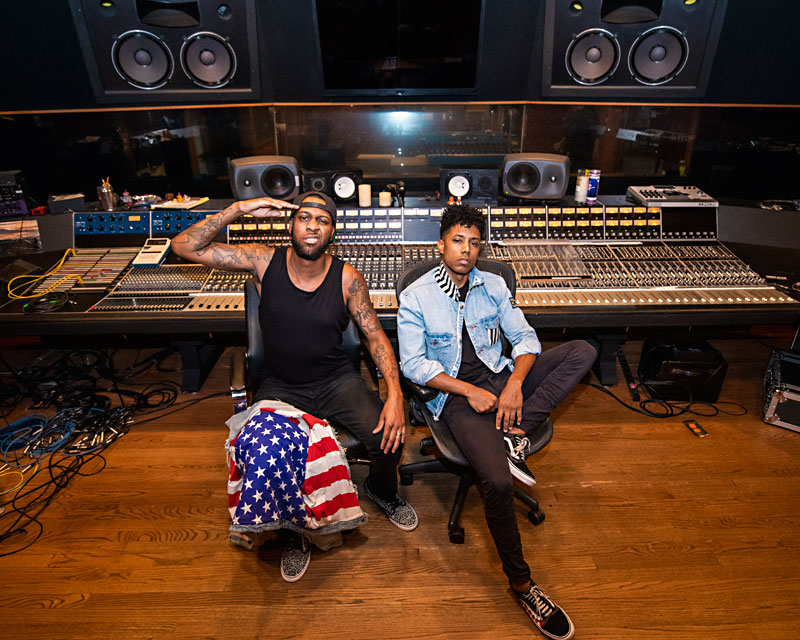 "So it's funny because we don't know why it makes sense. But it is working – you feel me?"

"I'm into word aesthetics, so it just sounded good," says Zeale of the group name, under whose banner Gary Clark Jr. remains a permanent honorary member. "And first of all, we're black, so that's one thing."

The second thing is that connection maintains a distinctly OG origin, from Clark to Shaw – close friends since middle school – and on to Zamarron.

"Me and Phran have known each other for a minute, and we've always been competitive," continues Zeale (say zee-lee). "We've almost been rivals of a sort, even from back in the day when we first started playing ball."

They maintained their rivalry until they didn't.

Phranchyze once reigned as Austin's battle king and most notable export into the international scene. A former fixture on YouTube channels dedicated to the art, his leap forward came in 2007 when he placed third at the World Rap Championships in Los Angeles. That and taking home the 2010-2011 Best Hip-Hop/DJ honors at the Austin Music Awards helped inform his decision to forgo college.

"Yeah, that really didn't go over," he told the Lubbock Avalanche-Journal in 2011. "You have to know that my dad is a Nigerian accountant. Education is very important to him. My mom is a writer, so she wasn't as negative.

"But that was a rough time. I think they see I'm making progress."

The MC released an entertaining slew of themed mixtapes in the course, along with numerous national touring dates to keep the name ringing. He poured much of his angst into music. "Oreo" from 2013's 3, for example, describes a man struggling with others' acceptance of his blackness – or not being black enough. Tons of these powerful moments exist across his discography. However, with a marriage and growing family, the rhymesayer believed it might be time to give rap a rest. He hadn't released new material since 2015's #Theanimetape.

After delivering homegrown rap alongside his fellow Blackillac wordsmith at Fun Fun Fun Fest 2008 and finishing a Lucky Lounge residency, he rerouted his career with the help of Croatian DJ Marko Jelic. 2014's genre-fuzzy Frnz & Fngz fully reintroduced Zeale into another realm of melodic power-pop/rap consistent with his touring alignment to Billboard singles-chart bullies Imagine Dragons and Awolnation.

"We'd done the announcing together, so we were already in proximity again," explains Phranchyze. "But we weren't thinking about anything musically until we were like, 'We're comfortable with each other. We can do this.'

"Gary was staying at the W Hotel Downtown, and was like, 'I have these beats, y'all wanna listen to them?' We were like, 'Sure,' but we didn't think anything of it at the time. We just thought, 'Wow, Gary still makes beats – that's cool.' I didn't realize the scope of everything. I thought maybe we'd make a few songs; maybe get them licensed. Nothing more than that."

And yet, Clark had pocketed beats since junior high. While he worked on 2019's This Land, the two MCs would post up at Arlyn Studios to provide the guitarist some hometown normalcy. The ACL Fest headliner describes the situation as a little more planned out, which makes sense since both rappers cite him as the actual driver of their union.

"They knew I had some beats, so they were looking for some stuff," says Clark. "They're just, y' know, 'What are you going to do with [these beats]?' I ended up playing a couple hundred of them."

A couple hundred of them.

In the studio, the trio picked out their favorites, began recording with no particular end in sight, and fielded an album utilizing Clark's production. Other beat input informed 10 eventual singles released over the last 13 months. Their latest, slow-trap banger "Shoebox," featuring like-minded Daytona Beach duo 300lbs of Guwop, garnered a run on Apple's Beats 1 radio.

Debuting live as Blackillac with Clark, the MCs began with a bang, performing two shows in L.A. during NBA All-Star weekend in February. A successful hometown appearance, including Clark, at Native Hostel in March followed. Zeale says their Hot Luck Fest show in May – without Clark – rendered a more accurate breakout barometer.

"We didn't have a real measurement of what we were doing before then," he says, referring to Clark's obvious appeal. "We pulled up and the venue was empty. So we were like, 'Back to the good old days.' But when we came out, it was like 400 people, and some of them already had merch."

Gary Clark Jr.’s patronage will help, but ultimately Zeale and Phranchyze will have to carry the load.

Now that Clark is back off-tour and again in the fold, the group readies a proper, unnamed full-length. That patronage will help, but ultimately Zeale and Phranchyze will have to carry the load. ACL Fest is a tremendous stage to ascend, but it will be their next steps that pave the road.

"We always joke that we've built this Frankenstein monster and now it's walking around," laughs Phranchyze. "Now we have to figure out what we're going to do with him."

One would think Gary Clark Jr., one of the coolest musicians representing Austin to the world, always had it together. You'd have to go back to middle school to have caught him slipping.

"I've been making beats low-key since the seventh grade," reveals the blues guitar sensation. "I mean, I wasn't good at it, but I loved it, worked on it all the time. I remember I made a beat for my buddy Robbie and me, for a talent show. We had a song we were gonna do, called 'Young Soul.'

"I was all excited. Unfortunately, my [tape] copying skills weren't so good, 'cause when I brought the tape into the talent show, there was nothing on it. I didn't check it before I left the house."

Blackillac appears during weekend two of ACL Fest on Saturday at the Vrbo stage, 11:45am.

Blackillac
ATX rap vets double down with an assist from Gary Clark Jr.