Faster Than Sound: 523 Thompson Sticks Around

DIY venue co-runners recap a year ahead of Vans event, Rev. Merrill Wade ends the Soul of a Musician Series, and Hi, How Are You Project announces Daniel Johnston tribute 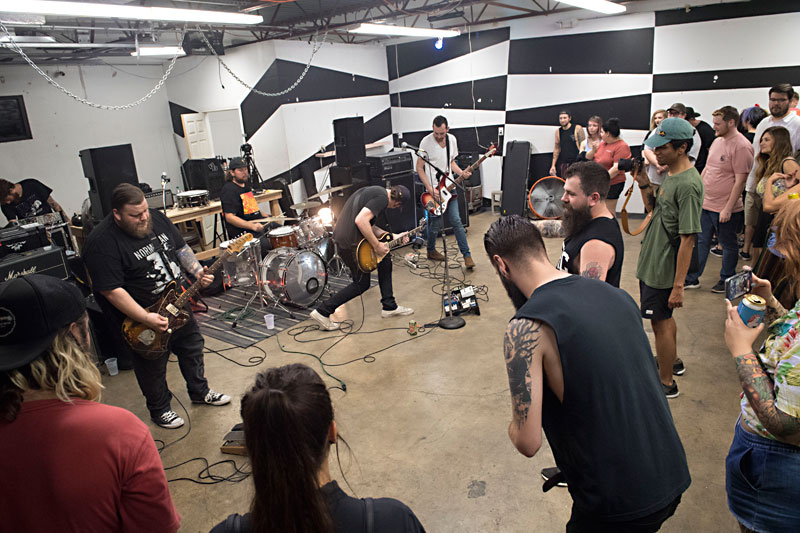 Park under the big horse mural at Callahan's General Store, carefully cross Thompson Lane – a side street off the construction hell part of 183 to the airport – and stroll past the seedy 24-hour sex store next door. Behind the bright trucks for College Hunks Hauling, you'll find the doorway to one of Austin's few music-focused DIY spaces.

Named for its address, 523 Thompson has almost made it one whole year of booking up to five nights a week. That's no small feat for a venue with zero paid employees. Besides full-time jobs, core duo Patrick Lehman and Andrew Malesky swap out door, sound, and daily operations duties.

"DIY is a community for everyone, but you also don't have any of this outside help," says 24-year-old Malesky. "You literally have the community, and the sacrifices you take on in your personal life to make sure the community has somewhere to play."

Since its October 2018 launch, 523 Thompson provided transfer for the electronic scene housed by Kinda Tropical and the hardcore sounds displaced at Beerland. On Friday, Lehman helped book a night around Latvian electronic musician Kodek, with DJs spinning till 4am. Following the previous evening's black lights and fog machine, Saturday ushered in a lineup of rock and emo under the bright linoleums.

"I've gotten a lot of appreciation for the space because it allows more artistic forms of music to take place," says 23-year-old Lehman.

Founding member Joanna Becker and Megan Cisneros of Mutual Friends Records also help out. Becker's promotions as Rauschen brought in major NYC DJ Umfang of the Discwoman collective this year. Other highlights include picking up aftershows for January punk fest This Is Austin, Not That Great, as well as packed performances for takeoff Austin acts Temple of Angels and Portrayal of Guilt.

Lehman is especially pleased with Thompson's flow of promoters, who have helped achieve their goal of a queer-friendly platform.

"Being someone who is LGBT, what I wanted was a spot where people could express those sentiments and feelings openly," offers Lehman.

The warehouse recently lost an essential figure in Jackson Kritlow, who died unexpectedly in his sleep on August 25. The 28-year-old music lover helped open the space alongside a group of some 10 interested scenesters. Malesky signed a lease to the 1,400-square-foot semi-finished room formerly used as film equipment storage.

He met Lehman while helping run DIY venue Shirley's Temple, which lasted less than a year next to the train tracks near North Lamar and Airport Boulevard. The 2017 shutdown occurred during a social media dispute over one member accusing another of "gaslighting" and "micro-aggression." This year, the 523 Thompson team quickly booted a co-founding member after learning of sexual assault allegations against them.

"DIY means a lot of different stuff to different people," concludes Malesky. "I just want to make sure that when people show up at our space, they know they're going to be taken care of, accommodated, and feel safe."

Reverend Merrill Wade Retires the Soul of a Musician Series

Seven years ago, Reverend Merrill Wade started a weekly concert series that ran on time and benefited everyone involved. He'd already mastered both skills during his day job as the rector of St. Matthew's Episcopal Church. After 30 years as an ordained priest, the 65-year-old local is retiring from the church, as well as his role running the beloved Sunday night Soul of a Musician Series.

"Any given show, if we had 100 people in the house, 20 were church people," explains Wade of his community outreach. "It was always intended for the music public. It's going to be hard to let it go."

After moving from the former Spicewood Tavern to now-shuttered Iron Cactus near the Arboretum, the free series found its final home at Threadgill's on North Lamar. Early on, acts like Shinyribs' leader Kevin Russell, Guy Forsyth, and Dana Falconberry helped Wade establish the 75-minute Sunday evening benefit for HAAM and SIMS. Following a short set, Wade deep-dived the lyrics of the musicians' final two songs.

Then, Wade traditionally persuaded his interviewees to belt out a Beatles song with him while waiting on their dinner.

"If all of that comes together, I've had a good show," adds Wade. "I got to be the announcer, which is something I've enjoyed doing all my life – being onstage and having a good time."

Wade's foray into the series began with a former guest spot as Duke the Music Scout on local FM sports channel The Horn. By setting up interviews with touring acts, Wade developed the booking chops for the Soul of a Musician Series, which celebrated its 200th episode in June at Sam's Town Point.

Although Wade says St. Matthew's will not continue the series, he plans to get back in the game eventually.

"I'm going to take a break," he says, "but there's no chance I'm not going to be involved in local music."

This weekend, memorial services will be held in Katy honoring the recent passing of Austin music legend Daniel Johnston. Shared exclusively with the Chronicle, Johnston's longtime manager Tom Gimbel offers an opportunity for locals to celebrate the songwriting great in correspondence with World Mental Health Day. On Oct. 10, Mohawk will host acts performing tributes to Johnston's beloved and idiosyncratic songs.

Although the lineup isn't yet secured, Gimbel is currently in talks with performers who will be in town for the Austin City Limits Music Festival. The concert will be presented by the Hi, How Are You Project, a nonprofit launched by Gimbel and Courtney Blanton to promote open conversations around mental health. 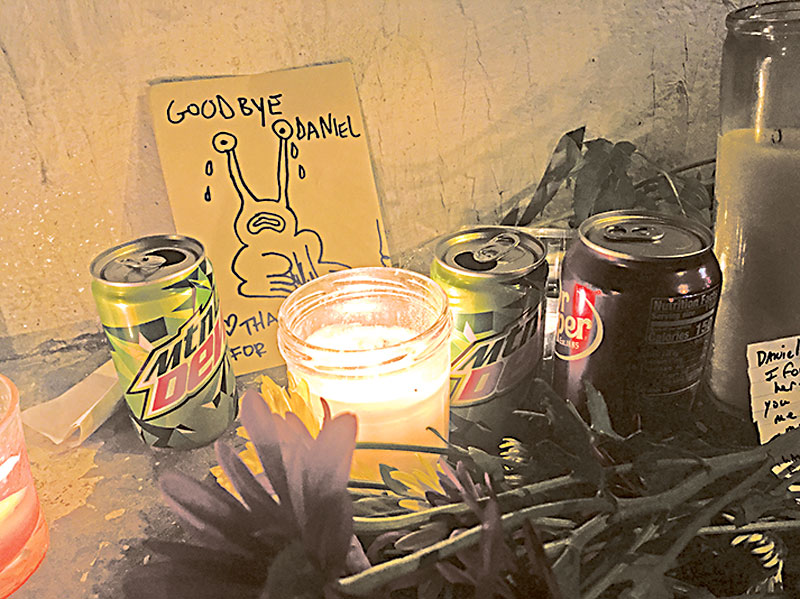 "Dan wasn't going to get up on a soapbox and advocate for mental health, but the way he lived his life so openly was the inspiration for it," explains Gimbel. "He would let you in on his world through his music and his art, and that's what inspires so many other artists."

Over the past week, stars like Wilco, the National, and Flaming Lips offered live covers of Johnston classics. Gimbel expects for the third annual Hi, How Are You Day, slated on Jan. 22 for Johnston's birthday, to be their biggest yet, potentially incorporating international events.

"Daniel always said he wanted to be famous," says Gimbel. "If he could see this outpouring from fans and other artists, I think he would be happy with that."