On the former front, the double vinyl debut of the guitarist's third album, expertly packaged in a hard, roomy, single sleeve instead of today's unnecessarily bulky gatefolds, will melt your stylus. As mastered to wax and manufactured by Kansas audiophiles QRP, Bramhall's turning point as a musician – post-Arc Angels fame and addict notoriety, not to mention two initial LPs singular in voice but soft in rock focus – spills forth from twin speakers with a cornucopia of sonic ecstasy. Beginning with the best song the Texan had written up to that point, opener "Green Light Girl," Buddy Guy meets Blue Cheer, and especially on the succeeding "Voodoo Chil-" – er, "Problem Child" (see also "Smokestack") – the full, rich, analog-warmed alchemy emanating from the 2001 release rolls ancient, spell-casting blues tones and contemporary shred together into a genuine Band of Gypsys jam between Bramhall, Austin beat beast J.J. Johnson (Tedeschi Trucks), and bassist Chris Bruce. "So You Want It to Rain" presages DBII's two recent comebacks, 2016's Rich Man and last year's Shades, a pair of modern blues classics that blueprint composition, aural detailing, musical virtuosity, and No. 1 reveal: the universe of possibility in the space between the notes – those milliseconds of transitory silence that build up tension, swagger, narrative.

Equal to the task, Welcome's 2-CD counterpart nonchalantly adds a whole other disc of unreleased songs from the sessions. Seven tracks adding 35 minutes to an already hour-plus opus, its sequencing, arc, and autonomous satisfaction rank this as its own album. No lyric sounds half-baked or incomplete. In fact, its supremely approachable hooks, melodies, audio touches, and overall clarity of sound and vision reveal a far different Welcome had not only some of these songs, but all of them, subbed in for a few of the more free-form excursions on the original LP (e.g., "Life"), on which Heartbreaker Benmont Tench manning the organ obviously inspired the trio.

Had this material made the cut, you'd have the White Album rather than, say, Axis: Bold as Love. The aquatic balladry of piano strummer "Lightning," a sublime addition to DBII's body of released work, segues seamlessly into Chris Cornell-like thumper "Rage," which lacks a vocal but misses no voice – even Bramhall's unreal instrument: a thick, expressive blues command both sensual and masculine. His gently electric psych-folk on "Idaho Woods" is simply stunning, an instantly unforgettable track conjuring some late Sixties dream-teaming of George Harrison, Eric Clapton, and Steve Winwood. 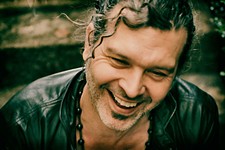 The Rebirth of Doyle Bramhall II
For his first solo LP in 15 years, Eric Clapton’s top lieutenant may have put out the blues album of 2016