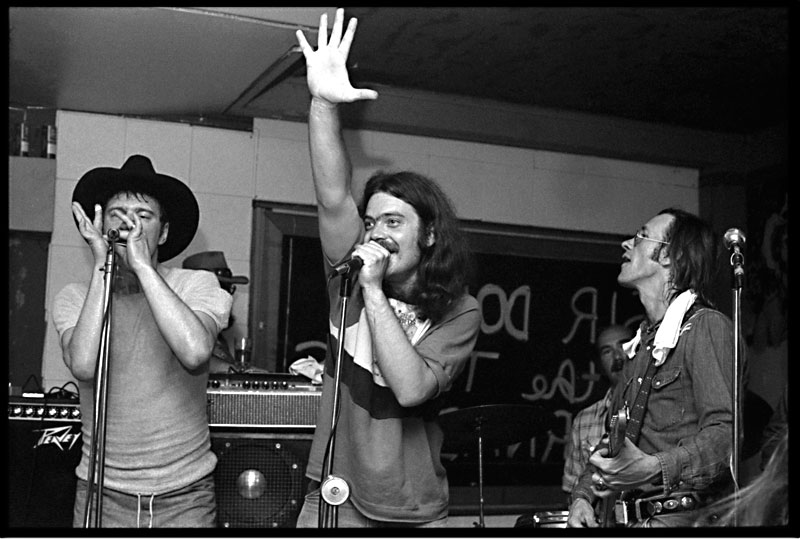 As Roky Erickson's live solo debut loomed at the grand opening of the Ritz on October 18, 1974 – the same night as the premiere there of Tobe Hooper's The Texas Chain Saw Massacre – the former 13th Floor Elevators frontman not having a backing band for the occasion became a pressing issue. Hastily returning from Memphis, the singer's chief collaborator, Bill Miller, had no choice but to enlist the rhythm section of his band Cold Sun, Mike Richey and Hugh Patton. Erickson remained insistent that he man the guitar solely, while Miller dusted off his electrified autoharp and fuzz box.

Re-sequencing the word "bible," the newly christened Bleib Alien folded in Dylan­esque folk rockers including "Song for Abe Lincoln" and "Warning (Social and Social-Political Injustices)," which seemed to equate Republican politics with grave robbing, alongside new slasher film cuts "Don't Slander Me" and "Stand for the Fire Demon." That went over well with the movie crowd. Further bookings saw Blieb Alien employing Alice Cooper-inspired theatricality, such as donning lab coats to bring out Erickson in a straitjacket to sing "You're Gonna Miss Me."

Some found this in bad taste given the bandleader's psychiatric confinement, but parodying his reputation originated with Erickson. Fatefully, those inclinations found an instant fan in a fellow big dreamer, Doug Sahm, who saw the future of rock in the psychotic reactions of his fellow Texan's Hammer Films fixation. According to Shawn Sahm, preserver of Doug Sahm's estate since 1999, his parent experienced something of a premonition in 1973.

Booked at Max's Kansas City in New York for three nights to promote his all-star Atlantic Records country rock masterpiece, Doug Sahm & Band, the San Antonio hepcat cast his gaze from the stage and spied the New York Dolls staring back at him. A glam rock distillation of the Rolling Stones and Shangri-Las with the MC5's amplifiers – wearing every item in a thrift store women's department at once, faces caked in Max Factor and Maybelline – the Dolls became a blueprint for punk rock. Keith Richards worship from guitarist Johnny Thunders, blitzkrieg power chords, and sour-note Chuck Berry leads proved seminal to the coming aesthetic. 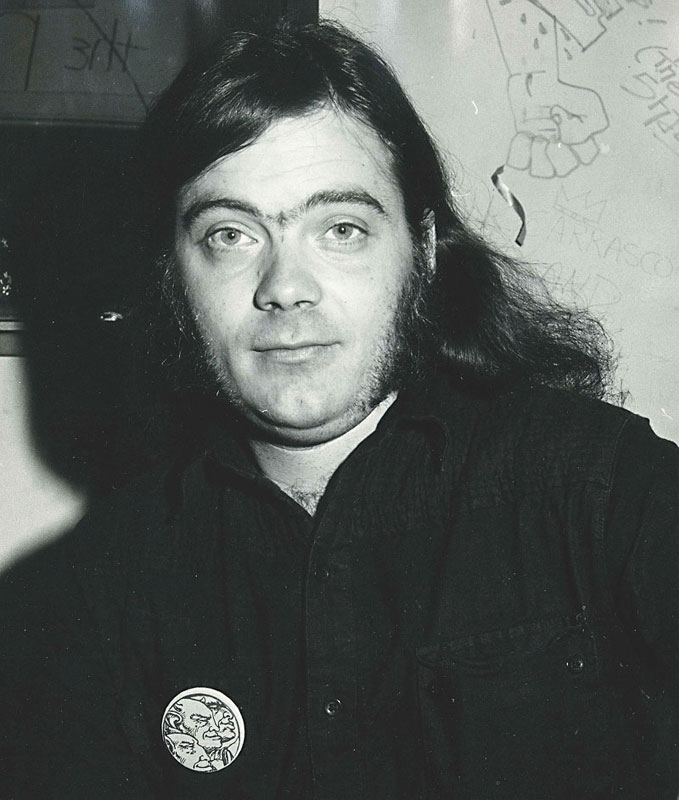 Read part one of Tim Stegall's history of Austin punk and see how pshchedelia turned into something a bit scarier.

A Gathering of Texans

Bill Miller proved hard-pressed to disagree, although it meant the death of Bleib Alien.

"Nobody took [Roky] seriously until we did that first gig," Miller told Ben Graham in his history of Texas psychedelia, A Gath­er­ing of Promises. "It was fortunate Roky left Austin when he did, because there was just nothing there for him. There were just people who wanted to water down what he was doing."

Freda & the Firedogs' Bobby Earl Smith, who witnessed a reconstituted Elevators tear up a festival bill their bands shared, remembers it differently.

"People loved Roky Erickson in Austin," he says. "They were so excited to see him after he got out of Rusk [State Hospital]. There was lot of love for Roky here."

"Dad was great about that," notes youngest son Shandon Sahm, a notable rocker in his own right dating back to Nineties metallurgists Pariah and later Southwestern acid punks the Meat Puppets. "He could promote himself all day, but he would also promote his friends: 'Aw, man! You gotta hear Flaco [Jimenez], man! He plays that accordion, that polka shit!'"

Sahm guested Erickson with a reunited Sir Douglas Quintet during a three-night booking at Hollywood's Palomino Club, July 18-20, 1975. Creem writer Gregg Turner retrospectively recalled Erickson as "a super-rocking Dracula" in his black cape and Rasputin-like hair and beard. He roared through "Two Headed Dog," "Don't Shake Me Lucifer," "Starry Eyes," and "You're Gonna Miss Me," astonishing all with his impassioned intonations. The performances convinced Sahm's tour manager, Craig Luckin, to administer Erickson's publishing with an eye toward relocating the horror rocker to California.

“I remember Roky describing the shock treatments he got in Rusk to me, saying that when they flipped the switch, it felt like a brick hitting him upside the head.” – Shawn Sahm

"They were friends," says local historian and author Joe Nick Patoski of Erickson and Sahm. "The Elevators and Quintet had played together out in San Francisco at the Avalon in '67. Doug, in my mind, encouraged Roky to come out of his shell, start a band, and play this gig, and definitely talked him into recording."

"I remember Doug bringing Roky up to his house behind Soap Creek Saloon, this beautiful two-story house on five acres he rented forever," affirms Shawn Sahm. "I remember Roky describing the shock treatments he got in Rusk, saying that when they flipped the switch, it felt like a brick hitting him upside the head."

The two Lone Stars returned to Austin that August for a four-hour recording session at Pecan Street Studios, financed to the tune of $500 by Sahm. Reuniting Erickson with Bleib Alien, Sahm produced and contributed chugging guitar warped by an overdriven phase shifter. Patoski observed. 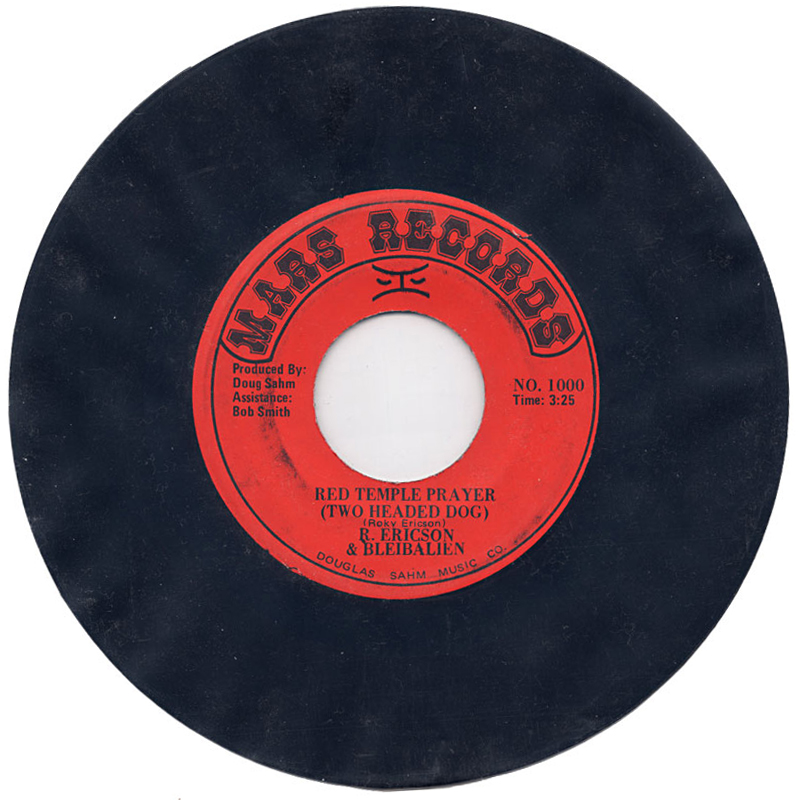 "I walked in, I don't know many hours into it," he says. "My memory is of all these crazy people running back and forth. You're in this room, everyone's getting high on weed, it's crazy and noisy, and here comes Billy Bill Miller. I don't think I'd met him before. He's running around, strumming his autoharp, and someone else is criss-crossing in the other direction with a guitar.

"And it's just twanging and noise. There's no organization! And with Doug at the top of the organizational chart, you know it isn't getting organized. This is Doug in control, and that's the way he operated."

"He helped a lot – rolling joints," says Miller of Patoski.

"My overriding memory of the session is the joy in the air," chimes in Bobby Earl Smith, a frequent partner in Sahm's adventures before becoming one of Austin's finest attorneys. "You don't hear 'joy' used a lot to describe rock & roll bands, but they were joyful. They were so happy to be together. They were so happy to be recording. Rock & roll is supposed to be fun, and they were having fun."

Sahm rang up Smith that morning, asking for help with the session. Smith says his major role consisted of tapping his host on the shoulder after many havoc-wracked hours, because the engineer had advised him that although they were getting a sweetheart deal on recording time, once the clock ran out that was it. For being the voice of reason, Smith received a co-production credit as "Bob Smith" on the final release.

"Ninety percent of the record would be in his head," Shandon Sham says of his father's work methodology. "If Roky or the band had a part and it was good, I'm sure he'd use it. But on his own sessions, for which he usually had whole arrangements already in mind, Doug would go over to the horn section and tell them, 'I want bee-dop-boop-dah-dah in that bar.' They'd play bee-dop-boop-dah-dah, and he'd say, 'Yep, that's it!'"

"Two Headed Dog," on the other hand, slammed its VU meter into the red. Everything's compressed to hell and smashed flat against your face. Sahm's churning chords slam against Miller's fuzz-drenched autoharp, more dangerous and sharp-toned than Tommy Hall's amplified jug.

For his part, Erickson yowls like a man undergoing electroshock therapy: "Two-headed dawg, two-headed dawg, I've been working in the Kremlin with a two-headed dawg!" Here's a man standing on a cliff, seeing nothing but a void below and fixin' to gleefully swan-dive in anyway.

"I remember when it came out," says Shandon Sahm. "For some reason, the black lettering with the red label stood out. It got played for a while there at the house down from Soap Creek. Dad had this nice Seventies stereo. We listened to the first Kiss album on that one, too."

Before long, Roky and Dana relocated to the Bay Area, Erickson leading new hard rock band the Aliens, managed by Luckin. Miller joined in the new year, adding his corrosive autoharp to an audio assault resembling the head Alien fronting Blue Öyster Cult. As 1976 wore on, the 7-inch intensification of Erickson's gifts began reaching important ears, all of which tuned into the fractures forming in Seventies rock's slick facade and cheered on the thorny weeds sprouting from the cracks.

“Neither Erickson nor Doug Sahm qualified as punk rockers, but like Lou Reed, they helped set the stage for the music revolution of the late Seventies.”

British chronicler of sonically violent and dark-toned rock for the NME, Nick Kent, pronounced "Two Headed Dog" a "vision of psychotic dread ... a record of unique mood and power." Rolling Stone reviewed it alongside a new UK export titled "Anarchy in the UK," calling it a prime example of this new musical movement. Indeed, three years ahead of Austin claiming any homegrown acts of this ilk, "Red Temple Prayer (Two Headed Dog)" stood alongside Patti Smith's "Piss Factory," Television's "Little Johnny Jewel," and Pere Ubu's "30 Seconds Over Tokyo" as one of punk's first independent 45 rpm outbursts. Neither Erickson nor Doug Sahm qualified as punk rockers, but like Lou Reed, they helped set the stage for the music revolution of the late Seventies.

In fact, there's a long history of leaders from previous bohemian movements becoming inspirations and participants in the counterculture's next phase. Witness Neal Cassady, the real life Dean Moriarty of Jack Kerouac's seminal beat text On the Road, becoming driver/muse to Ken Kesey and the Merry Pranksters in Sixties San Francisco. With seven vinyl inches of sonic napalm, Sahm and Erickson similarly nurtured punk's birth locally. As the movement gathered speed, the latter appeared and reappeared as a baseline to the homegrown DIY movement and an influence on punk culture worldwide.

"My older son, John Mark, is an instructor at Texas State," says Bobby Earl Smith. "He was talking about Roky and said, 'Y'know, I can't think of any other artist who successfully made the transition between being an early rock & roll star to punk rock.' Roky did, and was true to its form. He wasn't a dilettante playing at it. He was it."

"That man could smell scenes a mile away!" Shandon practically yelps of his father. "He just had that innate thing."

Bill Miller, another child of the Sixties who'd been waiting for something like this to happen, didn't even realize himself a participant. "In 1975, they wanted to run me out of town," he recalls 44 years later. "Doug Sahm really 'got it,' but did not know what to call it. Roky also knew something new was coming. I could not see it. I wish I had listened more to Doug and also Roky."

"'Two Headed Dog!'" Jesse Sublett raves now. "One of the greatest rock songs ever, and the lyrics are one of the hardest set of lines to fucking memorize – ever. Eddie Munoz brought that single over and the first time I heard it, it felt like my skin was on fire."

The Austin Punk Chronicles will return this fall with chapter two: the secret history of ATX glam rock.

A version of this article appeared in print on August 9, 2019 with the headline: Red Temple Prayer 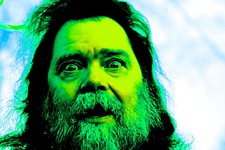