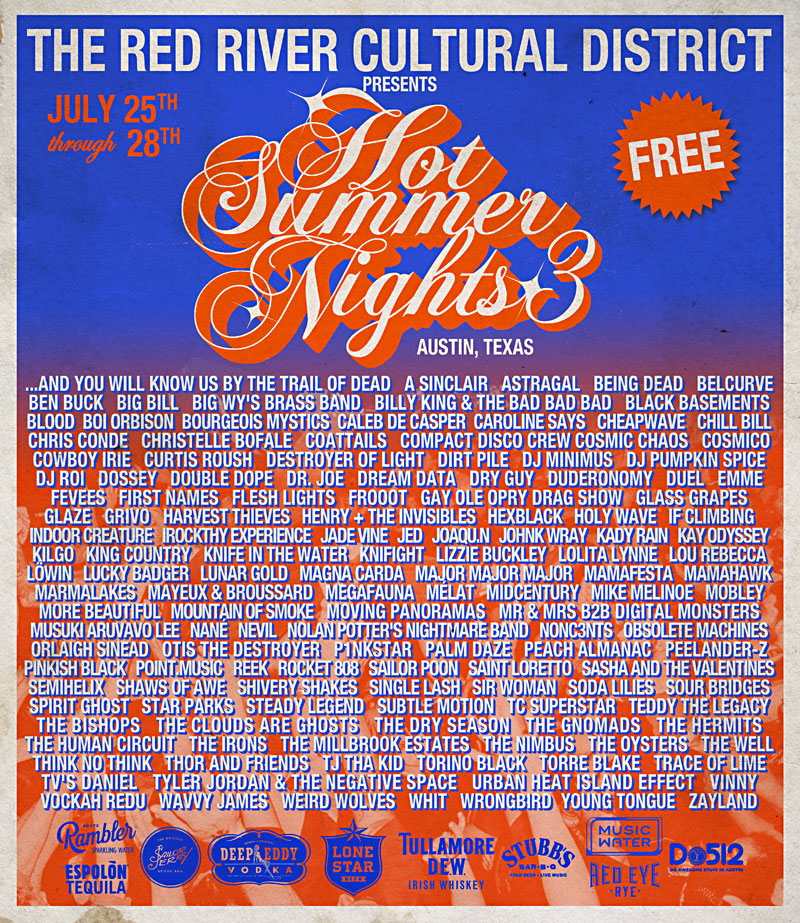 If you're cataloging the current weekend warriors of Austin's Red River Cultural District, the glossary might look something like Hot Summer Nights. This year's huge lineup, some 140 acts, populates the live, original music alternative to Sixth Street weekly, but for the next four days, they perform free. The eight participating venues – Barracuda, Cheer Up Charlies, Elysium, Empire Control Room, Mohawk, Scratchouse, Stubb's, and Swan Dive – present marquee homegrown talent including ...And You Will Know Us by the Trail of Dead, Peelander-Z, Holy Wave, Mobley, Mélat, and Magna Carda, but as Mohawk Marketing Manager Taylor Catherine recommends, "It's about discovery."

Increased sponsorship helped the 28-year-old market the event, now in its third year. Catherine has watched the backing Red River Cultural District Merchants Association grow since its 2016 founding by venue owners to include hotels, restaurants, and organizations like Waller Creek Conservancy. Upping foodie participation, board member Faraz Vohra of Seventh Street truck Shawarma Point coordinated a 20% discount at all district eateries for the weekend.

Catherine hopes to establish the festival as a summer staple in Austin. This year, Barracuda hosts a Feels So Good vinyl & clothing fair on Sunday at 2pm, and Mohawk's annual Quesoff commences at 1pm on Saturday.

"It's growing into a community block party," enthuses Catherine.

"By coming together as venue owners and getting funding, [Scratchouse] can book a bunch of great bands that we typically wouldn't be able to," explains Elkins, whose space previously housed Holy Mountain. "It brings out a new crowd that hasn't been to this venue in a long time." 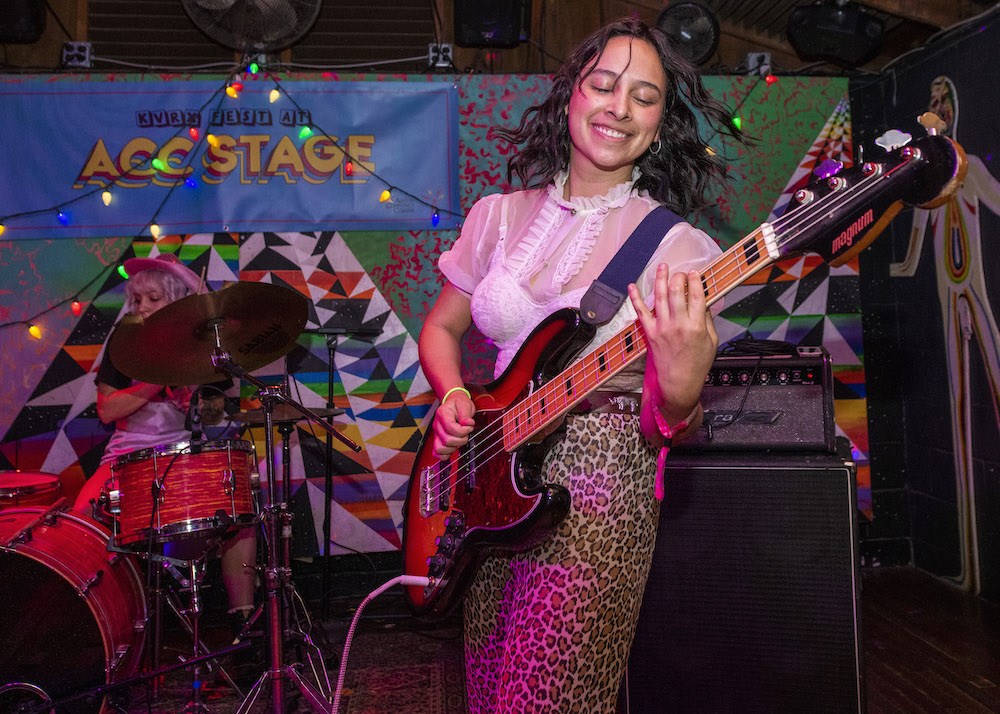 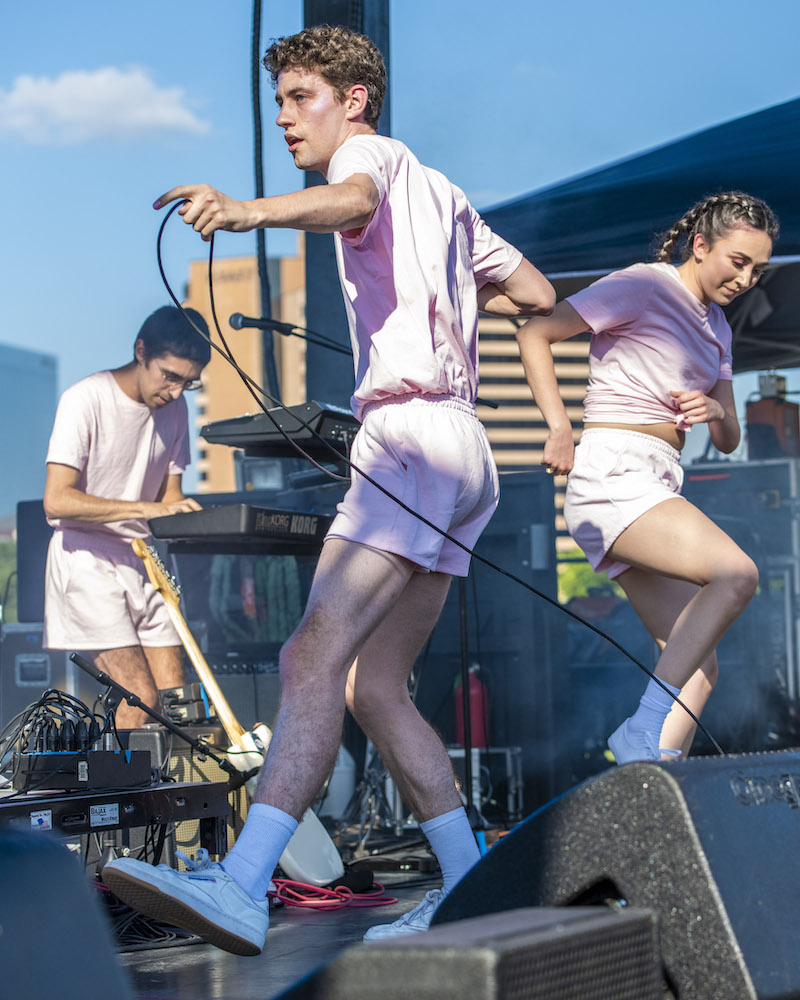 Saturday 27, Barracuda
Cody Dosier and Juli Keller team up for feisty garage rock, swapping drums, keys, and guitar in a hyper flurry. Chanting lines that would be silly if the songwriting wasn't so dang smart, Being Dead introduced their wacky interests with the absurdly ceremonial video for "Apostles' Prom."

Saturday 27, Scratchouse
Originally from Mexico City, Paty Gomez-Palacio began making mixes for her friends while studying at UT. After finding larger audiences at frat parties, the DJ now creates her own EDM as Frooot, with high-gloss beats and chatty vocal interludes. "Can I Hit Your Juul?" inquires, "Is that a fresh pod? Wait, and it's mango?"

Sunday 28, Empire Control Room
Austin native Dom "Teddy" Woodson launched online with chilled-out raps and prolific SoundCloud output like "4am in Foxys" with frequent collaborator Cedd Bo$$. The 24-year-old hyped the show on Instagram: "last year i made it one of my goals to perform at [Empire Control Room] n i finally am."

Digital Tip Jars will be distributed to 10 local musicians for Austin's new "Tip the Band" program. Of over 100 applicants, the guinea pigs are: Atash, Church on Monday, Derek Phelps, Gina Chavez, the Human Circuit, Jackie Venson, Kathy & the Kilowatts, Superfónicos, the Watters, and Will Southern. Try it out at their shows starting August 1. In a press release, Music & Entertainment Division Manager Erica Shamaly wrote: "Research shows additional steps, like opening an app and searching for an account, decreases the likelihood of fans following through on tipping. This pilot will be an invaluable opportunity to see if this tool works to add more income to musicians' existing compensation."

Austin Terror Fest, whose third iteration in June behind headliners including Panopticon, Church of Misery, and Alcest broke out the festival beyond local borders, rebranded last Friday as Oblivion Access, emerging from under the Northwest Terror Fest umbrella as an independent event. Co-booker Dusty Brooks reports having locked down one major 2020 headliner already.