Ray Prim Finds His Voice in the “Black and Blues” 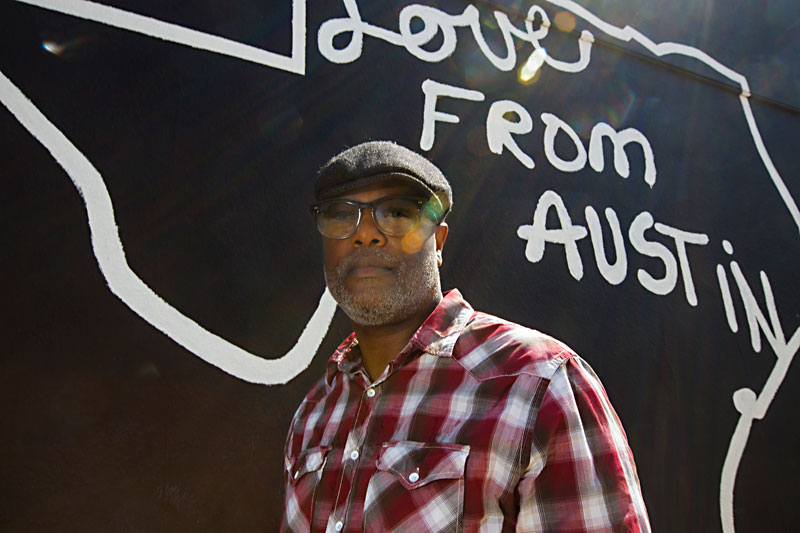 "I swear, if I could do it, I'd be a rapper," claims the longtime Austin resident from Poughkeepsie. "Making something sound good without sounding corny is such a skill."

Prim continues explaining this failure with such precision that you can feel the pain of his self-reckoning. Whether he's abnormally harsh on himself or understands that cutting honesty isn't necessarily self-flagellation isn't clear. Obvious, however, is that Sherman Ray Prim Jr. knows what he's not.

From a North Central Austin home studio he half-jokingly calls the "Ghetto Lounge," the self-proclaimed singer-soulwriter considers his eclectic musical preferences and discography. Following a meandering haze of uncertainty in both the form and function of this artistic output, Prim gathers that at age 48, he's only just figured out who he is as a recording artist and performer. Unconditional, his fifth solo effort, represents near-fulfillment of the promise first shown on earlier albums – which "are horrible," by his recollection – as well as his 10 years of intensive labor in local hard rock outfit 7 Stones.

The latter, he believes, typecast him for years afterward.

"I should've never been in a rock band," he admits.

His arrival in early-Nineties Austin pivots on deceptive advertising and hormones. He came down for a visit and wound up at a UT frat party. In a stupor, he fell out of a swing and rolled down a hill.

"So I came down and it turned out, of course, that wasn't true at all."

Witnessing Depeche Mode live in 1990, the Washington, D.C.-born singer began crafting songs. Tired of assisting him on his homemade Casio keyboard tracks, a neighbor suggested he join a group. Prim linked up with guitarist Jason Smith to form 7 Stones, but after a decade-plus of touring, three largely forgettable albums, and mentorship from Doug Pinnick of progressive metal Texans King's X, he realized "one foot in, one foot out" held no future for him.

"[Smith] played his music, I played mine, and we thought, 'We can do this,'" he says. "I wasn't gonna do rock & roll, but, honestly, he was the only person who was interested in working with me."

Rediscovering his lyrical center in a calmer acoustic setting – being honestly heard without rock guitar – set forth another path toward personal redemption. In this singer-songwriter iteration, mounds of material made each succeeding project an improvement over the previous one, diverse sounds and voices piling atop one another. While 2017's affirming To Whom It May Concern signified a great leap forward, Unconditional evolves, refines, and crystallizes his rich, Bill Withers-esque amalgam of soul, pop, R&B.

What stands out most is the exceptional generosity within his platform. Whether live or on record, Prim willingly cedes an immense amount of ground to the talents of others in his orbit. Most prominent among that circle – one that can swell up to 10 people onstage – remains vocalist Mike Robledo, who'd lost his will to make music before Prim brought him into his band.

"He'll always say that I'm the better singer between the two of us, but it's not an ego thing," states Robledo. "He's going to do whatever's best for the song. As the songwriter, whatever's the best way for somebody to feel the message or get to the perspective he wants you to hear, that's what he's gonna do."

"When he writes the song, there are no string parts," says Steele. "So we go into it together and experiment, which for me – as a classically trained person – is a new concept. There's an element of freedom and almost, like, fearlessness, because it's okay to make mistakes. Sometimes this is how you stumble upon something cool."

At heart, he’s a rapper trying to convey deeper meaning through words, but he understands the limitations in both himself and his chosen singer-songwriter medium.

Between the tamer lines spoken on Unconditional, Prim takes great care and pleasure in hiding knotted messages of love, race, and uncertainty. At heart, he's a rapper trying to convey deeper meaning through words, but he understands the limitations in both himself and his chosen singer-songwriter medium. If the sounds from Unconditional rip and run from genre to genre, that's because Prim refuses to be nailed down by genre, no matter the toll.

"I know it's probably hurting me, but I told myself when I quit 7 Stones, 'I'm not going to write or not write a song because it doesn't fit a certain way or an audience.' At this point in my life, I want to make music that I want to hear – what I want to play in my car."

The Ray Prim Trio plays tonight, Thursday, July 18, at the Half Step, 75½ Rainey.

A version of this article appeared in print on July 19, 2019 with the headline: Stop Frontin

Ray Prim
To Whom It May Concern (Record Review)