Faster Than Sound: Willie and a Movie Lost Western flick Red Headed Stranger never made it to DVD. Following a limited national release in 1986, the onscreen adaptation of Willie Nelson's groundbreaking album by the same name isn't on any streaming platforms. Despite critical shrugs, the drama's Wild West set lives on as Nelson's far-out event venue of Luck, Texas.

In a post-screening Q&A with the legendary country songsmith, moderating journalist Andy Langer offered: "[Wittliff] was one of the few people, allegedly, that could give you direction and you would take it."

"Well, I was acting like I was taking it," quipped Nelson in an evening of good-humored one-liners, some seemingly because the singer couldn't hear the questions too well.

In Red Headed Stranger, the star acts out a pretty fair approximation of his real life rough-riding cultural mystique, naturally a bit more trigger-happy. The plot moves slowly and gets pretty flimsy, but watching the gun-slinging proceedings where they were shot proved extremely special. And at this point, every opportunity to see the 86-year-old star in person is worth a drive.

After onscreen Nelson settles down with a single mom played by Katharine Ross, the real guy emerged on the front porch of his old-timey "gambling hall." When asked about his viewing experience, he said: "I was thinking, who is that old bastard?"

Nelson offered quite a few golden nuggets on his acting game: "I never looked at myself as an actor – I'd react a lot," "I grew up singing with Gene Autry and Roy Rogers and all those guys – I felt like I was a singing cowboy before I could sing, or ride a horse, but I acted like I could," and, finally, "Acting is a whole lot easier than golf."

Back on set, Davis recalled: "We do a couple of run-throughs and Bill Wittliff takes me aside. He says, 'You've been on the bus, haven't you? Well don't look so happy, you're getting thrown in jail!'"

The conversation recapped the movie's notoriously rocky road to actualization. Universal Studios gave the green light on a $14 million version starring Robert Redford ("he chickened out," explains Nelson), then HBO took a whack. Finally, Wittliff and Nelson struck out on their own with $1.8 million in fundraising.

Slim finances called for a family affair. Nelson's daughter Lana designed all the costumes and his grandson Bryan Fowler took the leading child role. Of her dad's lifelong hustle, Lana said: "He's the hardest-working guy on the project. He puts in the most hours, the most worry, the most energy, so everybody else has just got to do it too."

To big ending applause, she added: "It's all for people that love him, because he loves them too." 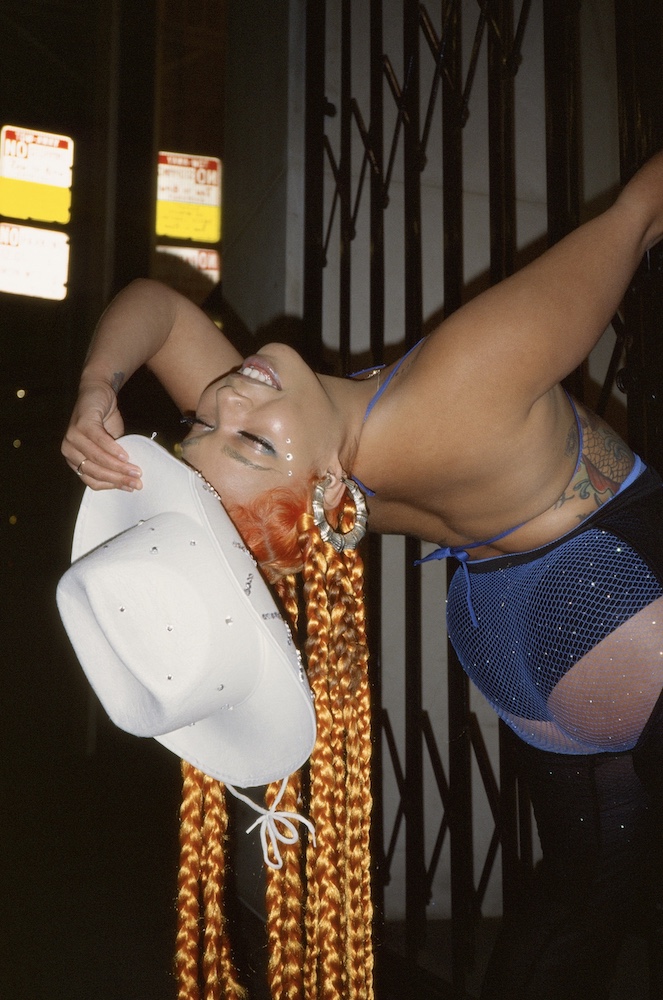 Built with a free beat off YouTube, "Water" was Michaela Taylor's first stab at songcraft. The 2017 track got her invited to debut live as rap pseudonym Ladi Earth, and it's since ended up on Natasha Lyonne's Netflix sensation Russian Doll. Taylor now heads for her first headlining show, July 18 at Stubb's Indoors, shared with L.A. artist Nick Jordan.

"A lot of shit that comes in my life, I don't really look for it," admits 24-year-old Taylor. "I have little visions and just be like, 'Oh, that'd be cool.' Ladi Earth isn't a character, so it's easy, because it's me."

The statement holds true in her getup when we meet at a coffee shop: sky-high lashes, turquoise hair, and a bikini top. The night before, she read The Cat in the Hat at a Stripped Storytelling event wearing only the hat, whiskers, and tie. After growing up in the small town of La Marque, Texas, Taylor relocated locally for college and found her niche performing at gallery events.

"I was always doing art shit – I used to take pictures, wanted to direct, and for a while I was DJ'ing," she says. "I change every day. I think that's why my songs never sound the same."

Missing the nuance in her sexual themes, guys often message the artist about collaborating on what she calls "instructive twerk songs." A twerk teacher herself, she's not into bossy, hard-hitting raps. Instead, she'll go for "something with dope-ass bass, where they're using their voice as an instrument."

"Sometimes I feel like social media pressures me to fit in a certain category and that's when I'll struggle," Taylor adds. "I make my best music when I haven't listened to music in a couple of days, because it's just purely me."

Jon Dee Graham was hospitalized for cardiac arrest following a July 4 performance in Chicago. Tuesday, the Skunk and True Believer turned heavy songwriter revealed, via Facebook: "I was only dead for a little while! No really, my heart stopped & they had to revive me, but I'm feeling better." He's booked to play Saturday at the Saxon Pub. Pleasure Venom at the Aztec Theatre in San Antonio on May 12, 2019 (Photo by David Brendan Hall)

Pleasure Venom shared a shocking rejection email from London venue the Underworld Camden. According to the punk band's Instagram post, booker Patrice Lovelace wrote: "We try to avoid bands that play into too much identity politics tbh... I feel really uncomfortable about bands playing the race card to sell themselves as something unique." She also attacked the band in social media comments. Lead singer Audrey Campbell responded: "This simply put is discrimination. Period."

Ryan "Rhino" Walker, longtime bassist of local groups like Bad Mutha Goose and Rockbusters, died of a heart attack on June 30. In 1992, the Chronicle said of the latter act: "Rhino powers the groove machine with his mighty thumb," also noting his "Satan-simulated background vocals." Walker, who moved to Austin in 1980, wrote us a 2016 letter to the editor complimenting: "Stuff like this in the Chronicle is why I canceled my American Snakeoilsman subscription decades ago."