Los Coast Doubles Down on Its Psych-Soul for Label Debut 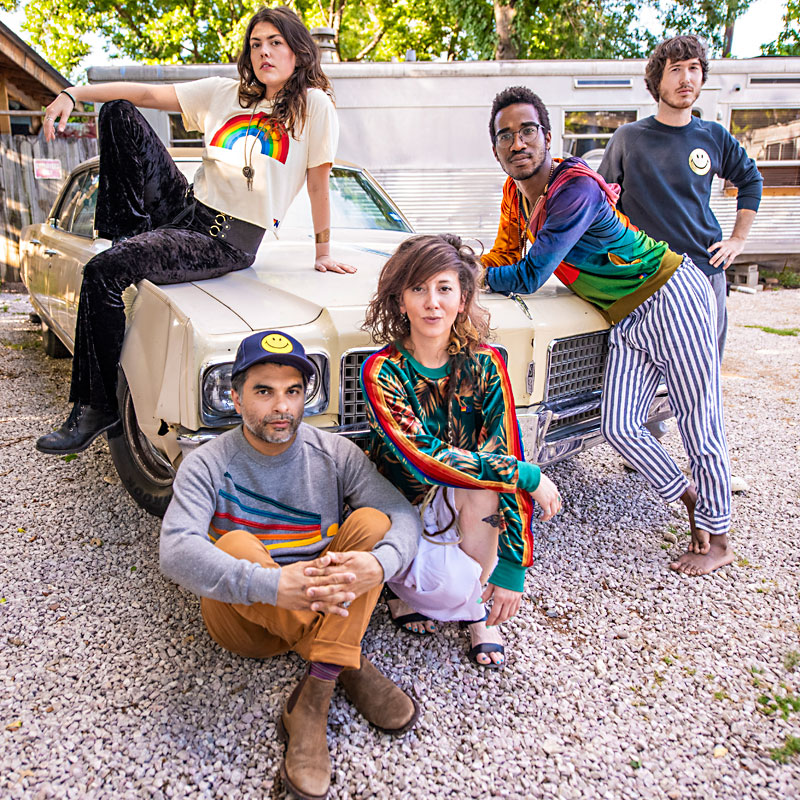 In the most acutely essential and appropriate way possible, Los Coast sounds ... unsettled.

Under ordinary circumstances, an album reflects where an artist stood emotionally before and during creation. Los Coast's debut for New West Records, the rewarding Samsara, strikes rightfully present in both rhyme and reason. Saltatory in all directions for the psychedelic soul crew, the album whirls into John Courtney's elaborate, idiosyncratic arrangements, ranging from jump blues to electro essences bellied out by bassist Megan Hartman, drummer Damien Llanes, and keyboardist Natalie Wright. Frontman Trey Privott then converts it all into a polyptych of hymns and anthems.

The title Samsara is a fundamental idea of birth and rebirth in all Indian religions, linked to karmic theory and translated as “wandering.”

The latter bears a story to tell, some of it growled, some howled in a devil dog's rage, and a goodly portion of it held close to the vest. The title Samsara is a fundamental idea of birth and rebirth in all Indian religions, linked to karmic theory and translated as "wandering." Privott makes subtle mention of the "land of Nod."

Chapter four of Genesis recounts the story of Cain and Abel. When the former slays his brother, God places a mark on him to prevent retribution for his cardinal sin. Cain then cast himself "away from the presence of the Lord and settled in the land of Nod, east of Eden."

In this original context, Nod isn't only a physical location but a state of mind, because it too means "wandering."

Born Willis McCoy Privott III on Sept. 21, 1989, in Chesapeake, Virginia, the future Austinite soon relocated to the Columbus, Georgia, metro area. Tonya and Willis II opened in a pediatric practice in the region and added a daughter, Tiffanny, to the household. Much later, they all moved to Phenix City, Alabama, a bedroom community for commuters just over the Chatta­hoo­chee River. "You couldn't even call it a suburb," quips Trey. "They don't even have a grocery store."

Nephew of late jazz fusion guitarist Hiram Bullock, the singer revealed his gifts soon enough, says his mother. As such, she and his father got him guitar lessons.

"He said he couldn't learn anything [from the instructor]," recalls Tonya, who characterizes her firstborn as a jovial spirit who never met a stranger, yet never gives away too much about himself. "Trey was already beyond him, so he just never went back. He didn't need anybody."

After graduating from Brookstone School, a private college preparatory school in Columbus, he enrolled at the University of Alabama to fulfill a promise to his mother. He chose journalism as an incubation method to "figure out a way to put all these [musical] ideas I had together." Mrs. Privott remembers her son couldn't escape the area fast enough after graduating.

Though passionate, Trey's musical options proved limited. He'd been in a straightedge punk/hardcore "church" band, in part due to Willis II's deep Southern Baptist religiosity, and because "it was the only music we had access to." Even as he packed up a U-Haul to drive to Austin from Seaside, Florida, where he'd been playing every day and working at a record shop, Privott knew he was venturing into completely unknown territory.

There he met a fellow wanderer.

Fascinating to watch a young man with the world in front of him chain smoke American Spirits at 4pm. If John Courtney, 30, doesn't have anxiety, no one ever did.

The Berklee School of Music, University of Colorado, and University of Texas Law product and Houston native is used to finding a way around, managing. His father, John P. Courtney, wanted him to partake in the family law business as generations prior had. At UT, the younger John concentrated on entertainment law.

The great irony is that his father put the notion of music into his being. Besides providing his first instruments, John Sr. instigated a game wherein they debated what parts made hit songs work. Both used music to cope with the death of his spouse to skin cancer.

"If I hadn't lost my mother, I would probably be an attorney, because the way that music became all-encompassing was in the years after her death," discloses the guitarist. "I had these emotional moments with my instruments. And I could feel it in my household, because [my father] did it too. The house got dark and quiet at times, and then he would play the piano and I could feel him expressing his grief."

Law became a point of contention between the two men – and continues today, even if the elder warmed considerably to the news of a deal from a respected indie label. Up to that point, he hadn't seen his son's band perform.

"I think he was holding out, but it was a cool moment," says the bandleader.

"The traction and growing recognition is more of a validation that [John's] work and talent are adding up to something worthwhile and productive – things any parent would want," he offers.

"At the end of the day, he was doing what he thought was the right thing to do, which is to send his son into a world that is lucrative and consistent," says the composer and multi-instrumentalist. "[However], I think in the back of his mind, the whole time, he thought, 'How cool would it be if my son turned out to be a professional musician?'"

In the Service of Others

The business relationship and friendship between Privott and Courtney retains tension. Privott's face situates front and center in marketing copy, but Courtney and the other members of Los Coast understand "the game." There's got to be a focus for the media and industry.

"At the end of the day, Trey is the spokesperson," explains Courtney. "And he's got this grand artistic vision. But there's a reciprocal thing, a kind of a yin and yang between us, because the nitty-gritty of it – the sound of the band – is still my territory."

Now that there's practical business to attend to, this new republic of Los Coast puts Privott and Courtney as more equal than the others. Part of the former's anxiety lies in this continual balance of friendship and the commercial aspects of band maintenance.

"One of the hardest parts is remembering that this has to be sustainable," declares Privott. "It [has to be] built to last. People have invested time and energy. People depend on it more now, so you can't just let the thing fall apart based on a random disagreement. You also have to get to the bottom of [the issue] and have everyone be heard."

Courtney serves as a tether for Privott's high ambitions. Some days, disagreements are unavoidable. He admits something unlocks through his musical partner's demands.

"Some days are just impossible, but it's cool because while he approaches circumstances in that lofty way, he'll have suggestions that I wouldn't have thought of because I'm thinking very practically about it," states Courtney, who never asks what Privott's lyrics mean. "It's like, 'Well that's in A-flat, and then the next song is in G. That's not going to work.'

The Sons of Adam

Samsara is the album of the brief lifetimes of both Privott and Courtney, who bassist Megan Hartman calls a "power team ... a good, balancing brother duo." All five members figure heavily in the soulful and punchy hybrid of Seventies' funk, electronic psych, and old-school R&B. Jacob Sciba, the album's producer and chief engineer at Arlyn Studios, wound up helming a massive restructuring on the primary material once New West got involved.

"I told Trey from day one: 'Man, I think you got to think about this, put the screws through it, and take a wilder, heavier approach on it," reveals Sciba. "We ultimately rebuilt all the songs from the ground up to where there's little resemblance to [the original project]."

Los Coast appears to be on the cusp of more, something both Privott and Courtney are well aware of. The weight of expectation and their individual divergences hang in the phrasing, the fidgeting, the chain-smoked American Spirits. They're this close, and also this far, from a finish line that hopefully begets more of them.

"I've been thinking more recently about the difference between pleasure and happiness," says a meditative Privott, sun beaming onto his brown face. "I believe happiness is the step after pleasure where you feel at peace, like, 'OK, job well done.' Like when you build that house, you're like, 'OK, I can live in this now.' I want to find that happiness out of this, which I think, at some point, I'll know what it is when I see it.

"I still have more work to do, and there's always work, so I don't think I can live in the house yet."