Zoltars' frontman and Ghetto Ghouls' guitarist come together in the hypnosphere 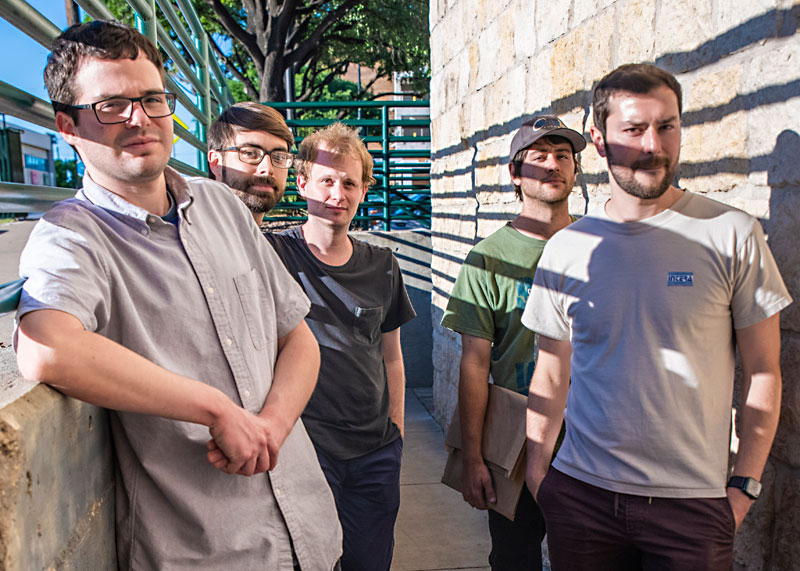 Jared Leibowich can't contain his excitement. The quixotic local animates just short of giddy about the Infinites' debut album finally being out and its accompanying two-week tour of the Midwest and East Coast next month. He's even still thrilled about discovering Austin guitarist Dan LeVine's loop project, which he says swept him away when he first heard it more than five years ago and now serves as the foundation for the Infin­ites' hypnotic soundscapes.

"Every few years, there will be something that gets me really emotional and, for whatever reason, sticks to me, reinvigorates me, reminds me how much I like music," recalls Leibo­wich emphatically about first hearing LeVine, string-bender of Austin punk outfit Ghetto Ghouls, at a house show. "It was like this whole other side of Dan that he kept hidden. He's very introverted and soft-spoken, and he had this secret thing that was phenomenal."

Cerebral, good-natured, and instrumentally gifted, Leibowich remains a scene staple since moving here in 2008 after graduating from the University of Chicago. Having experienced a seminomadic childhood, with the bulk of his formative years in South Florida, he moved to the Texas capital intending to pursue film, but instead chased music every night and ultimately swapped visual narratives for sonic storytelling. Best known for leading the weirdo character-pop of the Zoltars, his discography also explores an understated vulnerability as a solo artist and high-energy indie rock for kids as Jarebear.

The Infinites too ride character sketches, these underlined by LeVine's brainy guitar work. That plays out in a honeyed dreaminess skirting retro-pop. It's amongst either musician's most dazzling music so far.

Currently pursuing a Ph.D. in geography at UT, LeVine approaches his repetitive, abstract instrumentals like landscapes, building hazy, subtle, surf-y intricacies influenced by early-Aughts indie rock as well as the compositions of Steve Reich and Dustin Wong. The Infinites name nods to the nature of their six-string loops, but fits the bill doubly considering how long the band's debut took to materialize.

The guitarist uploaded a handful of songs to Bandcamp in late 2014, which prompted Leibowich – unsolicited – to send makeshift recordings of himself singing over the tracks. LeVine hesitated until hearing "Scott McMurray," wherein a boy eschews love in favor of reading on the floor of the library's sci-fi section. The duo began playing out as Dan & Jared in late 2015, and by May 2017 recorded their debut with Ghetto Ghoul member and audio engineer/producer Ian Rundell.

Thereafter, when Leibowich and LeVine rebranded as the Infinites, they recruited a full band for the live shows: Rundell on guitar, drummer Sam Jordan, and bassist Miles Kelley. Everything proved smooth sailing until Leibowich saw the potential in recording the album with a full group and pushed to redo the LP. Rundell bears repute for his rapid-fire ability to churn out professional recordings, and LeVine recounts how the producer completed the most recent Ghetto Ghouls LP in just four hours. Re-recording sometimes felt tense, an unfamiliar path spread across several months, but the final mix impressed all band members.

"Jared is such a perfectionist," notes LeVine. "He's the reason I'm really proud of the record. Every time we listened to the mixes, he was like, 'We need to fix this, this, this, and this,' and Ian and I would say, 'I think it sounds fine,' but in the end it was worth it. It's way better because of all those details Jared picked up on. He has ears like no other – like a bat."

Bat man is all too self-aware of his high standards. Leibowich calls every release a sonic photo album, an eternal work, and refers to the Infinites as a crash course in respectful collaboration that yielded strong bonds. After a release day in-store at Waterloo Records on April 26, he mentioned the band's plans to camp out near Krause Springs the next night to celebrate the release.

Key to the final product, Leibowich isn't playing guitar, which means he's freed up live for polite, mild-mannered dance moves that recall Jonathan Richman. Thus unburdened by an instrument, his vocals also hit their most crystalline. At Waterloo, the Infinites played through the debut in its entirety, documenting 11 fully-formed characters in under 30 minutes. There's the introductory lovestruck ode to "Nina Segov­ia," the sleepily sinister "Ryan Fontaine," a mysterious specter in "The Man With No Name," and the brooding depression of "Polly-Anne Parker."

Most of the lyrics brainstormed in Leib­owich's original voice memos ended up on the album.

"He's got such a knack for lyrics and storytelling," says LeVine, who keeps a Google Drive with hundreds of loops that Leibowich can hear, and enjoys accessing the temporary titles his compositions receive: "Air­plane Taking Off at Dusk," "Alien Play­ground," and whatever else pops in Leibo­wich's constantly whirring mind.

For his part, the latter hopes that the next two years liberate two already-completed Zoltars albums, a solo LP, a sophomore Infin­ites full-length, and a new release from Jarebear. The through line imbuing the Infinites and Leibowich's music is a singular sweetness, a trademark of his, and a parallel to how he seemingly inhabits his day-to-day: with earnest dedication, free of cynicism, mining beauty from minute details.

"You create this world, you create this character, and it came out of thin air," waves Leibowich. "Then all of a sudden you end up getting emotional about this thing, you know what I mean? For whatever reason, I really enjoy that."

A version of this article appeared in print on May 10, 2019 with the headline: Airplane Taking Off at Dusk