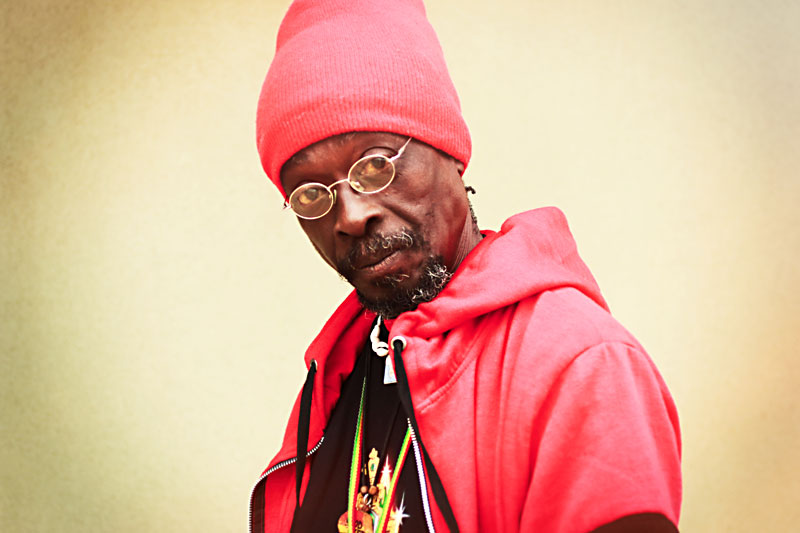 At Selam International Mart & Cafe, a small Ethiopian restaurant and grocery tucked away in a North Austin strip mall, East African spices line the shelves and a picture of Ethiopian emperor and Rastafarian messiah Haile Selassie I hangs above the cafe counter. The aroma of stewed lentils, roasted chickpeas, and sauteed greens – Ital food for a Rastaman – fill the air and nourish the belly of 63-year-old Errol Bennett.

Born in Kingston, Jamaica, the man better known as General Smiley – one half of the pioneering dancehall reggae duo Michigan & Smiley – calls Los Angeles home, but these days spends nearly as much time in Central Texas. In February, Smiley celebrated his birthday onstage at Flamingo Cantina for the second time in as many years, backed by Lakandon, his ace Austin band which rose from the ashes of Dub Gideon. Anchored by the drum and bass of Gilbert "Ras G" Anthony and Nicolas Sánchez of Superfónicos, Lakandon lays down brick-heavy riddims for the General to ride like a conquering lion.

Smiley navigates Austin anonymously, but four decades ago he became a bona fide superstar in Jamaica. As Bob Marley and Jimmy Cliff ascended to global stardom, deejays began dominating the island music scene, toasting over instrumental dub versions at soundsystem sessions and eventually cutting records of their own.

"Michigan & Smiley actually started dancehall in 1978," Smiley boasts of the sound he helped pioneer. "In 1977, Ranking Joe, U-Roy, I-Roy, Prince Jazzbo, Dr. Alimantado – all of them – they were toasting. We changed the toasting thing to composition. We don't toast on the riddim. We made a song for the riddim, and that's how we changed the whole thing."

The live exploits of Michigan & Smiley landed them a session with Clement "Sir Coxsone" Dodd at Studio One Records. Debut single "Rub-a-Dub Style" shot to the top of the charts in 1978, while "Nice Up the Dance" – upcycling a 1967 Sound Dimension instrumental – followed suit a year later.

Me come to nice up the area.

Me come to nice up Jamaica.

The Studio One boss put the pair on the map, rebranding them in the process.

"When we first went in, it was Papa Smiley and General Michigan," details my lunch companion. "Coxsone looked at the two of us, pointed to me with his big black fingernail, and said, 'Yo, you the general!'"

Michigan & Smiley look every bit the Jamaican Run DMC on the cover of their 1979 debut LP, right down to the track suits, gold chains, and fedoras. From toasting to deejay-centric block parties, the dancehall and soundsystem culture deeply influenced the early days of hip-hop. No coincidence Kingston-born Kool Herc, Grandmaster Flash, and Afrika Bambaataa all boast Caribbean roots.

By the time Michigan & Smiley unleashed 1980 single "Diseases," an infectious Roots Radics missile threatening Jah's wrath on the ungodly, the pair carried enough clout to catch blame for a subsequent polio outbreak in Jamaica. That year also saw the release of "One Love Jam Down" on Tuff Gong subsidiary label 56 Hope Road, named for the uptown address of Marley's mansion and studio.

"Bob and I were close," Smiley recalls. "We hung out in the evenings at 56 Hope Road when everyone was gone. I don't hang out at Studio One, I hang out with the Rasta people, and Bob liked our thing."

The song called for unity, but the political fallout caused Smiley to leave Jamaica for good: "It was about the people having a chance to go uptown. There was a time when a poor man couldn't go above Half Way Tree or you get locked up by the police."

Reverberating all the way to Texas, one of Austin's first reggae bands, the Lotions, covered the tune to packed clubs.

"We just thought it was the most wonderful thing," delights Alan Moe Monsarrat, who fronted the Lotions in the early Eighties and now spearheads the Mau Mau Chaplains. "I never heard of Smiley again after that until my friend brought him up here for a show."

Fresh collaboration under their belts, Monsarrat is part of a core local community that makes Austin feel like home for Smiley. So is Carson "McPullish" Hoovestol, a producer Smiley compares to dub pioneers King Tubby and Scientist. When Smiley rolled through Austin on tour in 2008, McPullish convinced the dancehall veteran to follow him to a ramshackle hillside studio outside the city limits for a late-night recording session.

"We were sitting on the couch and McPullish come over and said, 'This is Willie Nelson's finest,'" Smiley remembers. "I roll it up, smoke it, and the words just come to me: 'Aaaaaay natty, natty!' So that song was inspired by Willie Nelson!"

The pair finished a 2011 full-length on subsequent – and increasingly frequent – trips to Austin. Smiley flexes further Texas connections on forthcoming album Lone Star General with assists from Lakandon, McPullish, Monsarrat, and more. Back at the Ethiopian cafe, he gets introspective.

"Everyday people are my deities," states the singer. "I think a lot about changing people's lives for the better. It's hard to smile when you look at the way the world is. You have to take time out for that. Every time you see the sun, you get one more chance to make things right, make things a little better."

Before leaving, Smiley tries on headscarves and buys several shirts emblazoned with oversized images of Emperor Selassie, Jah Rastafari himself.

"I'd love to get a storefront and sell Jamaican products, Caribbean products," he muses. "That'd be nice. I'd just stay right here in Austin, don't go nowhere. My band is here anyway!"

A version of this article appeared in print on April 19, 2019 with the headline: One Love Jam Down