Most people scrolling through social media read the joke or click the GIF and move on. This 3-year-old chuckle yielded an instantly classic collection of contemporary ATX punk bands – all doing the same song. More or less.

Straight out of Belton in the Killeen/Temple metropolitan area, Wiseass Records issued the 2017 debut of Austin wiseguys Worm Suicide, Too Hung to Fall in Love. They now follow up that band thread with Babies Ruin Bands, Vol. 1, the physical manifestation of a 2016 digital-only release. The compilation's subtitle reads accurately: "17 Bands Doing the Same Song on 1 CD."

"I saw the thread," laughs Flores today, "and right then, I got my phone out, wrote the lyrics, and sent them to Johnny."

Closest correlation local punk has to Fear or the Meatmen, Worm Suicide never lets a good bit of tastelessness go undeveloped. Flores lifted the cudgel: "We used to get drunk as fuck," snarls one verse, "Pre-game 'til time to rage/ Now you wear a fanny pack/ Bring a diaper bag onstage!"

The singer suggested their respective bands write music, and with Worm Suicide and Yikes! both studio bound, he fanned the flames even higher: "Why don't we get 10 bands to do it?!" Posting a Facebook page, Flores cut and pasted the lyrics into the event info and encouraged bands to write their own music. Twenty acts responded.

"And you know how it is," deadpans Flores. "Twenty punk bands agree to do something, 10 are gonna do it."

Zero Percent, Baby Shitters, and Circle Pit all border on grindcore, while B.P.M. and the Inspected perfectly channel 1981. Öldie Häwn commits a note-perfect Ramones homage, and the Butts, Drive the Sky, Skink, and Yikes! offer varying flavors of pop-punk. Stuck on 45 turn in a lo-fi '77, Ministers of Hate go full-on goth/industrial, Brumes inject some Motown, and Sexy Charles could be Killing Joke.

"Pablo sent the lyrics over, and we thought, 'These are some bitter, angry lyrics, man!'" says ConvOi! singer Matt Jones, who called up band bassist/arranger George Schinler. "I said, 'Let's make this tender.'"

"What's really fucked up is I've got four kids, and me and my wife are foster parents, too. I've got two babies in the house right now. With my electric band, my drummer had a baby and it made it a lot harder for him to get out of the house and practice, so I guess my version was aimed at him."

Flores says the initial 100 copies of Babies Ruin Bands are nearly gone, but more are on the way. A sequel, Daddy Killed a Hooker, is online now – same concept, new lyrics, some of the same bands, some new ones.

A version of this article appeared in print on April 5, 2019 with the headline: Diaper Bags Onstage 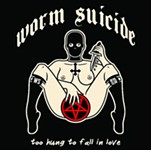 Worm Suicide
Too Hung to Fall in Love (Record Review)