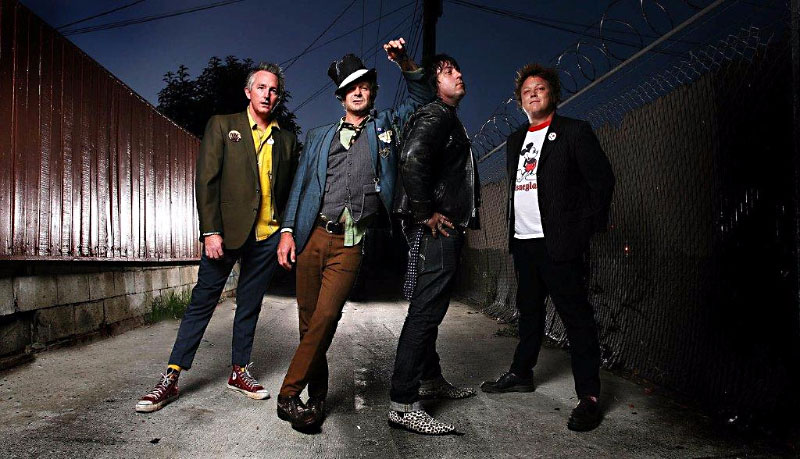 "There was a time when someone would ask you who your favorite band was," recalls singer Mike Lohrman of the Stitches, an Orange County fourpiece preaching the 1977 punk gospel since 1993. "If you said the Sex Pistols? 'Oh, you're a poser!' because you weren't listing some hardcore band of the time."

An Orange County fourpiece preaching the 1977 punk gospel since 1993

When he saw a flier in his now-defunct Underdog Records shop looking for a Pistols/Clash/Black Flag-influenced singer, he auditioned. One year later, when debut 45 "Sixteen" b/w "Something New" exploded via Lohrman's own Vinyl Dog imprint, the group rebranded as the Stitches, with only their original guitarist remaining. Following two more singles, an EP, and an LP, the original axe wielder now gone, the Stitches as we know them solidified into Lohrman, guitarist Johnny Witmer, bassist Pete Archer, and drummer Craig "Skibs" Barker.

The basic sound: pure, adrenalized, Seventies snot-rock. Fusing the power-drive catchiness of the Ramones, the Dead Boys' explosiveness, and low-rent trashiness from Brits like the Lurkers and Eater, they're controlled chaos. Live, Lohrman tangles himself in microphone cables as Witmer hurls his Gibson against the amps.

And that's just the first number.

"I'm used to playing in a tiny rehearsal space with a shit P.A.," says Lohrman. "To hear us mic'd with good equipment takes away the proper piss-and-vinegar from the shit equipment and angry mindsets that made these songs originally."