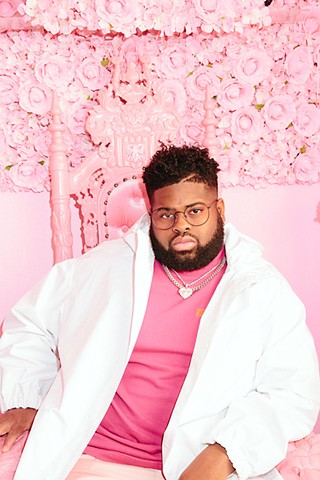 "As a new artist in this climate of music, there are a lot things you're competing with," says Pink Sweat$ by phone from Los Angeles. "But one thing you can't deny is a good voice."

Warm vocals by the Philly native born David Bowden sit front and center on November's debut EP Volume 1. Everything about the project – neon colors, posh videos, fashion swag – screams hip R&B for the SoundCloud era. Well, save for the minimalist backing tracks, which are oft stripped down to a single acoustic guitar. It's all as cozy and inviting as....

"I was living in New York and just wearing pink sweats all the time in the studio, bumming it," he chuckles about the moniker. "I wasn't around one day and someone who didn't know my name was like, 'Yo, where's pink sweats?'"

The fashion choice makes sense for a cat born on Valentine's Day.

"I feel like I give off the energy I want to receive," offers the singer. "I give off a lot of love. It's not about wearing pink, it's about being pink. The world is so dark sometimes; just imagine if people were a little bit kinder to each other, how much further along we would be."

Despite a growing buzz, this is still all very new to Sweat$, who transitioned from songwriter to solo artist less than a year ago. Coming into SXSW, he's performed live exactly twice, but that feeling of stepping onstage for the first time remains something he could get used to.

"It was bliss, man. It was beautiful."