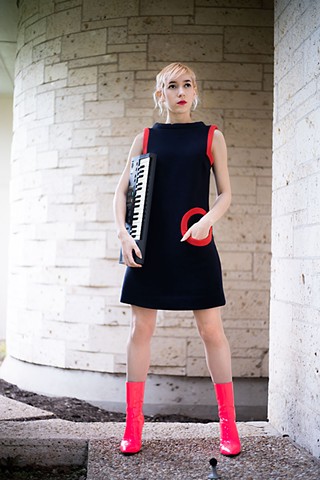 "I've been directing the music videos, and it's becoming part of the vision when I'm writing," she explains. "In my dreams, I would work with dancers, costume designers, and set designers to create a story from the first chord until the last shot."

Rebecca's voice is feathery sweet in English or French, while videos supporting the EP are tender and nostalgic, like her sound: glitter-edged roses in soft auburn hair and a forlorn ballerina in an empty room. The chanteuse cites Ella Fitzgerald and Michel Legrand as influences, but writes brokenhearted disco music with catchy melodies – synthy sweet, orchestral, night-club pop.

"These days, I listen to a lot of Eighties French disco and Japanese pop," she affirms.

"It's been magical. Writing together comes very naturally," she writes. "We have an album coming out on Holodeck very soon this year."