Catching up with the singer, activist, and Against Me! and Devouring Mothers bandleader 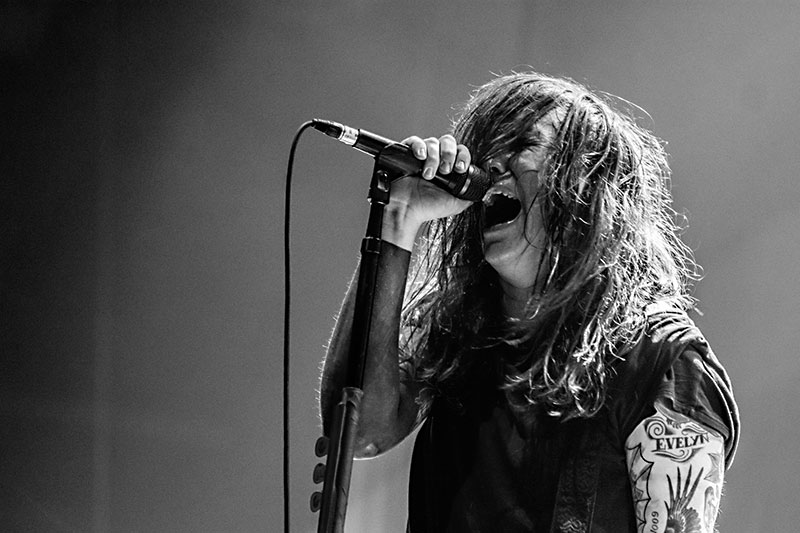 Calling the Chronicle on Valentine's Day, Chicago-based music icon Laura Jane Grace recently emerged from a reflective winter holiday for songwriting sessions with her pioneering punk act, Against Me! The activist/author now kicks off tour dates as Laura Jane Grace & the Devouring Mothers with a SXSW showcase and speaker session. The 2016-assembled side project, which includes Against Me! drummer Atom Willard (formerly of Rocket From the Crypt, Social Distortion, and the Offspring) and bassist Marc Jacob Hudson (Against Me!'s longtime sound engineer), released debut Bought to Rot in November.

Austin Chronicle: You stayed off social media in December. What prompted that?

Laura Jane Grace: Over the winter I was going through some medical stuff. I felt like maybe while I'm going through hospitalization, it wasn't the best time to have my phone in hand. I didn't want to be making 3am, delirious-on-pain-pills tweets or anything. Also, my daughter was on break from school, and my mom got married. I wanted to make a conscious effort to focus on being a parent and getting my personal life in order.

I also feel like, right now, there's a speed change happening. We're all approaching the end of the decade, so you're able to compare: "What was it like around 2009 or 2010?" We're at the turning point in the Trump presidency with the 2020 election picking up. It feels most natural to pause for a second and interpret, "Well, what does this mean? Which direction are the winds blowing now?"

AC: Did doing the Devouring Mothers project bring any freshness to your Against Me! songwriting?

LJG: For sure, and vice versa too. I needed to do that. Now I'm on the other side, and I feel better. I think a lot about the way things have changed [in Against Me!], going from being a band where everyone lived in the same town to being a band where everyone lives in different states. You have to plan your creativity into concentrated bursts, and that changes a lot of stuff.

If [Devouring Mothers] had been something that I wanted to do when [Against Me!] was in our early 20s starting out, it would have been a lot harder for people to grasp, maturity-wise, without feeling threatened. It might have implied something else was up with the band. But being a little older, you're able to see that it wasn't designed like that.

AC: When it's not being dissected by the media, it's normal people would play in different configurations.

LJG: You often have to rationalize and justify your actions when talking to journalists, who are like, "Why'd you do this thing?" That wasn't necessarily at the forefront of my thoughts when I just wrote these songs and said, "Hey, do you guys want to get together and play some music?" Then it's, "Oh shit, I guess it needs a name because it's not Against Me!, so we'll call it Devouring Mothers."

I don't think about why I'm making these decisions, because it's my art. So then having to justify it afterward can sometimes be really stifling. I think the best example of that is your album bio. It's supposed to encapsulate all the reasons you've done something. So many times during my career, the bio doesn't have any fucking thing to do with what we were doing, but there it is.

AC: Did you ever feel your role as a songwriter being outshined by other roles you've taken on?

LJG: I see the way they all interact, for sure. In the last two years in particular, I felt like, "Okay, I just want to focus on music." I'm trying to promote my music, but so much of promotion has nothing to do with the art. It's always some story built around it. I did a lot of really personal interviews that felt like going under psychoanalysis as opposed to talking to journalists.

“Going into transitioning and coming out, I knew that was going to be the focus now.”

Going into transitioning and coming out, I knew that was going to be the focus now. So I was stuck between a rock and a hard place where I'm just trying to meet opportunities that come up, but I can't control the questions that are asked. It's a tough fucking world to navigate. I try to just be honest, but sometimes it feels very invasive. I definitely feel uncomfortable watching some of those [interviews] after the fact.

AC: To focus more on music, did you have to prioritize your responsibilities as an artist over some of the activist work you've been involved with?

LJG: When I was 19 or 20, the way I was an activist was by regularly meeting with groups, going to protests, and being there on the ground. Given whatever number of circumstances, my role as an activist at this point has turned into raising money for the charities and causes I believe in, so that's something that I've never really felt diminished in any way.

When the [Devouring Mothers] record came out in November, I did a number of charity fundraisers, especially around a group I work a lot with, If You Want It. We raffled off test pressings, signed posters, and did a guitar giveaway through Yamaha.

AC: How have you learned to prioritize when you need personal time off?

LJG: It's figuring out the natural rhythms to everything. I had a really busy couple of years and there was a lot of focus put on me coming out and being trans and stuff like that. It felt really needed, but there came a point where I recognized, "Okay, y'all have heard enough about me. You don't need me to talk about this stuff anymore. I'm still a musician. It doesn't have anything to do with these other things."

I felt a lot more at a loss in November on how to handle this stuff. It was an awkward record cycle of like, "I don't know how to talk to the press anymore. I just want to play shows and write songs and make music. That's what feels good."