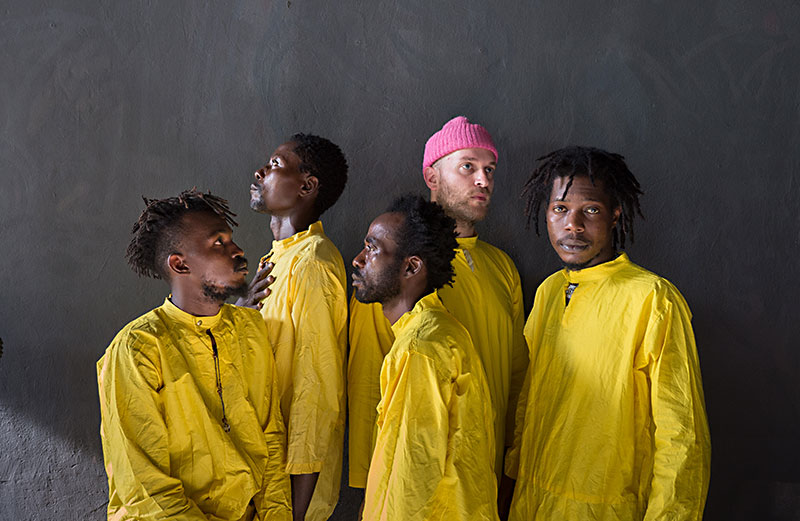 Recently, Makara Bianko stared at the inviting arms of a Swedish audience, utterly perplexed. For the Congolese vocalist and dancer, crowdsurfing remained a completely foreign concept.

The group’s unique Afro-tronic style is borne of instruments made from old typewriters, coffee cans, and oil jugs, all of them crafted to emulate sounds heard in electronic music.

Formed in 2016 and now breaking internationally, Kokoko! represents the mesmerizing street sounds of Kinshasa. The Democratic Republic of Congo's capital, it's a loud, bustling city of about 10 million citizens, largely undiluted by tourism and mass internet connectivity. The group's unique Afro-tronic style is borne of instruments made from old typewriters, coffee cans, and oil jugs, all of them crafted to emulate sounds heard in electronic music.

Beat work from Thomas and the ultra-hype frontmanship of Makara, whose use of language reflects that of Kinshasa – mostly Lingala, with bits of French, Swahili, and Kikongo – complete the sonic collage.

"Most listeners don't know the language, but the energy and musicality translates," affirms Thomas.

The producer says Kokoko!, who look Devo-ish in their yellow hazmat suits, exemplifies a modern variation in Congolese music, which has been long dominated by established artists like Koffi Olomide. In doing so, they've become transcendent beyond the Congolese diaspora, both as a live attraction and through recordings, including last year's Trangressive-issued Liboso EP.

"There's a generation that wants to have their own sound, their own voice, and turn the page on these older guys who control the scene like the Mafia," Thomas explains. "We want also to give a window to Kinshasa and people around the world are coming closer to look in."