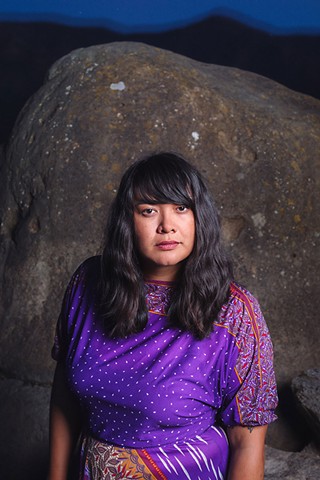 Katherine Paul's debut as Black Belt Eagle Scout yields visceral songwriting, emotional intensity delivered through airy, lovely melodies. Portland-based multi-instrumentalist, she grew up in a Swinomish Indian Tribal Community in Washington state and wrote Mother of My Children while working through heartbreak on every scale, such as dealing with the intimate loss and pain of watching the protests at Standing Rock. The stunning LP received wide release last year after Saddle Creek Records found it and cold-emailed Paul.

“I was raised on a tribal reservation by two very strong Native people, so identity is a huge part of our life,” says Katherine Paul.

"I love being loud with instruments. It's something I'm more comfortable with rather than being loud with my voice," says Paul, who plays every instrument on the album and will perform in a trio configuration at SXSW. "Having different outlets of expressing myself is fulfilling, so I can sing really quietly and then simultaneously a guitar solo comes up and it can be really loud. It's just easier to express myself when I have full control of everything happening in the song."

The singer pushes increased visibility for Native people, and recognizes indie rock as a still predominantly white space. Live, she takes a moment to introduce the quiet, intense "Indians Never Die," which calls out colonizers and demands respect for Earth.

"I was raised on a tribal reservation by two very strong Native people, so identity is a huge part of our life," says Paul. "Playing guitar, playing drums, playing all these instruments; the one thing I find comes out first is music about myself, and music about my feelings. Music about who I am.

"That's the whole point of me doing this."