Nomadic musician tracks where she's been through her songs 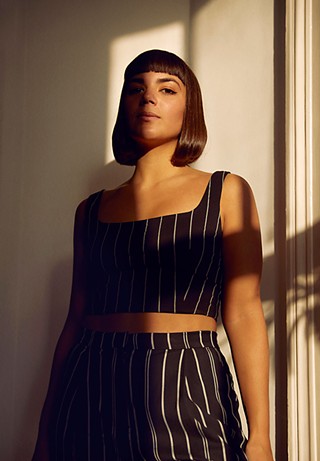 Amanda Lundstedt (aka Ayelle) comes from many different places. Born in Sweden, raised in Spain, and trained in London, the 24-year-old songwriter melts together R&B, electronic music, and Swedish pop on 2018 EP Slow Clap, dedicated to every single woman's foil: the fuckboy.

Born in Sweden, raised in Spain, and trained in London, the 24-year-old songwriter melts together R&B, electronic music, and Swedish pop.

Austin Chronicle: How did your upbringing influence your music?

Ayelle: I'm half Iranian, so I grew up with a lot of Iranian music combined with Swedish music, R&B, and soul. A lot of Destiny's Child and Mariah Carey. There's some Oriental vibes to how I use my voice, and also pop elements from Sweden.

A: The last few years, I'll build the song from scratch with a producer. I studied production at uni, so being familiar with Ableton and Logic, I can communicate what I want to do much clearer. I like being involved in building the sound, but don't necessarily need to sit at a computer to do it.

AC: What’s your next album about?

A: It's about how I'm a bit of a nomad. I wouldn't say I have a home, because I've lived so many different places. I don't end up staying in the same place for longer than a month it seems. The album is a bunch of songs I've written [while] traveling all over.

AC: What else would you like people to know about your music?

A: I just want people to be able to relate. To find some parts of themselves in the lyrics, which are the reason I got into music to begin with. I started putting songs on paper when I was about 6, because that's when I learned to write. Music has always been a way to find out what's going on internally. I want to be able to help people in the way that my music helps me.