After the Bastrop fires, Deezie Brown pursues happiness over Lamborghinis 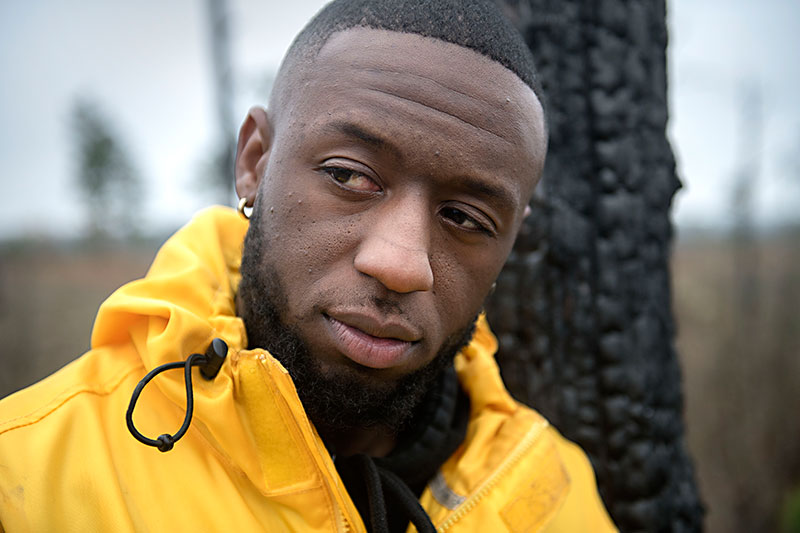 Born and raised in Bastrop, rapper Deezie Brown launched a fleet of winter/summer jams last February on Judith, a reference to the biblical widow who wins over then beheads Holofernes. Riding top down in Lamborghinis across spacious but bleak terrain, the chilly song cycle dotted the charms, pitfalls, and potholes of the mainstream. Seductive tracks like "I Fell in Love in a Two-Seater" and "Sheepskin/Shayne" offer paradise, and perdition, depending on the angle.

"I really wanted to tell a story about the industry and how you can become confused on what they display as success," explains Brown.

The MC freezes sunshine tracks into arctic odysseys like Kid Cudi’s Passion, Pain & Demon Slayin’ while stitching together narratives that evoke a cinematic sense of place akin to Blade Runner or Mandy.

The MC (Devin to his mom) freezes sunshine tracks into arctic odysseys like Kid Cudi's Passion, Pain & Demon Slayin' while stitching together narratives that evoke a cinematic sense of place akin to Blade Runner or Mandy. Rooted in psychological seasons, Judith reflects gains and losses in Brown's own life. After the Bastrop fire torched most of his possessions, from his hard drive down to his shoes, the birth of his daughter inspired him to double-down on hip-hop.

"So now, on this next album, I can do what I want. Now I can make the music that's coming from my soul, from my heart, and from my home," he says.

That album is the more organic, less steely Hydrate, produced by former NBA star Chris Bosh. Even while recording Judith at Spitshine Studios on Burnet Road, Brown prepared for Hydrate by building up his home studio, where he now records on his days off from a six-days-a-week, 10-hours-a-day job as a postal worker. One of the studio's first fruits, a collaborative EP by Brown and Bosh, drops after SXSW.

"I'm not that artist that chases the bling and Lamborghinis," admits the Texan. "That ain't the life for me. I don't want any of this stuff. I'm going to go find happiness. So that's what I'm doing right now."