From the Indigo Girls to a celestial, Cocteau Twins-infused shoegaze comer 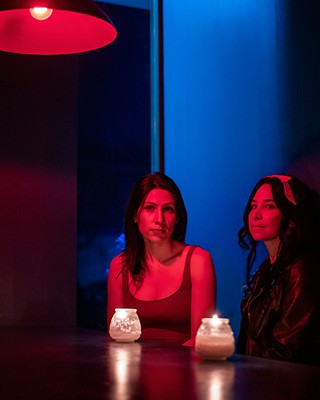 In the beginning, Michelle Soto's melodies were trapped in her head.

"I had no experience with electric instruments," the Blushing guitarist/songwriter explains of her 2015 mindset. "What was so frustrating was that I had these songs I wanted to write, but I had all these barriers to actually make this music: 'I'm not good at guitar, I can't sing.'"

Then, she approached longtime friend and classically trained singer Christina Carmona. Blushing thus began as an acoustic duo, but the early living room sessions yielded more Indigo Girls and less the celestial, Cocteau Twins-infused shoegaze they pummel now. Carmona picked up bass, and in 2016 they added their husbands to the lineup. Jake Soto's years of drumming in hardcore bands and Noe Carmona's expertise on guitar rounded out the quartet's thundering wall of sound.

The band found an early supporter in Cheer Up Charlies booker Trish Connelly, who booked Blushing's first gig in 2017. They quickly became omnipresent locally, churning out two EPs while their debut LP, recorded and produced by Ringo Deathstarr's Elliott Frazier, is due later this year. Blushing's name now appears constantly on Austin bills, their live sets an intensified version of the studio work.

"I grew up playing the piano and violin," says Carmona. "When I plugged the bass into the amp, I was like, 'Whoa, this is so much power!' We wanted to play into that."

Blushing's tactile sound blossoms from a juxtaposition of gutsiness: Carmona's break from the rigidity of classical training and Soto's innate composing from an untrained background. The former admires the latter's intuitive approach.

"When you don't have a whole lot of knowledge in a subject, you're not afraid to make mistakes," Carmona says. "You don't know what the mistakes are, so you don't limit yourself."