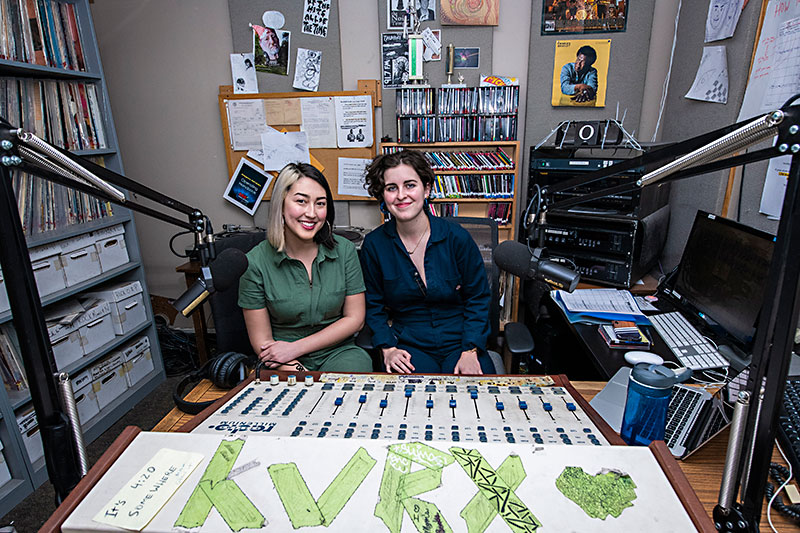 Gab Soong recalls attending her first meeting for KVRX 91.7FM. She asked if the UT radio station put on a festival. Aside from increasingly big South by Southwest events and in-studio sessions, the left-of-the-dial connoisseurs did not. On May 10-11, now-station manager Soong brings her vision to life as KVRX Fest, endeavored with her colleague and booking director Elise Barbin.

Forty bands for $40 split between Cheer Up Charlies and Symphony Square, trailblazing indie usage of the latter's Waller Creek-side amphitheatre. Relying on sponsorships without university financing, the two deejays are debuting the nation's largest music festival solely organized by a student-run radio station. Barbin designed the event as a genuinely genre-spanning assemblage.

"It goes back to KVRX's core ethics of diversity, and making something because it doesn't exist," she says. "We were looking at much smaller artists to headline, and then realized we could go bigger while staying true to our values."

"'Would I feel okay telling freshmen girls to go here?' Because I wish I had someone looking out for me when I was that age," she ventures.

Those goals were tested when original venue Spider House pulled out in early December amid back-and-forth with the planners over issues with co-owner John Dorgan's alleged misconduct. The UT seniors behind the talent procurement also faced pushback from local industry during the planning process.

"One venue told us, 'I don't know how you think you have the resources to pull off an event like this,'" recalls Soong. "All of the problems we encountered are really illustrative of why we needed to do it in the first place."

Luckily, the venue limbo led to a partnership with local event producers Ritual Events, touting past work with Desert Daze and Fun Fun Fun Fest. Led by Max Gregor, the company provides needed logistical aid for KVRX Fest, whose collegiate runners aren't allowed to process funds under Texas Student Media guidelines. There's also some synergistic magic in the lineup's alignment with what one could imagine as a teeny sliver of Sound on Sound Fest if it still existed. Ritual Events previously put on events as Sound on Sound Event Services.

"We wanted it to be joyful," she smiles. "There should be a lot of dancing and uplifting."

Over 100 smartphones pickpocketed at the first weekend of ACL Fest 2018 are finally making their way back to their local owners. The Austin Police Department and homegrown Zilker Park convergence are teaming up to return the stolen goods via the website Crowdfind.

Last October, a package shipped from Austin to Kissimmee, Fla., through UPS was flagged as suspicious. Sgt. Grattan Heyward of the Osceola County Sheriff's Department says the cache of recent phone models inside "still had pictures of people's dogs and kids on the screens." Most were set to airplane mode with SIM cards removed. The department contacted a few owners, all of which attended the fall annual's first weekend.

Victims confirmed, UPS notified Wilmer Arias-Arias his package had arrived to an illegally registered P.O. box in Kissimmee. Heyward and an FBI agent staked out the store. "[Arias-Arias] showed up doing laps around the parking lot three times, which was suspicious, like countersurveillance," details Heyward.

Police arrested Arias-Arias in the store, along with Edward Javier Garcia-Castano and Estivenson Blanco-Rubiano. Federal authorities then charged the trio for trafficking in stolen property across state lines. All three were later deported to Colombia for immigration offenses.

Heyward searched one of the pickpocket's phones to discover photos of the individual at Coachella and some 20 other music festivals.

"They were having a grand old time partying all over," he says. "It was clear: This is what they do for a living. We turned evidence over to the FBI."

APD Sgt. Noel Guerin confirms that around 25 devices have been returned to their owners, making this the department's largest item reunification effort ever. Many victims reported being bumped into in packed crowd areas.

"Anytime you have 100,000 people in a small geographic area, there's going to be thefts," says Guerin, who works security at ACL. "But to know the phones were taken from Austin and potentially shipped overseas was a big eye-opener."

The City Buck & the Country Buck

After a couple years of intensive touring with Big Thief, Texas native Buck Meek recently settled into the canyons of Topanga in Southern California. "It feels pretty vulnerable to even have an apartment," acknowledges the artist. "Taking my socks out of my suitcase felt strange, but it's important to have somewhere to return to and close the door, even if it's just for one day."

Meek's new home base remains the largest wilderness area within a city limit in the country. That connects with the singer's upbringing just outside of Wimberley. His dad frequently drove the family to Austin for strummers like Ray Wylie Hubbard and Erik Hokkanen, which Meek says "changed his subconscious" for later learning guitar.

Calling in from solo dates with Twain, Meek opens for Jeff Tweedy on a sold-out Austin stop March 4 at the Paramount Theatre. The distinctive guitarist returns for SXSW, including the Tejas Sessions at Batch (March 16) and Chilled Phases in Dripping Springs (March 17). It's a welcome step-off from "surrendering" to his band's major takeoff following Big Thief's 2016 Masterpiece.

"It was a sacrifice," says Meek, "but we all felt we were making something to heal people and heal ourselves too, on a deeper level. The rest of our lives blurred into the background."

"I see fear in that photograph, but also the fox's fascination," explains the performer. "The wild animal versus the potential domestication reminded me of the song 'Best Friend' on my record, which is about a dog that runs away from home to go back to nature." Fred Armisen called Tim Kerr onstage for an acoustic rendition of "Sound on Sound" during a sold-out set last Friday at Empire Control Room. The visual artist/guitarist of pioneering local punk act Big Boys wrote on Instagram: "Fred's in town. It's hard for people now to realize how close knit/community we all were (the bands and scene) back in the Eighties. Everybody stayed at each other's houses, put shows on, etc. It's still happening, you just have to dig a little deeper."

A Texas Music Economic Impact Study, released Feb. 21, reports the statewide music industry generated 2,000 new permanent jobs and an additional $390 million in tax revenue in 2018. In a press release, the governor acknowledged, "Music is a big part of 'Brand Texas' and serves as a competitive advantage," adding that the industry supports "continuing business recruitment and expansion efforts."