Evan Charles and Sean Faires brave the myth of the Southwest 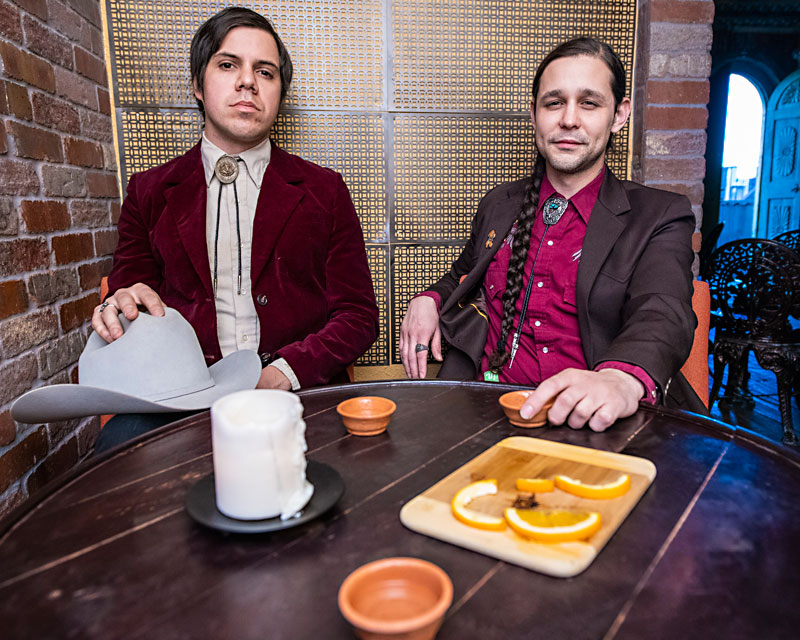 Sometimes all it takes is a single song. With 2016 single "The Long Ride Home," Altamesa soundtracked the view out of a car window on the way home from a road trip. You know the feeling: caught in the afterglow of experiences that rearrange your DNA, wondering if your old life will even recognize you.

The ensuing full-length of the same title, patient, deep-thinking Americana that earned a four-star rave in the Chronicle, served as a troubadour turn for then-26-year-old Evan Charles, who formerly fronted pure, homegrown rock & roll acts the Sweet Nuthin and the Daze. Producer Jonas Wilson, keen on the Austin native's distinct voice and poetic lyrics, all but dragged Charles into the studio to document a subdued DIY vision on the order of Leonard Cohen's Songs From a Room.

Second LP Idol Frontier, arriving Friday, expands on the Altamesa sound. Imagine Bruce Springsteen's desolate cult classic Nebraska sung by a godforsaken Tom Petty with Keith Richards on guitar. No longer looking out the window, Idol Frontier gets out of the van, digs deep in the soil, shares a smoke with dusty locals, and casually dusts off the zeitgeist of life in the American Southwest.

Sean Faires isn't just elemental to the sound of Idol Frontier. The guitarist proved indispensable to the group's growing aesthetic. And not only has he championed Altamesa as a conceptual force of territorial storytelling, he painted the visual art that accompanies it.

Charles and Faires first crossed paths at the Hole in the Wall in 2012. The former revered the latter's band, muscular R&B rockers the Happen-Ins. Meanwhile, the future Altamesan didn't know the frontman's Sweet Nuthin from any other outfit making noise at the Guadalupe dive.

"Oh, these young kids are gonna cover the Rolling Stones' live masterpiece? The one they're the number one killers at?" Faires retorts, still giving Charles shit seven years later.

The full-time addition of Faires was transformative for Altamesa. The two musicians completed each other.

Charles is modest, thoughtfully quiet, and an impressionistic writer whose pen drips with chilling abstractions. Faires, outspoken and ambitious, thinks thematically in big-picture terms while dotting the desert sky with starry six-string riffs. Together, Altamesa became an epic reflection of the soil they inhabit and the spirits that sprout from it.

"We wanted to create something that people can sink their hooks into."

So explains Charles of Altamesa releasing six singles in 2018, each loaded with customized art and serialized short stories, at special events. "We thought we could accomplish that by lending more context to the music and sell home the record's overarching narrative."

The urge to wander plays heavily in the multivolume narrative, which follows The Drifter, a transient musician and son of an oil rigger, whose restless soul rolls at the speed of the rural South­west in navigating love, family, purpose, and a sense of time and place. Composed of long sentences that run like unpaved back roads, Charles' free-verse vignettes awe with elaborate language ("I am an anachronism"), easy wit ("It's always been all or nothin', mostly nothin'"), and crafty, nonlinear structures that trace his fictive protagonist from Midland to El Paso. Highways stretch on forever through a life that's long and hard, yet full of momentary magic: the electricity of romance and the fulfillment of playing to the one quiet loner in a bar of drunks.

The series, and the Wilson-produced album that now follows, speaks of salvation; an existential study of our daily walk on a path that's no Yellow Brick Road. Without asking, Idol Frontier raises big questions about what we strive for and how we reach it.

"The important thing is never to stop, no matter how long you have to stare down what by all appearances looks like the cold abyss of failure – the eternal and irreversible loss of the object of your striving," writes a Drifter-like Charles in the notes to one of the singles.

"Kids are into that Joshua Tree, desert spirits vibe," asserts Faires. "We want to provide some meat to that: a story that's an actual reflection on the Southwest."

"That record puts you directly in the Deep South," Faires nods. "You can feel it, smell it, taste it."

The narrative's final chapter closes with gamblers' lore and the biblical tale of Jacob, who put in seven years of physical labor to earn a woman's hand in marriage only to then get bait-and-switched for her sister. Charles attributes the fatalistic ending to his preoccupation with French philosopher Albert Camus, particularly his suicide-questioning The Myth of Sisyphus.

"After all the layers of meaning that you've tried to impose on your life – and none of them amounted to anything – what are you left with? You're pretty much left with your day," Charles outlines. "Then you wake up the next day."

Altamesa releases Idol Frontier on Friday, Feb. 8, at Cheer Up Charlies with Will Courtney & the Wild Bunch, Chief White Lightning, and the Ghost Wolves.

A version of this article appeared in print on February 8, 2019 with the headline: The Myth of the Southwest