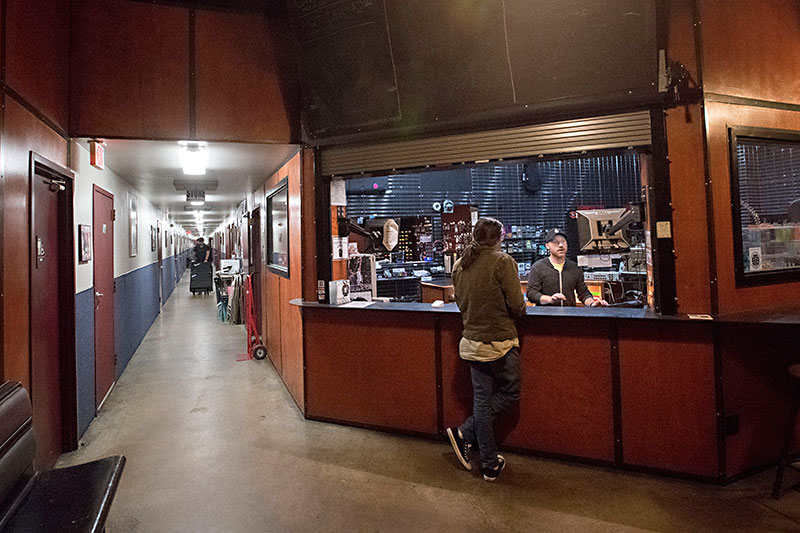 Check-in at the Oltorf location of Music Lab, now up for sale (Photo by John Anderson)

Music Lab's Oltorf location, a default rehearsal space for Austin musicians, is up for sale. In an exclusive email statement to the Chronicle, president Dan Cabela and secretary Joe Cabela explained the listing on commercial real estate site LoopNet as "an attempt to understand whether consolidation is a good move for us." Such a plan would move all business to their second location on St. Elmo Road, part of mixed-use development The Yard.

Other attempts to "improve efficiencies" include reduced hours and sale of the equipment rental department to newly founded ATX Backline. Both rehearsal hubs also include a retail store for music gear and a cafe. Music Lab first launched at a now-shuttered original space in 1992, and the Oltorf locale opened six years later.

"No decision has been determined," asserted the Cabelas. "We do not know all the answers [or] what the future holds. We are doing what we can to streamline and continue to provide a great creative atmosphere for our Austin musicians."

Both Music Lab locations offer hourly rehearsal room rentals alongside month-to-month room leases, historically a hot commodity passed down among musicians. Local artist Mandy Rowden previously operated her music lesson company, Girl Guitar, out of three leased rooms at the Oltorf location. Talk of a shutdown pushed her to downsize to a single lease and discontinue her business' work with other instructors.

"Selfishly, I hope it all blows over, but realistically [Music Lab] can't last forever," shares Rowden. "When that does happen, me and my students will find just one place. We'll cross that bridge when we come to it."

Music Lab increased prices last year, forcing electro-pop group Shy Beast to look elsewhere after practicing at the Oltorf location for four years. The Cabelas state their business model cannot survive Austin's soaring real estate prices "without increasing rent revenues." The executives also address "a ceiling on what the average working musician can afford to pay in rehearsal rents along with all the other expenses they have. We may be at that ceiling."

Zeke Jarmon, singer of local alt-folk group Batty Jr., celebrated his 10th birthday with a costume party at Music Lab Oltorf. He remembers enjoying pizza rolls at Michele Murphy's now-defunct Natural Ear Music School, also held at the space. Today, the 28-year-old rents a room there when it's too late to practice at a bandmate's house.

"Every time I go, I try and measure how fat I'm getting," remarks Jarmon, explaining his creative use of the building as a lifelong growth chart. "There's two doors to each room. If you can close both of them and fit in between, then maybe you should eat more pizza rolls."

Jarmon and Nelson Valente Aguilar of synth-cumbia quartet Como Las Movies have each played informal shows at the rehearsal hub throughout their careers. The former says Music Lab provided an important DIY venue during his underage years. Additionally, the locale provides a frequent setting for band origin stories, South by Southwest celebrity sightings, and late-night musicmaking thanks to a 3am closing time.

Warning of a possible shutter hasn't been delivered to renters through any official channels. Aguilar hadn't heard the news, and says he'll have to "do some homework" concerning a backup pre-show rehearsal space. Rowden, who grew her business in the space, tears up talking about the Oltorf building.

"When I think back on my 20s and 30s, I see myself at Music Lab," she says. "I picture it more than my home. Austin's changing so much that we're all learning how to say goodbye, but it will be a big, big [loss] if it goes away." 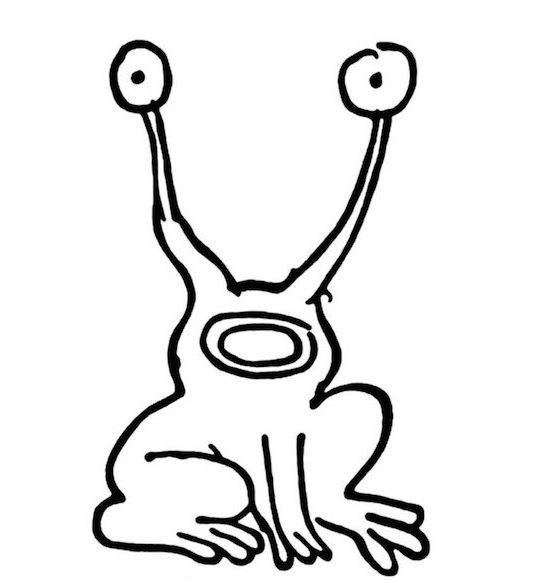 "We got letters and support from around the world," recalls Gimbel, Johnston's longtime manager. "So, we doubled down and realized, 'This is something special, and something needed.'"

"You're shaken to the core," remarks the Oklahoma City icon. "When making music, part of you wants to be a childlike character that isn't thinking about, 'Is this cool?' or 'Is this going to work?' With [Johnston], there's elements of being pure, emotional, and real that are just uncanny."

Coyne endeavored Johnston track "Go" with Sparklehorse for the 2004 Discovered Covered tribute album. Like Flaming Lips riffs on John Lennon, he says there's something in Johnston's pop songs you can't quite grasp.

"It's not something you can learn to do," muses Coyne. "Maybe it's not even something that he can do – something that happens when he's about to die and then he makes music instead of killing himself. I don't know. It's some sort of cathartic magic." 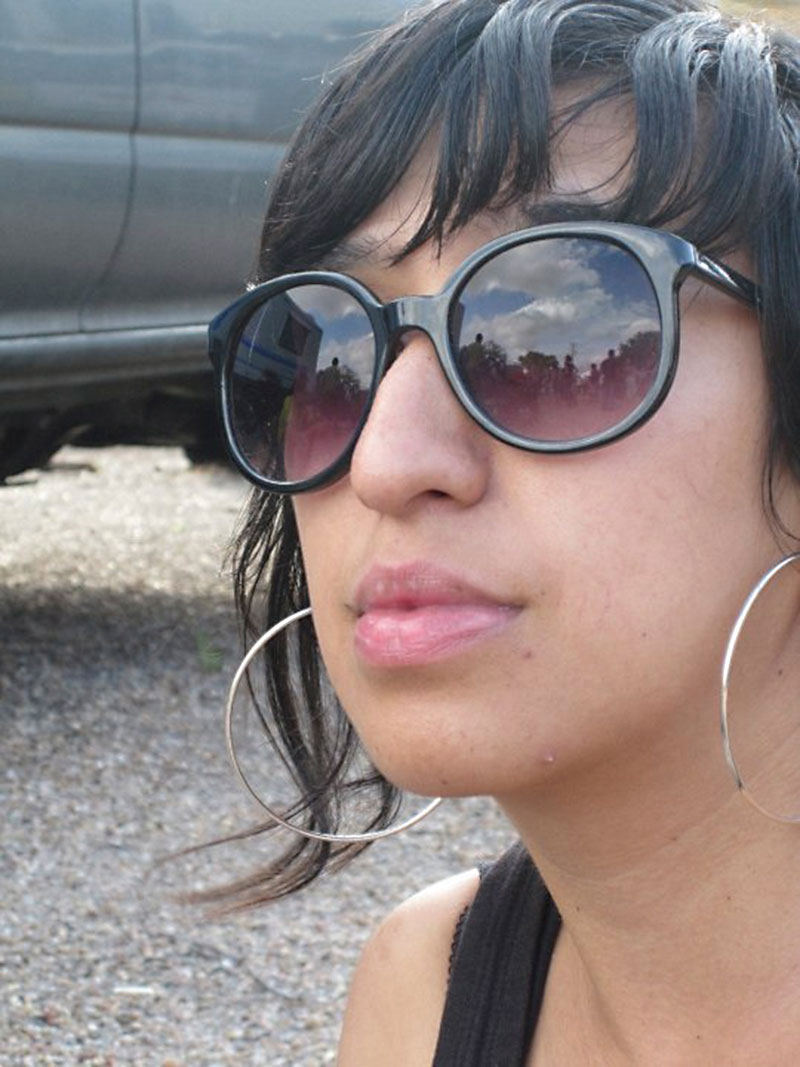 In high school, Esme Barrera and Greg Gonzalez made mixtapes. Topics included songs that made you dance, ones that made you cry, and what to play at your funeral.

"Me and Esme, it was all about music," says Gonzalez. "We used to call each other and she'd be like, 'Oh, check out this song,' and put the phone up to the speaker. I found out about so many great records through her."

Barrera is remembered as a fervent music fan and immutably positive, community-building force. When she was murdered locally in 2012, her death shook the Austin music scene. Gonzalez, head of Brooklyn dream-pop act Cigarettes After Sex, knew precisely what to cover at her closing mass: "Waterloo Sunset" by the Kinks. Some of Barrera's favorite artists pay tribute Friday at the Mohawk for "7 Minutes in Heaven: A Celebration of Esme Barrera," including Gonzalez performing solo, punk pioneer Ted Leo, and Jim Ward of Sparta and At the Drive-In (see also Live Music Listings).

The show raises money for the first-ever Girls Rock summer camp in Barrera's native El Paso, adding to a GoFundMe started by her sister. In addition to her work as a special needs teaching assistant and Waterloo Records clerk,Barrera volunteered at the weeklong camp for girls, nonbinary, and trans youth. Former Girls Rock Austin directors Erica Flores and Jess Boettger planned a pilot program to be sustained by members of the El Paso community, with funds supporting scholarships for 25 campers this summer.

"You have kids at the beginning who will barely whisper, and by the end of the week they're playing a solo in front of 300 people," says Flores of her Girls Rock experience. "It extends beyond music. It's a sense of self-efficacy and importance. Esme used to tell the campers that they were full of unlimited possibilities."