Wasn't That a Time: the Weavers, the Blacklist, and the Battle for the Soul of America

Once, folk singers faced jail time and worse for their political affiliations 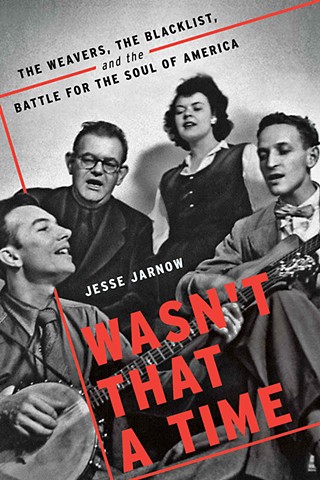 As cries of "witch hunt" resound from the despot inhabiting 1600 Pennsylvania Ave., Wasn't That a Time documents a folk group caught in the crosshairs of the Fifties' so-called Red Scare, wherein entertainers were dragged in front of the House Un-American Activities Committee and asked, "Are you now, or have you ever been, a member of the Communist Party?"

Delivering both a history of America's second-wave folk music boom and recounting the perilous stakes and paranoia surrounding McCarthyism, Brooklyn musician and author of 2012's Big Day Coming: Yo La Tengo and the Rise of Indie Rock Jesse Jarnow triumphs in detailing the trials of four magically compatible singers whose socialist connections and anti-authoritarian ideologies got them professionally blacklisted at the height of their fame, 1952-55. Pre-Bob Dylan, the Weavers brought folk and world sing-alongs to a mainstream audience by virtue of their bloodhound sense for song collecting and a knack for transforming underground sounds. In the New Yorkers' crystal harmonies, Lead Belly's troubled love account "Goodnight, Irene" and Solomon Linda's Zulu chant "Wimoweh" (née "Mbube") became commercially appealing hits.

Jarnow employs deep sourcing to convey the complex personalities, histories, and ideologies of Pete Seeger, Ronnie Gilbert, Fred Hellerman, and Lee Hays. Their early People's Songs efforts recall a time when folk singing functioned politically. Alas, the Weavers' path from picket lines and NYC hootenannies to nightclubs, tuxedos, and lyrics altered for mass consumption leaves the reader to decide if they were seminal sellouts or progressives Trojan-horsing the Popular Front into pop music.

In either consideration, Wasn't That a Time effectively and subtly contextualizes how the "If I Had a Hammer" singers overcame, though not unscathed, intense political repression from the Peekskill riots to Pete Seeger's HUAC stand, where the banjoist refused to denounce his performing for communist causes: "I have sung in hobo jungles and I have sung for the Rockefellers and I am proud I have never refused to sing for anybody!"

Imagine someone saying something that honest and inspiring in a modern government investigation.

Wasn’t That a Time: the Weavers, the Blacklist, and the Battle for the Soul of America