Been So Long: My Life and Music 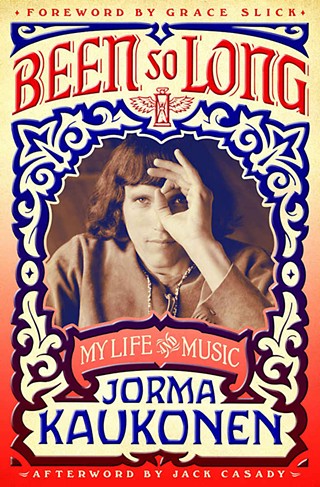 If you're looking for a behind-the-scenes exposé into Jefferson Airplane, this isn't it.

True, Jorma Kaukonen helped found this seminal San Francisco psych band, but you're better served reading Jeff Tamarkin's definitive history Got a Revolution. Indeed, the heady days of Sixties mind expansion remain but a sliver in a career that spans 60 years and continues to this day. That's not to say the guitarist ignores the era. He began on the ground floor as a Bay Area folkie who, along with Paul Kantner, Jerry Garcia, and Janis Joplin, drank the Kool-Aid, plugged in, and altered popular music. Hot Tuna, his rootsy folk and blues side project with Airplane bassist Jack Casady, also survives almost 50 years on. What you get here is a very personal and honest insight into a life spent making music, traveling the globe, first with his diplomatic family, then as a musical lifer. There are the requisite battles with substance abuse, enduring dysfunctional relationships, the forging of musical kinships, and ultimately a clear-eyed perspective of what's important in life. Jorma Kaukonen is one of the lucky ones still around to recount this pivotal chapter of the 20th century.

Been So Long: My Life and Music