The Art Ensemble of Chicago and Associated Ensembles

The Art Ensemble of Chicago and Associated Ensembles (ECM) 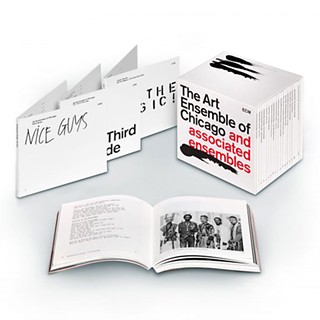 A late-Sixties outgrowth of the Windy City's Association for the Advancement of Creative Musicians, the Art Ensemble of Chicago evolved out of multi-reedist/composer Roscoe Mitchell's groups, with the goal of expanding the black music experience beyond what was then considered the "confines" of jazz.

Releasing its first album in 1969, the AEC erected a tent over traditional African music, spirituals, blues, swing, bebop, post-bop, free jazz, and a music that existed only in their imaginations. Leavening its lofty ideals with a sense of whimsy that kept the music fun, the classic lineup of Mitchell, woodwinds master Joseph Jarman, late trumpeter Lester Bowie, late bassist Malachi Favors Maghostut, and drummer Famoudou Don Moye set a pattern of traversing the history of 20th century improvised music with every record. By the time the group signed to renowned German label ECM in 1978, it had become one of the most ambitious, imaginative, and important ensembles in jazz, embodying its self-created motto: ancient to the future.

Celebrating the 50th anniversary of both the AEC's first album and the foundation of ECM itself, this massive box set encompasses all the work these musicians created for the label. Covering 18 mostly out-of-print albums on 21 CDs ranging from 1978 to 2017, the project includes not only the group's five LPs for the imprint, but also every release in which an AEC member played a significant role: four apiece from Mitchell and Bowie, three that include Bowie or Mitchell from AACM associate Jack DeJohnette, one that prominently features Mitchell from British saxophonist Evan Parker, and one that includes Bowie from AEC fellow traveler Wadada Leo Smith. Like the mothership, these albums embrace both chaos and order, from the melodic accessibility of Bowie's Brass Fantasy recordings to the forbidding experimentation of Mitchell's Bells for the South Side.

Illuminated by a 300-page booklet that includes rare photos, personal essays, and the original liner notes from every album, The Art Ensemble of Chicago and Associated Ensembles excavates a staggering amount of magnificence.