Playback: And the Armadillos Went Wild "I been gettin' hugged raw," reveals Eddie Wilson. "It's been asshole-to-bellybutton in here all day and everybody wants to come up and hump my leg."

Days before Threadgill's World Headquarters permanently shuttered last Sunday, the joint packed out with lunchers consuming chicken-fried pork chops and vegetable plates. The restaurant and music venue's owner, who previously oversaw the three-ring circus known as the Armadillo World Headquarters, sat at table one having his lunch interrupted by a relentless stream of well-wishers.

Our waitress topped off the coffee and glanced toward Wilson: "He's kinda like Santa Claus, isn't he?"

Instead of reading Christmas lists, the procession asked for photos with Wilson, had him sign copies of his memoir, reminisced about old times, and uttered a common phrase: "Thank you for everything you've done."

The 75-year-old deflected the gratitude and nostalgia with gallows humor: "I've been trying to lose enough weight that I can hide under the bed and cry." Later, he admitted, "I doubt the pope ever feels as good as I did yesterday."

Meanwhile, Wilson implored supporters to visit him at the business' original location on North Lamar, which will remain open. The closing of the Austin landmark due to untenable rent increases signals the end of Wilson's south-of-the-river occupation that started when he opened the 'Dillo in 1970, just a couple hundred feet from where Threadgill's sat for 22 years. For regulars, it proved the perfect continuation of Armadillo culture.

In January 2015, Wilson put hundreds of beer signs, concert posters, paintings, and Armadillo artifacts up for auction. That resulted in a crowded and entertaining sell-off that saw several items, including a Jim Franklin painting of guitarist Freddie King and the concert hall's piano, net over $20,000. Why another auction so soon?

"I don't have any place for all this shit – and I'm done with it," he says, surveying the decor covering the restaurant's walls.

The public auction, this Saturday at 10am, will see a few hundred items sold right off the walls of Threadgill's. Dozens of sought-after concert posters and paintings by the famed Armadillo Art Squad, including Franklin, Micael Priest, Guy Juke, Danny Garrett, and Sam Yates, will attract bidders far and wide. The auction also represents a rare opportunity to procure framed black-and-white photographs from Burton Wilson, the Armadillo's in-house photographer. There'll also be old neon signs for sale, as well as memorabilia edifying proto-'Dillo patron saints Kenneth Threadgill and Janis Joplin.

The Armadillo's final show on New Year's Eve 1980 raged until 4am with Commander Cody and Asleep at the Wheel. Thirty-eight years later, the last night at Threadgill's ended promptly at 10pm. Much of the same crowd attended both events, but getting to bed at a reasonable hour is now a priority.

A family reunion of the aging more-Austin-than-Austin counterculture crowd, you couldn't light up a joint without attracting a gaggle of ex-hippies who'd promptly tell you about their exploits at the 'Dillo. Even the youthful minority quickly revealed they were raised on Threadgill's meatloaf. Dare you to find better company anywhere.

Even after the last chord rang out, the audience continued to sing the eternal refrain: "I wanna go home with the armadillos."

More Than a Bankroll

On Friday, musician patronage nonprofit Black Fret awards a quarter-million dollars to bands at their annual Black Fret Ball. Based on voting from the group's membership, 10 acts will receive $20,000 grants and the remaining 10 will receive $5,000. Nominees include A Giant Dog, Tomar & the FCs, Israel Nash, Jaimee Harris, Wood & Wire, Kalu & the Electric Joint, and Los Coast.

By night's end, the total amount of money Black Fret's bestowed to musicians in five years will eclipse $1 million. That's in addition to nearly $300,000 they've paid artists to play parties for their constituents, whose annual membership fees fund the grants. Still, both nominees and organizers will tell you the Black Fret experience isn't all about money.

"The first thing that happened after I got nominated was people coming to the shows that I didn't know. I found they were Black Fret members and even Black Fret crew people," explains singer-songwriter and lap steel specialist Jeff Plankenhorn. "The second thing was learning how invaluable their advisory board could be for me. I'd done the brilliant thing of starting a solo career at age 42 and my previous manager, [South by Southwest co-founder] Louis Meyers, died a week before my last record came out. Through conversations with Black Fret advisers, I found key members of my team."

"What really means a lot is giving musicians the feeling of being valued," he reveals. "We want to put them on a pedestal and we want them to feel like rock stars. That's the part of Black Fret I want to amp up even more."

Part of that effort is putting them on big stages. Black Fret has secured three dates in 2019 to showcase their artists at large public concerts outside the Long Center. Meanwhile, the Black Fret Ball now moves from the Paramount Theatre to ACL Live at the Moody Theater to accommodate a growing guest list, which includes over 300 musicians who've received past grants.

"We're proud that we've built this community and needed the space for them all to come celebrate," says Ott.

Glorietta, the Matthew Logan Vasquez-led supergroup blurring the lines between party and band, releases a three-song EP, Más Glorietta, Friday on local imprint Nine Mile. That day, they'll be featured on NPR's World Cafe. Catch them before the burn-up on Wednesday in-store for Waterloo Records and next Friday at the Scoot Inn.

Friends, family, and fans of Seth Gibbs celebrate the late songwriter and producer's life and music Dec. 14 at Barracuda. A genuine and generous musical soul best known for his work in Bobby Jealousy, Gibbs passed early last month from a sudden, savage case of cancer.

Housing Opportunities for Musicians and Entertainers is a nonprofit making sure aging artists, like 89-year-old soul/blues firecracker Miss Lavelle White, have respectable living conditions. H.O.M.E. is this year's charity beneficiary of Wild Bill's Honky Tonk Holidaze, the Christmas musical about a recently divorced Santa Claus being framed for murder in Texas. The hilarious play runs Dec. 16-17 at Sam's Town Point, with Julie Nolan opening night one and Uranium Savages night two. Tickets, $18, are available at www.brownpapertickets.com/event/3892880. 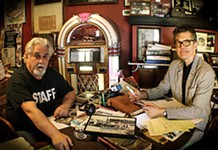