Joe Strummer voiced arguably the most beloved of original English punk bands, the Clash. He also counted himself an urban bohemian and electric folkie, a one-man R&B and rockabilly preservation society, not to mention a fervent socialist and devotee of human potential. A journeyman explorer of world music/culture, few exuded more passion than the Englishman born as John Graham Mellor (1952-2002).

Every dimension of this first-wave DIY icon is cataloged across either four LPs or a pair of CDs. Of 32 total tracks, 12 arrive previously unheard. There's little punk here, since demos for Cut the Crap-era highlights "This Is England" (here, titled "Czechoslovak Song/Where Is England" in a reggae-ish early take) and "Pouring Rain" barely qualify as the Clash to most surviving die-hards. There's also an unreleased 1986 track co-written by Clash songwriting partner Mick Jones: "U.S. North."

Otherwise, sample and/or revisit the blitzkrieg roots rock of his first band, the 101'ers; the world music fusion of his final band, the Mescaleros; the Johnny Cash duet of Bob Marley's "Redemption Song," one of Strummer's final recordings; and some of the blues and country pastiches pseudonymously written for Alex Cox's Sid and Nancy soundtrack. Most interesting is the unreleased track "London Is Burning," a Mescaleros attempt at chronicling a UK – through pronounced Clashness – that eerily resembles 2018 America. 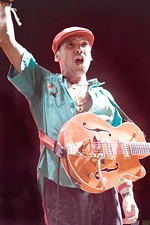 King of Bongo
In search of Manu Chao