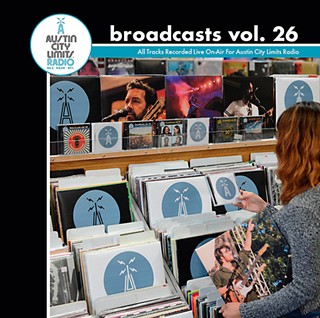 Alongside a 2-CD, 37-track digital version culled from the past year of in-house performances, local manufacturers Gold Rush Vinyl pressed up a double-vinyl set with 20 of the selections. To start, Australian pop takeoff Vance Joy offers a sweet ukulele rendition of "Saturday Sun." Turns out the acoustic savant joins a slew of revisits from last year's edition, which accounts for one-third of the lineup.

Returning Americana stars Elle King and ZZ Ward deliver searing blues-rock in weathered country tones that reiterate both women's earthy appeal. On the other hand, it's confounding that L.A hipster Børns is included again given that ACL Fest cut him from this year's weekend two at Zilker Park in response to allegations of his sexual misconduct. The slick, stomp-fueled sounds of Portugal the Man, Wombats, and Cold War Kids otherwise uphold early 2000s alternative indie on the first disc.

Familiar faces temper the station's promise of increased breath, but the eclecticism of Broadcasts remains.