The trials and tribulations of Mr. Lewis & the Funeral 5, plus a Utopia Fest report, and the passing of Seth Gibbs 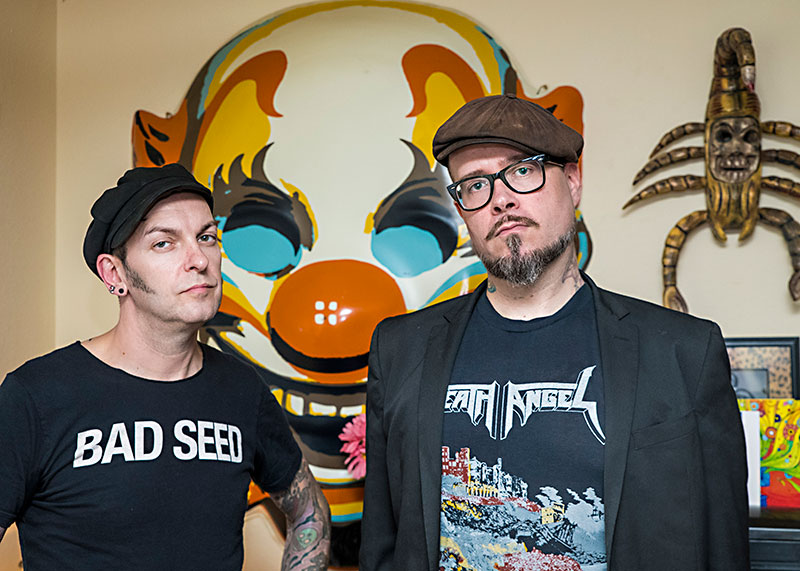 When Iggy Pop performed on Sixth Street during South by Southwest 1996, he ran to a nearby payphone, dialed Lewis long-distance, and held the phone in the air. That was all his buddy needed to hear. In 2004, they formed Mr. Lewis & the Funeral 5, a smartly dressed unit whose heavy waltzes and morbid poetry demanded its own genre: "Macabaret."

Since then, the group – anchored by Sheeran on drums and Lewis on vocals and guitar – has issued a pair of critically lauded LPs: 2007's Murder and the Art of the Dance and 2011's Delirium Tremendous. Sheeran and Lewis' habits epitomize 30 years of friendship. They interrupt each other, laugh knowingly at the onset of an old story, and occasionally get into fisticuffs over things like dirty socks.

"Actually, that fight was about respect," Lewis laughingly clarifies over pints and shots at Gourmands.

Friends are there to help us through the darkness. Last March, Lewis' longtime girlfriend, Lindsey Voss, took her own life while the two were estranged. At the time, Sheeran's wife, Flametrick Subs drummer Kerri Luker, was battling colon cancer. She passed away that August.

"We'd both lost the closest person in our life," Sheeran recalls. "We were vulnerable, but there was strength in being together in the process."

At Luker's wake, two of the widowed duo's local colleagues, Chicken Ranch Records president Mike Dickinson and A-list producer Danny Reisch, prompted their brokenhearted friends to get back in the studio.

"The hand they'd been collectively dealt was so hard and we saw they needed an outlet," says Reisch, who previously produced Delirium Tremendous. "What better outlet than making a record?"

Reisch says the band's first album in six years came together fast. He wanted it to sound raw and real, like the battle scars of life.

"If there was a spot in the song where you could hear Greg starting to tear up, we had to leave it," Reisch reports. "We're all in music because we're trying to feel something. These guys were pouring out their hearts and souls into something extremely potent."

The resulting album, Before the World Beat You Down, now available on vinyl and coffin-shaped thumb drives, manifests strong themes of death and mad love. In the melodically soaring bereavement "See You Soon," Lewis sings, "Save a seat for me, 'cuz I'm on my way." Probable single "Daniel Died," a bouncy baritone sax dirge reminiscent of Morphine, details persevering through loss.

"The girls were on our minds during these recordings," affirms Lewis. "I had Lindsey's dog in my arms while doing vocals."

The 10-track LP, also featuring production from Justin Douglas, showcases Mr. Lewis & the Funeral 5's extraordinary ability to pair playful music with dark lyrics. Sounding like a malcontent poet being tossed out of the bar, Lewis attains some Burt Bacharach with "Bricks" – except those ain't raindrops falling on his head.

"You can see more sorrow and hope looking up from the gutter at the worst time of your life," Lewis muses. "Nobody wants to hear songs about how you picked up the girls at soccer practice on time. It's all about adversity."

Mr. Lewis & the Funeral 5 play Saturday at Barracuda with Nakia and Broken Gold.

Following Patty Griffin's moving Friday night performance, Sutherland delivered a telethon-like speech, thanking production staff for generously working under their normal pay grade and imploring attendees to help Utopia's financial solvency by buying merchandise, beer, and tickets for next year – Nov. 14-17, 2019, at Reveille Peak Ranch. All of which is to say, Utopia's secured a new home.

Uprooting after nine years in Uvalde County, Sutherland initially scouted property in Burnet County, but after an intense battle with neighbors and a split with new partners, the event relocated to nearby Reveille Peak Ranch. That sweet plot, where campers pitched tents by the waterside, proved an idyllic environment for a party that's family-friendly, freak-friendly, and just plain friendly. Musically, the model remained: two stages, no overlap, plus extracurricular unplugged performances for night owls and early risers.

Attendance clocked average for Utopia, but short of the growth expected with a considerably higher talent budget. Livetronica stars Sound Tribe Sector 9 held the weekend's largest crowd on Saturday before a rainstorm blew through and temporarily sent all but the die-hards running for cover. A spirited set from Lukas Nelson, who pre-gamed with a mushroom chocolate, marked a weekend highlight, as did dance/pop horn-blowers Rubblebucket and John Medeski's new B3-skronking Mad Skillet ensemble.

In the context of UtopiaFest, Sutherland's a remarkable booker. Few other local talent buyers would think to book 15-piece swamp funk supergroup the Big Ol' Nasty Getdown or a rarified reunion from Grace Rowland's local pre-Deer trio, the Blue Hit, but Utopians went gaga for both. Ultimately, in a year of uncomfortable flux, Utopia delivered on its calling card: magic moments.

The Austin Public Library has $10,000 for local musicians. They're building a streaming catalog of Central Texas music, so 50 albums are being chosen to stream from their database – accessible anywhere online – with each artist receiving $200 for a three-year nonexclusive contract. Media Selector Dale Kittendorf says they received 21 submissions on Thursday when the program began. Artists can submit up to three songs via the Electric Lady Bird website before Nov. 30, after which material will be selected by a panel of music industry judges. Kittendorf plans to repeat the process every six months.

"Seth Gibbs! Seth Gibbs!" chanted a crowd at Hotel Vegas last Thursday as the Reputations played a superb set to christen the release of sophomore LP Electric Power. It proved a bittersweet moment as Gibbs, the group's founding member and brother to drummer Jimmy Wildcat, had been moved into hospice earlier that day following a sudden downturn in health (revisit "Seth Gibbs Promises to Fight," Oct. 26). The following night, he died at Christopher House at age 36. The singer, songwriter, and multi-instrumentalist, whose epic catalog – including Bobby Jealousy and Brother Machine – bristled with melodic brilliance and complex feelings, had only been diagnosed with stomach cancer two months prior.

Sonny James, the colorful singer and guitarist who fronted Thee Unseen Eye and also owned Sonny's Vintage on the Drag, passed away unexpectedly from a stroke on Oct. 27. A Houston cat who hung his hat in Amsterdam for a spell, James played loud, lowdown blues in his act Sonny & the Sinners, in addition to performing with old-school figures including Little Joe Washington and Joe "Guitar" Hughes. Settling locally, James opened his vintage store in the late 2000s next to Continental Liquor and featured a stage for concerts both planned and impromptu. In recent years, James played alongside Eve Monsees, Mike Buck, and Gil T. Isais as Thee Unseen Eye, an amped-up R&B act that hinged on Sonny's aura: loud, expressive, and funny, with style to burn. 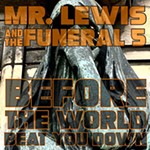 Mr. Lewis & the Funeral 5
Before the World Beat You Down (Record Review)