As ACL’s second weekend dawns, here are the most unforgettable moments from week one There's seldom a plot twist at the second week of ACL Fest, so if you're hoping to be surprised about what eternal sing-along Paul McCartney chooses as an encore, or how apeshit the crowd goes when Brockhampton takes the stage, stop reading now. Otherwise, here are the most unforgettable moments of last weekend's throwdown in Zilker Park.

She should have been Sunday's headliner. The 5-foot-tall Atlanta android delivered a stadium-worthy performance, complete with copious wardrobe changes that included undulating vagina pants. At her career peak, Monáe is Madonna and Prince – with fewer hits and better dance moves. "Break the rules. We make the rules. We make this world a better fucking place," she declared before "Electric Lady" and "PrimeTime," a defining moment of female power and sexual equality commencing with the message: "Love is love."

All of Austin Hears Metallica

McCartney had a bigger crowd, but ACL's first and last thrash headliner was heard by more people. On Saturday night, a friend in the distant Lost Creek area texted "Playback" to say he could clearly hear Metallica, who augmented ACL's speakers with their own audio gear. The foursome's riffage also traveled to far Northwest Austin, according to residents on the Nextdoor app. Hopefully they all enjoyed an immaculate version of "Master of Puppets," which highlighted a powerful set only marred by James Hetfield's corny banter: "I smell barbecueeeeee!"

Friday's gathering for Paul McCartney rivaled the Eagles' 2010 appearance as ACL's largest audience ever, and everyone had a view of the Beatles bassist's boyish mug thanks to the 80-foot video screens he brought. Wings staple "Live and Let Die" featured two fireworks shows, but set closing sing-along "Hey Jude," in which 100,000 arms waved in unison, made for the weekend's ultimate moment.

To the pounding cut "New Orleans," the monumentally popular group, formed in San Marcos three years back, emerged one by one. With each entrance and subsequent verse – first Dom McLennon, then Kevin Abstract, Bearface, Matt Champion, and Joba, all in custom Dickies coveralls – the youthful crowd screamed louder. When UT dropout Merlyn Wood emerged last, the frenzied throng went straight-up hysterical. Once they lined up across the stage, singing, dancing, and rapping to an audience that shrieked at every turn, "Playback" came around to the fact that Brockhampton is, in fact, a boy band – especially considering Joba's frosted bowl cut à la a 1995 issue of Tiger Beat.

Throwback rock isn't dead. Greta Van Fleet amassed a larger crowd than "Playback" had ever seen in ACL's corner stage – bigger than Kendrick Lamar in 2013 or Tame Impala two years later. I can see why: They do a great impression of a band. Smoking the resin of early-Seventies rock to the extent that their matching, faux-Indian fringe vests don't feel out of place, the Michigan foursome wowed rock traditionalists with guitar-behind-head solos and a polarizing singer that either sounds like a young Robert Plant or a threatened chimpanzee. All music is derivative, but GVF feels put on.

Conversely, Australia's Gang of Youths, who seem to have adapted Bruce Springsteen's "Dancing in the Dark" into a band, were better than expected. Singer David Le'aupepe's a cheesy hunk: strutting, pounding his heart, shaking his ass, blowing kisses, and doing jazz hands, but he's also got attitude. "The whole world thinks your president is an asshole, have some courage and stand up," he told the crowd Friday. "I heard Austin is one of those places that does."

Travis Scott's live show consists of him performing truncated versions of his songs with turned-up energy. He's got the popularity to be a solid ACL Fest headliner, but not the grandiosity to appeal to anyone who isn't already hot on his intense and vibey trap hits. The pit proved a superfun hurricane of teens wylin' out for Snapchat stories from the second Scott started (10 minutes late) to his last beat (10 minutes early). At one point, the Houston rapper/singer pulled up an eager young fan, who flexed for the crowd, and took Scott's mic to absolutely murder "Goosebumps." Thanks to Scott's copiously Auto-Tuned mix, the kid made it look easy.

Chicago poet Noname is one of the realest voices in rap. That means broaching unexpected topics. For the 27-year-old Fatimah Warner, whose 2016 breakout Telefone was rated PG, that topic is fucking. On new track "Self" she rapped, "My pussy wrote a thesis on colonialism." Friday's impressive set also debuted the highly sexual "Window," which she prefaced with: "I had sex for the first time and realized I love sucking dick! I'm gonna write an album about a lot of stuff ... but mostly sucking dick."

On Saturday, the Senate voted to approve a Supreme Court nominee who outright lied to the Judiciary Committee when he claimed "boofing" meant flatulence. Actually, it means ingesting drugs or alcohol through your anus. Hours later, Dallas native Annie Clark commented on politicians approving a man accused of sexual assault: "It just reminds me that no matter how much insane shit is going on outside of here, this moment is ours. There's a reason to dance."

Lil Wayne's fifth installment of Tha Carter series now sits atop America's albums chart – great timing for ACL's last-minute replacement for the injured Childish Gambino. The stream-count-enhancing 23-track effort is a solid, but woefully overloaded effort that neither diminishes nor achieves the Louisiana wordsmith's 2008 peak. Via his collaborations with younger artists, including Travis Scott, you get the notion he may have been influential as a proto-mumble rapper. Expect his 7pm Saturday slot at the fest's hard-to-access HomeAway stage to cause a MoPac-level traffic jam of humans in the middle of Zilker.

The Texas Flag features a blue rectangle with a "lone" white star that covers the whole left side. Someone please explain that to Sir Paul McCartney, who waved a Chilean flag during his encore last Friday.

Elle King flashed a single breast during her performance of "It Girl," one of several striking new songs that ramped anticipation for October's Shake the Spirit.

Call off the Dogs! Multiple artists reported to "Playback" that their vans were stopped and searched by bomb-sniffing canines.

"I Grew Up playing in this park," Shakey Graves told the enormous audience that gathered for his Sunday performance, which included a cover of Nirvana's "Something in the Way." "Freeze tag, not music," he clarified. "But if y'all want to play freeze tag later, we could get a sweet game going with this many people."

Beto shirts are the most popular fashion trend at ACL Fest 2018. Anywhere you stood, a "Beto for Senate" tee was in view. Asleep at the Wheel's Ray Benson even exchanged his cowboy hat for a Beto ball cap. Meanwhile, the only Ted Cruz shirt "Playback" spotted read "Ted Cruz is the Zodiac Killer." 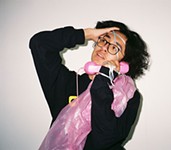 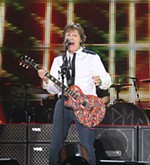 Pick a Headliner: Paul McCartney vs. Metallica
We break down each act's stats so you can make an informed decision