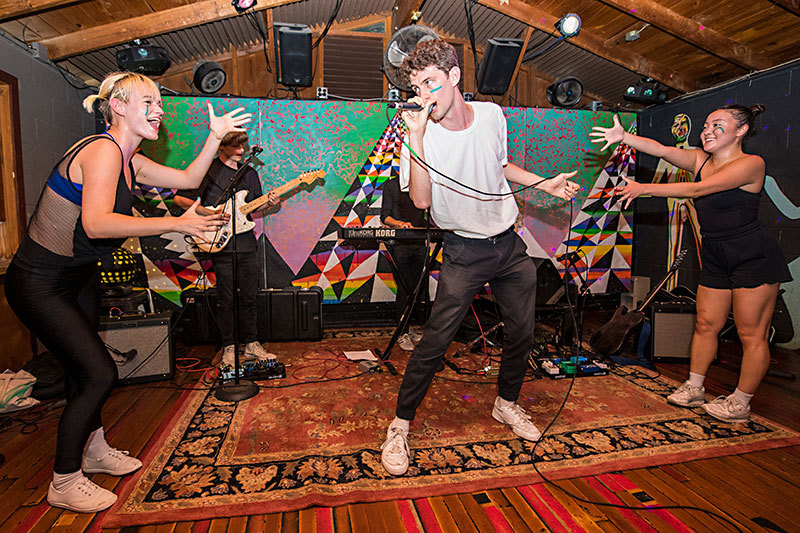 TC Superstar's sophomore release, April's Heat Death, finds singer Connor McCampbell imagining an environmental apocalypse that wipes out civilization. It's a concept LP about humans coming to terms with death on a global scale. As such, the tracklist's framed by the five stages of grief: "Denial," "Bargaining," "Anger," "Depression," and "Acceptance."

"It's a violent album in some regards," admits the 23-year-old frontman, whose calming voice and detailed lyrics slide over sparse synthwave backing. "I pretty much die at the end of every song."

Astonishingly, this is excellent music to dance to.

Body movement exists at the forefront of TC Superstar's highly conceptualized performance aesthetic, in which female dancers execute strictly choreographed routines to each song. It's a unique take on contemporary dance that embodies the grace of fine arts, while also maintaining the free-spirited energy you might witness at 1:59am at Barbarella.

"Part of our goal was to get people excited about moving their bodies and experiencing something more than watching a band and bobbing your head," says LB Flett, the group's founding choreographer and dancer.

"Have you ever been to a baseball game and see the one kid they catch on camera dancing in the stands?" he asks. "That's me compared to them."

As part of Flett's vision to "make dance more accessible, not only in performance, but also education," she and DiFranco are hosting two master class dance sessions on Sunday. Participants who sign up via Facebook learn dance techniques using TC Superstar's choreography. The way in which those ultra-expressive dance routines combine with dark-themed pop music has a strange synergy.

For example, the group's 2017 anthem "Toyota Corolla" tells the story of a meek office subordinate who transforms into a badass when he cuts his boss off in traffic, but then later kills himself in his garage.

"I really like writing songs that people can dance to, feel cathartic, and have a good time on a Friday night, but listen to the rest of the week and get something else out of it," says Houston-raised McCampbell.

That juxtaposition of content and presentation is akin to dancing at a funeral – a concept that gives McCampbell pause.

"Yeah, no one dances at funerals," he contemplates. "But you could. It's a valid way to express yourself."

Blissed Out in the Park

Laraaji's a fascinating artist. And not only for his life story: a Philly native who moved to New York City to pursue comedy, fell into Eastern Mysticism in the early Seventies, started making meditative music on an electrified zither, became well-known for his associations with Brian Eno, and now leads popular laughter workshops. Septuagenarian Edward Larry Gordon is also intriguing as a major figure in New Age music, a punchline genre for which white noise loops chart on Billboard.

More of a blissful meditation than traditional concert, the quintet's hourlong performance closed eyes, invoked deep breathing, and elicited broad smiles. In an unplanned collaboration, bass reverberated from the trunks of old Crown Vics and Oldsmobiles in the adjoining parking lot. The pulsating beats were easily mistaken for sub-bass patches of Dallas Acid's Moog arsenal and the musicians embraced it, vibrations from Austin's urban core blending with those of New Age ambience for a magical East Austin moment.

Worshippers of blast beats and blasphemy descend on Austin this weekend for a two-day black metal ritual. Austin musician Shane Davis of Black Vice and Ravnblod started Red River Family Festival, named after his cassette label, in 2016 with modest ambitions. Each year, he's seen more tickets being purchased from faraway states and foreign locales, demonstrating that his tastes resonate with other serious black metal aficionados.

"I try to home in on unique acts," Davis explains. "Booking bands that people thought they were never going to experience live draws the underground market."

Here's a primer to the black metal binge, running Friday and Saturday at Barracuda:

Panzerfaust
Ontario black metal quartet, whose vocalist roars from a candlelit altar, notorious for pissing on the Westboro Baptist Church.

Crawl
Sludge metal one-man band who drums while growling into a microphone bone mask and striking a bass made from a cow spine.

Double Trouble (in the Streets) 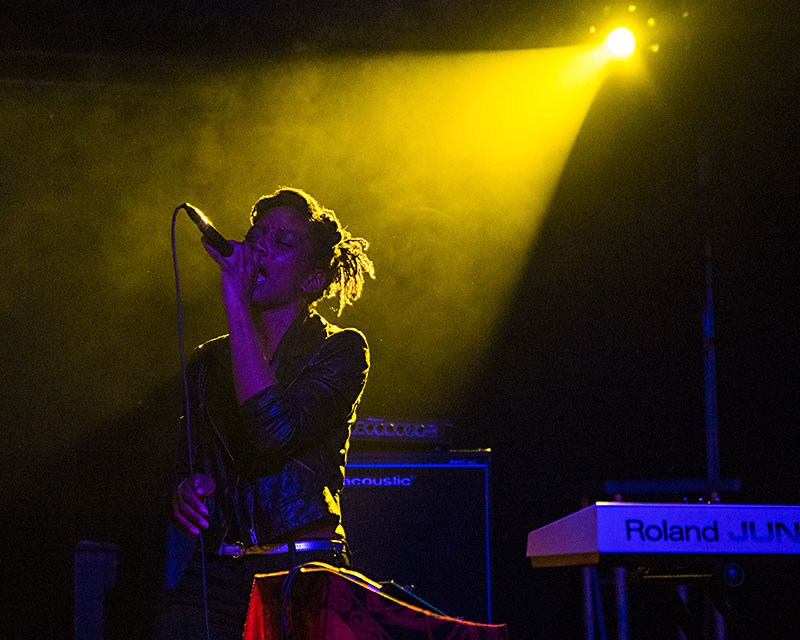 Trouble in the Streets (Photo by David Brendan Hall)

Trouble in the Streets, whose swift local ascent got confirmed by a Best New Band victory in last year's Austin Music Awards and a booking at November's Utopia Fest, releases its sophomore EP Saturday with a concert at the North Door. Compared to the 2016 mission statement Electro Tribe, the four-track Rule Breaker contains increasingly subtle touches of EDM impulses and, thus, a more nuanced musical universe. Nnedi Agbaroji sounds like Jamila Woods on the splashy, futuristic R&B title track, before commanding the mic with attitude-driven raps over Andy Leonard and Robert Slangen's hard-hitting livetronica backing on "Chasing Whatever" and "Mad Science." Agbaroji, who's been selected to rep Austin at forthcoming international festivals as part of Project ATX6, also shows off her agile singing with a cover of "Pure Imagination," the song from Willy Wonka & the Chocolate Factory. 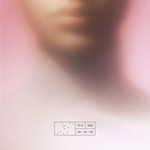