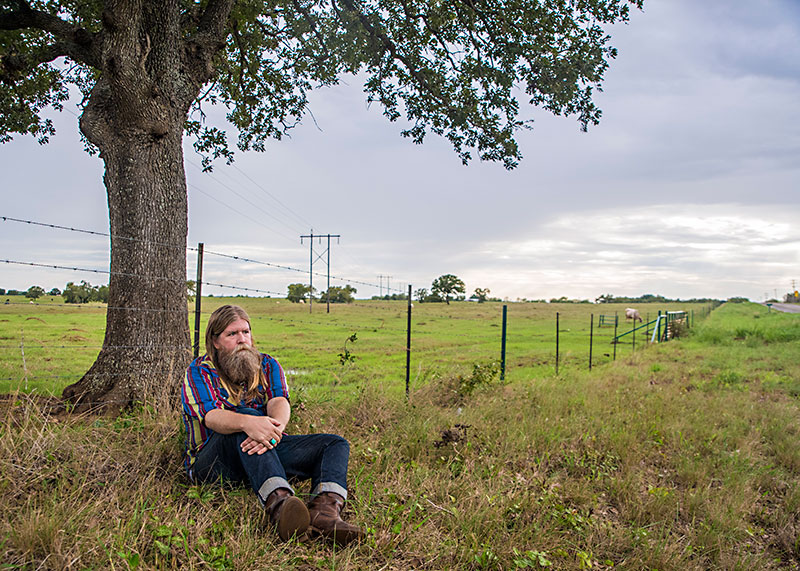 The danger of interviewing someone like Will Courtney is veering wildly off topic down conversational rabbit holes about keystone albums, vintage gear, or the state of music in general. The former Brothers & Sisters frontman holds forth on Neil Young and Neumann microphones with the same heartfelt stridency that fuels songs like "The Days When Bands Could Make You Cry" from 2016's Planning Escapes. He's a music fan's musician.

Once upon a time, Courtney would have been the kind of developing artist a young Lenny Waronker might sign to a three-album deal at Warner/Reprise in the golden age of major labels. You can imagine him blending in at the Laurel Canyon Country Store or Doug Weston's Troubadour in the early Seventies. In today's contracted landscape, Courtney figured the best way to make his third solo album an exclamatory statement was to record at home and control every aspect of production.

"Every record I've ever made has been done in a few days because I just didn't have the money," Courtney says. "So I'd go into studios and just have to practice real hard and we'd play it. That's cool, but I always wanted to make bigger records that I could take my time with."

Courtney's road to self-production began while fiddling around with a four-track recorder as a teen. He paid attention to engineers when he was in the studio. He watched YouTube videos about drum mic placement and devoured books like Kevin Ryan and Brian Kehew's Recording the Beatles. He traded instruments for recording gear.

Then Courtney found a West Austin duplex for rent. The owner was a banjo-picking massage therapist who only used the other duplex during business hours. A 300-watt Ampeg bass amp soon took up residence in the bathroom.

"There was a little stage in the bedroom," Courtney says. "That's the reason I rented it. We put the drums on the stage so it had better sound."

Released this week, Crazy Love testifies to Courtney's triple threat as a performer, songwriter, and producer. Nary a hint of superfluity blurs the emotion and economy of its 11 songs. From the lonesome Western scorch of "Too High Now" to the heartfelt resolution of "Partner in Time," the rough-hewn album follows a love-lost-and-found narrative arc that proved wholly unplanned.

"It wasn't intentional when I made it, but I realized it became kind of a concept," allows Courtney. "A love album, which I did not expect."

After Brothers & Sisters stopped playing in 2010 (a reissue of 2008's Fortunately is forthcoming), Courtney left Austin and became something of a musical vagabond. Brief stints in a disparate string of locales followed, including Los Angeles, Nashville, and Santa Fe. He and his wife returned to the Austin area in late 2015. They now call Lockhart home.

"My mom and dad were artists," Courtney relates (revisit "Will Courtney: Simple Man," July 5, 2007). "They moved around as they got inspired. I just kind of saw that as the way to go. I think it's a good thing."

It's no accident Courtney's 2013 solo debut is titled A Century Behind. His songs often focus on a sense of longing for another place or time. Crazy Love's "Loaded" meditates on honky-tonk obliteration, while "Take You Away" punctuates the urge for escaping the high mundane with a blistering guitar solo.

“I think I’ve always been stuck in the past,” Courtney nods.

"I think I've always been stuck in the past," Courtney nods. "Even when I was a kid, I liked my parents' records. I have just always liked older music and older movies. I mean, I'm obsessed with Billy the Kid. That's another century!"

"It's so straight ahead and such a big love ballad," Courtney observes. "I was never going to record it. I just wanted somebody else to do it. I found somebody who knew people in Nashville and tried to get it pitched to some artists out there."

Although performed with ragged intent by Courtney and his well-oiled backing band, the Wild Bunch, "Finally" could easily be rerouted in a more mainstream direction.

"I tried to put as much edge to it as I could, because to me, it sounds like a late-Eighties Don Henley song or something," Courtney says.

When I mention it also brings to mind Tom Petty, Courtney – ever the music fan's musician – points out that guitarist Mike Campbell played with both Petty and Henley.

Courtney's own Mike Campbell is Daniel Wilcox, who has played with him since the Brothers & Sisters days. Bassist David Morgan, another B&S alum, played on Crazy Love but left to make way for Amplified Heat's Gian Ortiz in August. Drummer Travis Garaffa ('Til We're Blue or Destroy) and guitarist Mike Molnar (Bellfuries) round out the current Wild Bunch iteration.

For Wilcox, who splits time between the Wild Bunch and the Ugly Beats, servicing the songs means not overplaying. He notes with soft-spoken pride that Courtney's never told him not to play something.

"Will's got great melodic sense," Wilcox says. "It's obvious in his melodies and the lyrics he's singing, and also in his arrangements for songs."

The gift of time that came with home recording helped make Crazy Love more of a band effort. Wilcox recalls having a week to learn the songs from Planning Escapes before entering the studio still reliant on chord charts. By the time recording for Crazy Love commenced in 2017, the Wild Bunch were musically bonded through local gigs and a mini Midwestern tour opening for Lydia Loveless.

"There's nothing that will replace getting in a room on a regular basis and hashing out the songs," asserts Garaffa.

Ultimately, the hashing out is where Crazy Love finds its center. More than once, Courtney mentions his key goal as a songwriter is to tell the truth. Those truths can only be amplified when his songs are performed as earnestly and enthusiastically as they were in the bedroom of that rented West Austin duplex.

"The joy that I have in band practice," Courtney says, "that's the feeling I want always in music."

Will Courtney guests during Wil Cope’s Tuesday night residency at the Hole in the Wall on Sept. 25, to unite the two Williams in the Wil Cope & Will Courtney Show, 8pm.

A version of this article appeared in print on September 21, 2018 with the headline: Finally