Scratch Acid and the Jesus Lizard in their new roles, plus a Twin Peaks themed concert

As a murderous meth head in I Don't Feel at Home in This World Anymore, David Yow found a new way to terrorize audiences.

Lead villain status ain't nothin' new for the noise rock marauder who spent the Eighties and Nineties crawling atop crowds as the frontman for Scratch Acid and the Jesus Lizard. Now a forthcoming wave of significant film roles raises the question: Is David Yow an actor or a musician?

"I've never considered myself a musician," Yow rebuts. "I can't play an instrument, I don't know music theory, and I can't sing my way out of a wet paper bag."

Lack of technical skills notwithstanding, the former Austinite forged a potent and notorious music career with unhinged poetry and scrotum-exposing, beer-can-throwing stage antics that twice landed him in court. No surprise, the 58-year-old now gets cast as a degenerate.

"I love it!" he exclaims. "It's sort of typecasting, but I'm not too far from a degenerate. I'm a very nice guy, but certainly perverted and sick.

After a lifetime of "half-assed" acting ambitions, the L.A.-based Yow is now bona fide with a manager and agent. He's got the face of a character actor, but says he'd "love to play everything from Peter Pan to Bad Lieutenant and everything in between."

"Acting turns me on and I'd like to try a whole bunch of things," he says. "If I'm bad at it, I hope someone will tell me to stop."

Presently, his IMDb page is growing. He's got a "small, but pivotal role" in Under the Silver Lake, David Robert Mitchell's much anticipated follow-up to horror hit It Follows, arriving Dec. 7. High and Outside: A Baseball Noir, now making rounds at film fests, finds the screamer portraying a caretaker for an elderly baseball legend, played by the late actor Geoffrey Lewis.

For Yow, who leads a reunited Jesus Lizard into ACL Live at the Moody Theater on Saturday (see also "Live Music Listings"), the distinction between music and film is the challenge of being directed. In the climax of I Don't Feel at Home in this World Anymore, which has been a popular Netflix flick since landing on the platform last year, a snake latches onto his face while he stalks Melanie Lynskey though a pond. His instincts said scream, but Austin-based writer/director Macon Blair suggested he throw his arms aloft and squeal – a memorable cinematic moment.

"I'm proud of David, he was so good in that movie," says Brett Bradford, Yow's bandmate 1982-87 in Austin berserkers Scratch Acid. "I will say one thing as a wildlife biologist though, if a venomous snake bites you, it's not going to hang on as you're running through the woods. That really bothered me."

While being a biologist, conservationist, avid sportsman, and TV extra – look for him flanking Pierce Brosnan on horseback in the new season of AMC's The Son – Bradford remains one of Austin's most unique underground guitar heroes. Since Scratch Acid's conclusion, he's continued to employ his iconoclastic Stratocaster playing, a flurry of open strings and brilliantly dissonant notes, in a lineage of stellar Austin heavies like Sangre de Toro, Areola 51, and Insect Sex Act.

"Ever since I went into that place, I thought, 'I hope someday I get to play here,'" he reveals. "I guess playing in Scratch Acid finally paid off."

Music in the Key of Twin Peaks

Laura Palmer died at the hands of her father, who was possessed by a demon named Bob. There, I just ruined Twin Peaks for you.

Then again, even this spoiler won't quell the eternal fascination with David Lynch's early-Nineties cult TV series. That obsession yields a truly impressive event at Cheer Up Charlies on Friday: The Damn Fine Music Fest.

Don't expect Angelo Badalamenti covers. This is deeper than that. Five brand-new bands will play music inspired by characters from the strangest murder mystery to ever grace network television.

Behind conceptualization by Jeffrey Brown of Dallas' King Camel Productions, Cheer Up Charlies' booker Trish Connelly handled the miraculous feat of finding 22 brave local musicians, plus five visual artists, willing to be teamed up and assigned a Twin Peaks character for whom to create 25 minutes of original music.

"David Lynch created a world that was quirky and surreal. Then he left a lot of questions unanswered, so it's left a lot for people to discuss and dig into."

Encore Records closes on Sunday. The longstanding record shop is selling off a discounted stock of CDs, vinyl, shirts, and DVDs, so load up before they lock up. Owner Chuck Lokey invites friends to stop by Saturday evening for a low-key farewell hang.

Sabrina Ellis of A Giant Dog and Sweet Spirit has teamed up with soul pop showstopper Har Mar Superstar for a new project called Heart Bones. Both agile vocalists excel at stage pizzazz, so Ellis and Superstar are truly cut from the same cloth – probably lycra with sequins on it. Heart Bones hits the road in November, performing the Dirty Dancing soundtrack plus newly recorded originals. Ellis tells "Playback" an Austin date is imminent.

Summer Salt got dropped from Epitaph Records after multiple women came forth with allegations of sexual assault and rape against now-former bassist Phil Baier and sexual misconduct from guitarist/vocalist Matt Terry. Seven total allegations portrayed a band that viewed its female fanbase as sexual opportunity. After another apology statement reading like it was crafted by a sensitivity counselor, the remaining members are on hiatus and donating all album profits to an undisclosed sexual assault charity.

Short of Popular, the 1996 post-breakup collection of odds-and-ends from noise punk weirdos Cherubs, debuts on vinyl via Sonic Surgery Records on Oct. 12. The record, originally issued by Butthole Surfers drummer King Coffey's Trance Syndicate, finds the now-resurrected Austin trio at their rawest and most freewheeling, including wailing joyride "Carjack Fairy" and a gnashing cover of Blondie's "Dreaming." 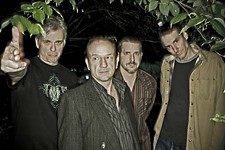 The Jesus Lizard
All hail the second coming 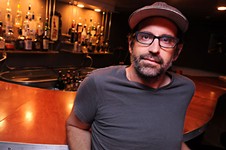 Off the Record
Electric Lounge's second act on the Eastside, catching up with Scratch Acid and Austin's other 'Voice' contestants