In studio with Confucius and Fresh, hosts of KUTX’s first ever hip-hop specialty show 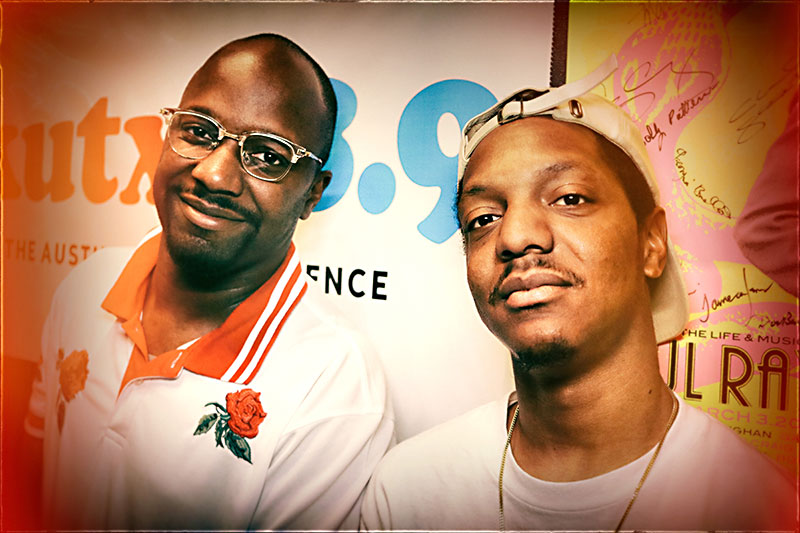 "Rappers are the new rock stars," declared Fresh on 98.9FM during last Saturday's installment of The Breaks.

That night's guest, Austin rapper Teeta, who looked every bit the part in dark sunglasses with a mouthful of gold teeth (see this week's cover), shrugged.

"I feel like we always were," said the MC.

"If it wasn't for hip-hop right now, there wouldn't be no music industry."

Emphasizing hip-hop being the music of today is how Confucius and Fresh got their own show on KUTX. Station Manager Matt Reilly remembers their pitch: "You're in the middle of campus with 50,000 kids walking around with earbuds on and most of them are listening to hip-hop."

KUTX had already moved toward playing more rap in recent years, specifically cultural vanguards like Kendrick Lamar and Childish Gambino, but Reilly says the staff wanted more after noting a rise in the local scene. When the station's Saturday night slot opened up early last year, he hired the two homegrown hip-hop fanatics. Reilly says hip-hop specialty shows are rare in the public radio field, but it makes sense for KUTX.

"The approach we take with our specialty shows is hiring experts in that field," Reilly reveals. "Michael Crockett is a scholar of [Latin music], Jay Trachtenberg is a scholar of jazz, Rick McNulty is an expert of R&B. It's the same with Confucius and Fresh."

The hip-hop jocks, real names Jared Williams and Aaron Knight, met in 2011 when Fresh put up a local rapper's new track on his Fresh Prince of ATX blog, then got a call from Confucius, who managed the artist.

"He called me up and cursed me out," smiles Fresh. "'How'd you get that track? Take it down!'"

"We've been friends ever since," Confucius adds.

Their first collaboration resulted in co-hosting the Those Damn Comic Book Guys podcast, which discussed superhero culture in mainstream terms instead of hardcore nerdery. The Breaks, airing Saturdays 10pm-1am, acts as a similar forum for the two pop culture junkies. Last weekend, they debated Nicki Minaj's next rant.

"We're representing the kind of conversations happening in barbershops, in the streets, and on Twitter," explains Confucius. "We understood going in that personality-driven radio is the kind of radio that has longevity."

Being on-air in Austin has caused Fresh to reflect on the radio voices he experienced growing up.

"I listened to Tom Joyner and Doug Banks on KJCE 1370AM and I knew those people looked like me," he explains. "Later, we had Kidd Kraddick. He was syndicated. What I remember about them was their personalities.

"On The Breaks, we're gonna give you great music, which anyone with a good ear can do, but we want to give you personality."

Confucius and Fresh want to do the same for Austin.

"Our show is kind of the answer to every excuse that me and Fresh ever heard: That Austin music couldn't be played in clubs because no one knew what it was, that Austin radio couldn't have a successful hip-hop show because there's no market for it," says Confucius, whose playlists put ATX cuts like Loony's "Thru It All" next to material by Tory Lanez, Rich the Kid, and Drake. "Most hip-hop is sold as being cool. We're trying to make Austin hip-hop cool by playing it enough that people realize they can like it and not have to hide in the corner listening to it like it's porno in the Seventies."

"Before The Breaks, a lot of us didn't know how to work together," says Deezie Brown, an introspective rapper promoting his latest album, Judith, on the August 25 show. "We've all been crabs in a bucket – everybody wanting to be the first hip-hop act to blow up in Austin, but with The Breaks, now we have a platform we can all call ours."

This Friday at Barracuda, The Breaks continues to bolster the local scene with its Summer Jam showcasing the diverse sounds of ATX hip-hop: Brown, Teeta, Harry Edohoukwa, Kyle Lucas, and J Soulja, plus R&B breakouts Mélat and Jake Lloyd, and silky smooth producer Parallelephants. It's a prime opportunity to get in touch with Austin's modern urban music landscape.

"Our mentality is to give rappers opportunities so their careers will advance and hopefully ours will advance with them," Confucius offers. "It's about creating infrastructure."

Lazy Lester passed away August 22 at age 85. The Louisiana singer and harmonica player, born Leslie Johnson, counted among the architects of swamp blues via incredible singles on the Excello label – particularly 1958's rockabilly-tinged "I'm a Lover, Not a Fighter" and red hot B-side "Sugar Coated Love." The funny, laid-back bluesman enjoyed deep and lasting associations with Austin, releasing on the Antone's label and playing here frequently.

The Bubble Grows! The essential Austin recording studio will expand into a large, 95-year-old house on the same Hyde Park property it's occupied since 2005, confirmed owners Alex Lyons and Chris "Frenchie" Smith. Overseen by sound design consultants Acoustic Spaces, the renovation is expected to take up to six months. Since opening in 1998 off Slaughter Lane, the Bubble's tracked notables including Spoon, Fastball, and Lemmy Kilmister.

Austin's Music Community is helping Russ Hartman buy a stand-up electric wheelchair. The longtime local music supporter and editor of Austin Daze is afflicted with Friedreich's Ataxia and unable to walk. Following last weekend's fundraiser at Antone's, another Stand With Russ benefit goes down at the Continental Club on Saturday. Alejandro Escovedo, Matt Hubbard Trio, the Greyhounds, and Deadeye perform.

Summer Salt issued a statement Tuesday announcing the ouster of bassist Phil Baier over sexual misconduct after multiple women came forward with claims of predatory behavior. "We are troubled and ashamed that we didn't take action regarding Phil's behavior sooner," the remaining three members wrote. The Austin band recently signed to Epitaph Records, on which Happy Camper comes out Sept. 28.

Jason isbell dropped into the Continental Club last Saturday to play a 90-minute set with the Booze Weasels, a group of Joe Ely Band veterans led by guitarists David Grissom and David Holt, who also anchored Storyville. The tireless Isbell also played three sold-out shows at the Bass Concert Hall over the weekend. 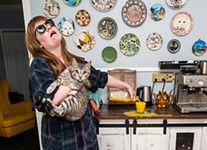