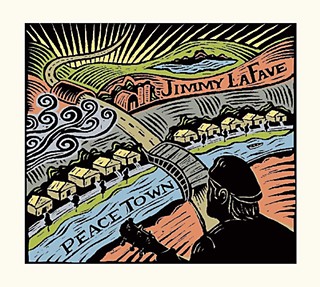 In May 2017, days before succumbing to cancer, Jimmy LaFave staged a final show in Austin at the Paramount Theatre, an all-star farewell and thank you to the music community he adoringly called home. Even in his own passing at the age of 61, LaFave's voice provided comfort, wisdom, and healing to a hurting world. Posthumous double-disc Peace Town arrives nearly a year later, a last gift from the incomparable song crier. Like calculated final collections from David Bowie, Warren Zevon, and Leonard Cohen, each song rings with meaning. Opening on Pete Townshend's "Let My Love Open the Door," LaFave recasts the pop anthem with a stirring emotional appeal, followed by one of only three of his own compositions among the 20 tracks, "Minstrel Boy Howling at the Moon." His honeyed, ofttimes wrenching voice in these recordings lacks the stunning range that defined his artistry, but retains his hallmark tenderness and immaculate ear for cutting to the heart of a song. Three Bob Dylan copyrights make the final cut, a breaking "What Good Am I," a poignant piano interpretation of "My Back Pages," and stripped "You're Gonna Make Me Lonesome When You Go," while his other inspirational well, Woody Guthrie, comes represented in the bluesy "Sideline Woman," chugging "Salvation Train," and poignant title track. Peace Town rings loudest in its vulnerability – fellow Okie Leon Russell's "Help Me Through the Day," David Ball's "When the Thought of You Catches Up With Me," and the Band's "It Makes No Difference" – but also through defiant and playful hopefulness with Bob McDill's "I May Be Used (But I Ain't Used Up)" and Chuck Berry's rumbling "The Promised Land." Butch Hancock's "Already Gone" and Tim Easton's "Goodbye Amsterdam" play to both ends of the spectrum in closing each disc. Goodbyes rarely sound so alive.