Playback: Love Us or Hiatus

Rare gigs and soft breakups from Iron Age and US Weekly 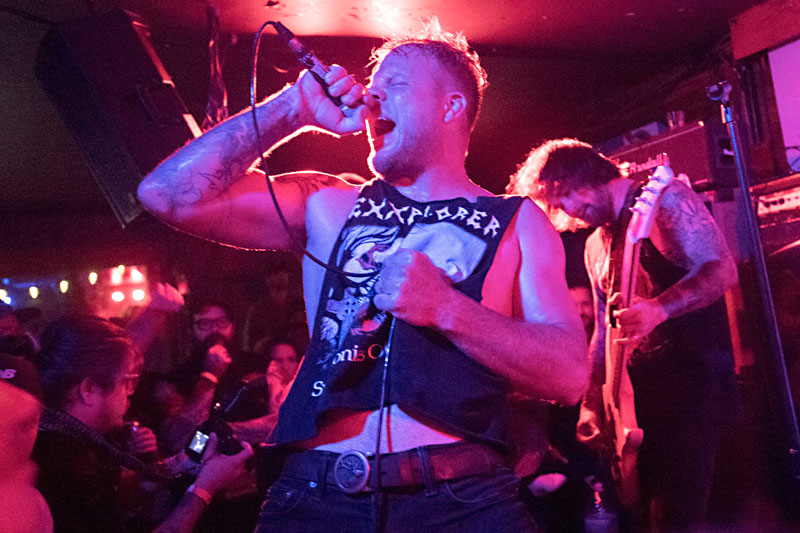 Music fanatics revel in witnessing performances by long-lost favorite bands. It hits you rough and familiar, like the first cigarette after getting out of jail. Last Sunday, I got a lung full of Iron Age.

The local thrash unit, a vital force in metal and punk circles in the late Aughts, went on semi-hiatus in 2011, playing once or twice a year – if that – and often out-of-town. In Austin, where they still hold "favorite band" status amongst many a tattooed townie, they've assembled just thrice since 2013. Last Sunday's underplay matinee at Hotel Vegas thus felt like Christmas in July.

Sans advance ticket sales, fanatical followers brought the small club to capacity lickety-split. By the time the quintet plugged in, the joint had turned into a pressure cooker of anticipation and body heat. Vegas staff took down some of the overhead fans to save crowd surfers from losing any flesh.

"You guys are brave," he complimented the crowd, churning so forcibly one had to be savage to occupy space near the stage. "So this song goes out to bravery!"

That precipitated "The Way Is Narrow" off 2009's Tee Pee Records-issued The Sleeping Eye, a brilliant LP whose cult is enhanced by being out-of-print and not on Spotify. That'll remain Iron Age's final release, a harsh reality confirmed by Tarpey who scoffed, "We're not doing another record," during the set.

Still, Iron Age was – and occasionally is – a great band that doesn't get enough due for being one of the best metal acts Austin's produced, yet remains content with playing undersized shows for die-hards.

Our love for bands is different from person-to-person relationships in that we don't desire closure when things are winding down. Even if Iron Age never releases new music, fans are always game for a one-off fling. Ninety minutes after the last cymbal crash at Hotel Vegas, another stellar heavy band, US Weekly, kicked off a set at Barracuda billed as their "last ATX gig." US Weekly (Photo by John Anderson)

Those three words came as a downer for fans of the young local band that, since forming in 2014, issued a full-length demo, two EPs, and last year's triumphant debut LP, a discography charting the quartet's growth from a post-punk band to jagged, raging, arty, crunch-pop berserkers.

"Who the hell's that tall guy?" yours truly wondered. Turns out founding bassist Ryan Curtis moved to California and fill-in BJ Thomas relished what singer Christopher Nordahl called his "first and last" show with US Weekly. The group's phenomenal drummer, Kent Hale, also preps for a move to the Golden State for grad school. That combined exodus provokes the band's purported conclusion.

Going down with the ship, then, is US Weekly's superpower catharsis. They possess an extraordinary ability to convey true emotional release, opening wounds that are broadly societal.

"Third-world realities blocked from my mind! Scroll past fatalities! Ignore the signs!" Nordahl screamed with utmost conviction over Ryan Fitzgibbon's zagging guitar lines on "American Piss." The frontman, looking like an all-American boy turned malcontent in leather loafers and tidy denim shorts, began a fitful dance with the microphone cable wrapped around his neck. The 100-plus-person crowd rapt, US Weekly delivered a gripping 40-minute set worthy of a denouement ... even if it isn't.

After the gig, Hale told "Playback" the "last ATX gig" declaration doesn't imply a firm breakup. They have another album nearly complete and he hopes they'll play shows again next summer when school's out.

If that doesn't work out, we'll cue the refrain "only the good die young." In the meantime, understand that finality in music remains as fleeting as existence. That's why I'll keep room on my shelf for more records from US Weekly and maybe even Iron Age.

Truth isn't only stranger than fiction. It's more moving, devastating, and gratifying too. Even Homer, Shakespeare, Vonnegut might not have come up with this scenario: beloved radio personality loses the ability to speak at the peak of his career. Even if they had, they would've written it as a tragedy, not a love story ingrained with music and resilience.

Radio Dreams: The Story of an Outlaw DJ and a Cosmic Cowgirl intertwines the lives and love of Joe Gracey, late architect of the progressive country radio format, and renowned singer-songwriter Kimmie Rhodes. Their recently published double memoir showcases both locals' knack for nailing music's life-affirming qualities while also providing deep context to their art.

"What emerged was roots music, which we were trying to preserve against the barbarians who will always try to tear down, disown, and downplay the roots of their own culture," writes Gracey, summing up the synthesis of Austin's Seventies. For Rhodes, whose songs have been recorded by Wynonna Judd and Emmylou Harris, selected lyrics help process heavy moments.

While either of their stories is memoir-worthy alone, the husband and wife format works wonderfully. In writing, as in life, Gracey and Rhodes completed each other. Rhodes and Smith perform at Threadgill's World Headquarters' gospel brunch on Sunday, 11am.

Blastfamous USA, the raw electronic aggro rap project uniting Zeale with Nght Hcklrs, continued their tradition of dropping an Independence Day EP with Busa Flock. The six-track effort grows the trio's intense sound with Frederick Douglass speech samples and guest spots from fellow ATXers Mobley, Phranchyze, Fort Never, and Blxpltn, who tear into a punk-rap military march. Sample lyric from the EP's middle-finger-wagging wokeness: "Fuck the DNC for what they did to Bernie/ Fuck a racist P.D./ Fuck a neo-Nazi/ Fuck the alt-right ideology." 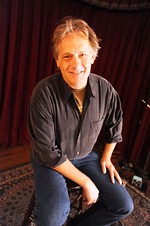 US Weekly
US Weekly (Record Review)