40 Songs to Make You Feel Better (or Worse) About Drinking

A sampling of drinking songs local, south of the border, and global

What began as a piss-take on post-punk from one of the first UK acts to rev the sound to Motörhead specs became a powerful mid-tempo stomper live. Although a celebration, "You're like a kind of religion," it doesn't downplay hooch's significant downside: "Tonight I'm wearing incontinence pants!" – Tim Stegall

The Latin Grammy-nominated Puerto Ricans shout out hardworking servicemen/women by prescribing shots. The internationally charting dance track chronicles post-breakup club activities as the reggaeton duo and Wild Dogz Music CEOs prove that "Bartender" is the only English you need to know in a club. – Clara Wang

From Spanker Madness, an album dedicated to wacky weed and the futility of the War on Drugs (the policy, not the band), "Beer" pointedly, and in great detail, eschews the charms of other mind-altering substances in favor of an ice cold brew. Former Austinite Wammo and his fellow all-acoustic River City eclecticians inject Johnny Cash's chickaboom with hardcore punk fuel. – Michael Toland 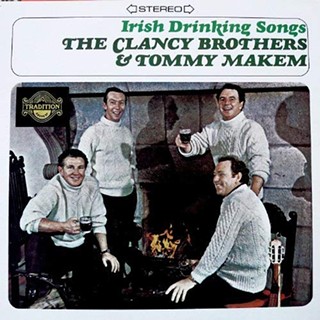 Australia's answer to the Rolling Stones of Altamont infamy, the Beasts' mission of fermented decadence comes to a head on the title track of their third album, which emulates the effects of the titular milk/vodka concoction through a slow, hazy, blues grind. Singer Tex Perkins mutters and moans at his most dissolute. – Michael Toland

On one of Ten New Songs, Leonard Cohen weaved alcohol and sex together in a manner both familiar and different from his usual poetry. The late Canadian wrote the song after stumbling upon Boogie Street in Singapore, a place so far removed from the experience that he went slumming in song. It became a play in 2016. – William Harries Graham

King of the traditional Mexican genre ranchera, Vicente Fernández penned "Borracho Sin Cantina" ("Drunk Without a Bar") about a forlorn and desperate troubadour begging the bartender to leave him alone at the bar. The Guadalajaran's booming voice encapsulates desolate heartbreak, trademark to many of his award-winning traditional ballads. – Alejandra Ramirez 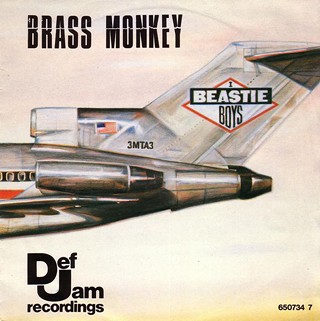 A perfect summation of everything right and wrong with the New York City hip-hop trio's raucous, Rick Rubin-produced debut, Licensed to Ill. Despite cloying, white boy swagger, the blaring sample from Wild Sugar's "Bring It Here" and an infectious beat cemented the clamoring ode to pre-mixed cans of OJ, vodka, and dark rum as a definitive party anthem. – Libby Webster 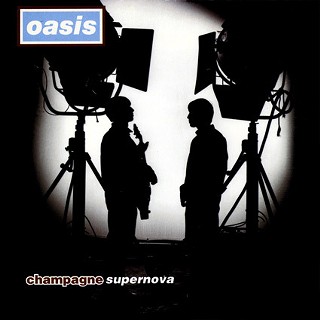 Fifty seconds into seven-and-a-half-minute epic "Champagne Supernova," complete confusion reigns. What the hell does "Slowly walking down the hall/ Faster than a cannonball" mean? Author Noel Gallagher has proved dismissive of any criticism, so it's best to approach the Top 20 U.S. single by pouring another glass of bubbly and waiting for the guitars on the earworm chorus to kick in. – Abby Johnston 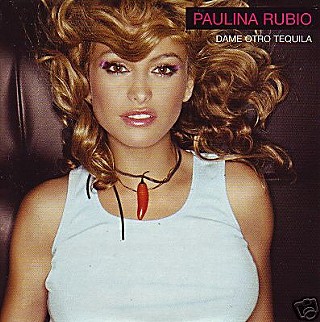 Latin No. 1, "Dame Otro Tequila" dances upbeat horns to a hook that brokers no argument: "Give me another tequila." Mexican pop star Rubio toasts bad lovers and future successes by setting fire to a cheater's wardrobe, reveling with oiled-up male troubadours, and pouring shots in an MTV music video. Pure danger around bad breakups. – Clara Wang

Combustive Damned drummer Rat Scabies once claimed he and manic guitarist Captain Sensible staved off hangovers on tour by "staying drunk." This boozy creed from the psych-and-prog-damaged The Black Album disguises a tender breakup lyric with one of the album's few two-chord punk ravers: "Friends of yours keep asking where you are." – Tim Stegall 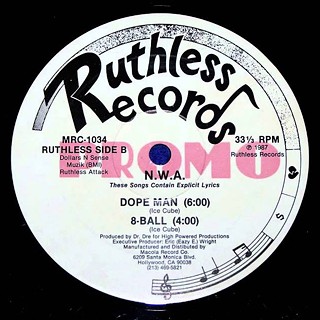 Eight-ball retains a few meanings, but here Eazy-E raps gleefully about malt liquor: "Olde English 800, because that's my brand/ Take it in a bottle, 40, quart, or can." Recklessly boozy lyrics from the Compton MC (1964-1995) match Dr. Dre's ragged sampling of the Beasties' "Paul Revere" and Public Enemy's "Terminator X Speaks With His Hands." – Kahron Spearman

This Trinidadian payout is like Dave Chappelle's date in Half Baked – circa 1957. Over island horns and calypso guitar, Cecil Anderson recounts his lady's order: a pint of gin, a Pink Lady, a Bloody Mary. A lemon pop with rum on top, they call it the Zombie. When she calls for more rum, he goes deaf and dumb. He only had 50 cents. – Dan Gentile

Top 40 bow from the second-best-selling rock album of all time, "You Shook Me All Night Long" bops bubblegum compared to the doomy gravitas of its Back in Black B-side, largely considered a tribute from singer Brian Johnson to his dead drunk predecessor Bon Scott: "So don't worry about tomorrow, take it today/ Forget about the check, we'll get hell to pay." – Raoul Hernandez 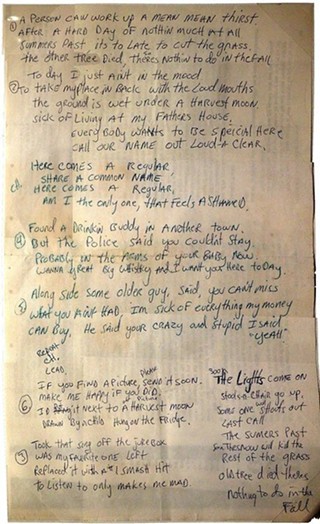 If netting the immortal Russell Tyrone Jones (1968-2004) wasn't enough, producer E-Swift recalls that the Wu-Tang spitter and the 'Liks "had the biggest bottle of vodka on the planet, finished it before we started recording, and no one passed out before the song was over. It was a great evening." – Kahron Spearman

Hardly the granite power chords associated with the hardest-rocking hooligans ever to emerge from London's Shepherd's Bush, Pete Townshend's grim, introspective The Who by Numbers tunes include this 12-step self-loathing set to an odd country/prog hybrid: "I'm a faker, a paper clown/ It's clear to all my friends that I habitually lie; I just bring them down." Keith Moon's drum genius redeems all. – Tim Stegall 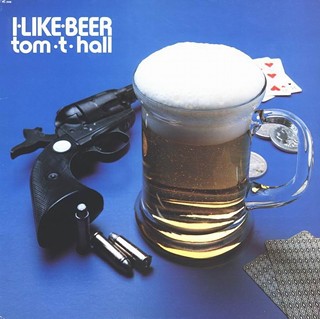 Country's genius songwriter, 82, once skewered catty parents with "Harper Valley PTA" and cataloged a janitor's treasures on "(Old Dogs, Children and) Watermelon Wine," but the Kentucky native also reveled in sucking down suds. Other libations are too harsh, expensive, and disabling/enabling for Hall, who prefers the "mellow," "jolly-good fellow" he transforms into with an ice-cold brewski. – Abby Johnston

American bartenders might raise an eyebrow if you ordered rum mixed with an energy drink, but the sugarcane liquor flows more versatile in its Caribbean homeland. Hence, Beenie Man and Future Fambo's bouncy single complete with hiccups, which quenches the thirst brewed from a steamy Jamaican dance hall. Not the first time a lousy drink made for a catchy hook ("Gin and Juice"). – Kevin Curtin

Argentinian Little Green Men get drunk in love and offer superstitious advice not to brush your hair in bed lest travelers be delayed. Or did they mean she shouldn't be so frigid? Originally written by Alcohol Etílico, which included members of Enanitos, the song erupted when Enanitos recorded it a decade later. – Christina Garcia

Scottish pirate metal quintet lauds grog's priority in the buccaneer's life with a thrashing sea shanty from Sunset on the Golden Age that chronicles the ocean-faring quest of "a man named Fred" who "brews his mead with psychotropic weeds" for an "alcoholic proof that's through the roof." Forget the Fountain of Youth. – Michael Toland

High among the treasures of The Bootleg Series Volumes 1–3 from 1991 nestles this then-unreleased 100-proof folker. Though its origins remain widely disputed, most believe it's an ancient Irish drinking song. Covered by multitudes, the Bard's version still resonates loudest in fermenting his sweet sour mash vocal delivery with lonesome acoustic guitar. – William Harries Graham 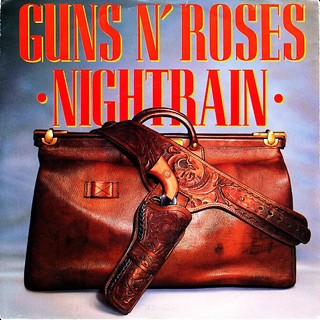 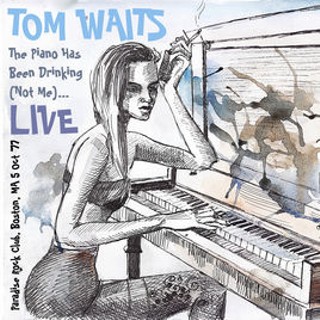 Unflinching character study of the neighborhood drunkard, this ivory trader from third LP Small Change skews near-nonsensical lyrically, both depressing and biting. Delivered with an air of being half-slumped against the wall, Waits' signature vocal gravel grates against the unpolished playing of an out-of-tune piano. – Libby Webster

All of this quintessential bluesman's works center on whiskey and women, and in that order as noted in the title of a 2004 collection of his best works: Whiskey Is My Habit, Good Women Is All I Crave. The Nashville-born, Indianapolis-raised pianist and Ray Charles precursor died from alcoholism at 30, leaving a smooth urban vocal style and sadly ironic songs. – Clara Wang 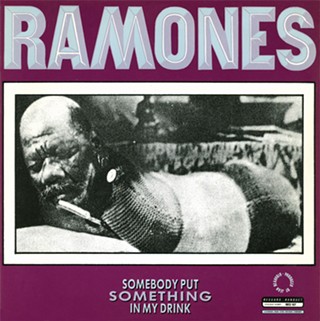 Shane MacGowan works harder than anybody to draw romantic poetry out of hardcore alcoholism, laying out his manifesto in this tin whistle anthem on the Irish rockers' debut Red Roses for Me. The singer's remarkable ability to make a contemporary composition sound centuries old puts him squarely in a long tradition of drink-soaked Celtic folk minstrels. – Michael Toland 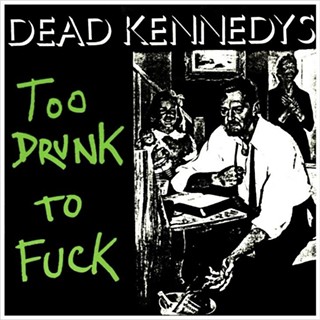 In the S.F. punk legends' fourth single, our protagonist tumbles through a moron-packed party with flaccid results. Ending in retching sounds and diarrhea, the twisted surf rocker reached No. 36 on the UK charts, the first single title touting an F-bomb to do so. It's still banned on-air and censored in stores. – Rachel Rascoe

Accordion master Ramón Ayala gurgles a jilted lover's pitiful woes in one of Mexico's most popular Norteños about hitting the sauce. Accompanied by bajo sexto in a style influenced by German folk music, the 1980 hit continued a rise to fame begun in the Sixties. That dec­ade's "Comal y metate" contradicts rumors he's too drunk to even date. – Christina Garcia

Port Arthur's kozmik oracle rarely relinquished her bottle of Southern Comfort once fame hit. Her favorite drink while a student at UT remains anyone's guess, but she recorded her first track, "What Good Can Drinkin' Do" in Austin during that time. Written after Joplin drank herself into a stupor, her howls and whimpers are boozed-soaked blues legend. – Christina Garcia 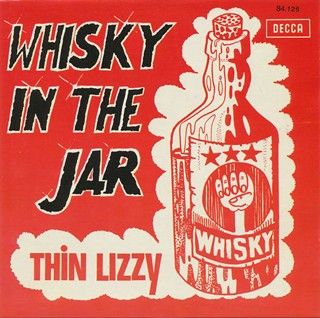 Trad Scottish ballad "The Highwayman and the Captain" fermented into Irish "Whiskey in the Jar" beginning in the Fifties, detailing a brokenhearted rogue and his mistress. Hard rock rapscallion Phil Lynott, raised in his mother's hometown of Dublin, rode his plaintive murmur on it behind the first iteration of his UK trio to the top of the charts. Metallica employed Lizzy's arrangement on 1998's Garage, Inc. – Raoul Hernandez 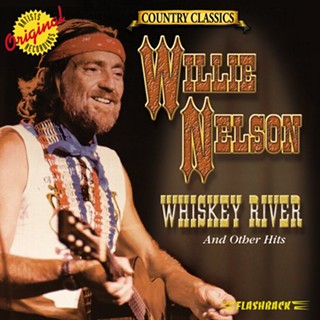 This supercharged boogie opening Willie and Family Live took Nelson to No. 12 on the country charts. It's opened all his shows since. To find the true melancholic heart of this Texas dance hall standard, seek former Nelson drummer Johnny Bush's original 1972 shuffle: "Feeling the amber current flowing from my mind/ To a warm and empty heart you left so cold." – Tim Stegall

A version of this article appeared in print on July 13, 2018 with the headline: Whiskey River