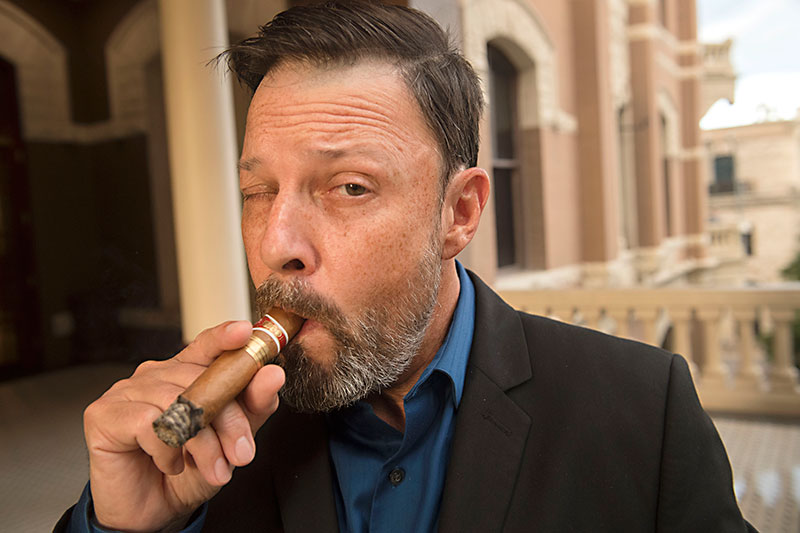 The Melvins fused to Austin at least as far back as June 3, 1990, when they tag-teamed the Cannibal Club on Sixth Street with glow-painted homegrown post-punks Ed Hall. Despite the ensuing three-decade love fest, few locals know a former Melvin has resided among them for half that time span. Mark Deutrom's relationship with the Washington state sludge lords lasted over a decade and involved seminal sounds, but his work as a producer and solo artist goes back to the mid-Eighties same as the band.

"Resident alien forever," Deutrom was born in the UK and still holds British citizenship. The Beatles on the telly and American Forces Network radio in Germany ignited his musical trajectory, which arced through arena rock concerts in El Paso during his teen years. Prog rock led him to the California Institute of the Arts as a composition student.

"Very post-serial, academic, and highly structural," he explains over juice at Eastside watering hole Weather Up. "It was very alienating, so I dropped out and moved to Hollywood."

Deutrom arrived in Los Angeles alongside West Coast punk: X, the Blasters, Fear, the Germs. Moving north to San Francisco in 1982 introduced him to the metal scene of Possessed, Death Angel, and Metallica. His crossover act Clown Alley dropped debut Circus of Chaos in 1986 on Alchemy Records, co-founded by Deutrom with Captain Beefheart sideman Victor "The Mascara Snake" Hayden.

Alchemy also released the Melvins' debut full-length, 1987's Gluey Porch Treatments, which Deutrom produced. The label proved short-lived, but Deutrom stayed with the Melvins, overseeing their second album Ozma and serving as sound engineer. When the band's bass slot opened up ahead of major label debut Houdini (1993), Deutrom stood at the head of the line.

"I'd already done almost every single thing you can do with a band by then," he says, "They already had tours booked, so maybe [hiring me] was purely an act of desperation."

He laughs, but his performing on four Melvins albums – alt-rock classics Stoner Witch and Stag, plus experimental outliers Prick and Honky – is no joke. His tenure came to a sudden end during sessions for The Silent Treatment, his psych-rocking first solo album.

"I was in the studio recording and I got a phone call from Buzz [Osborne]," recalls Deutrom. "He said, 'We're gonna move in a different direction, and that doesn't include you.' I found it personally pretty offensive after working for them for 10 or 12 years. That was the loss of dear friendships."

Deutrom and the Melvins haven't spoken since.

The former returned to England, while The Silent Treatment came out in 2000 to little notice. Heeding advice his mother gave him back in the late Eighties, Deutrom moved to Austin in 2003. Once here, he fell victim to a problem not uncommon to the creative class: depression.

"I was just so disheartened with trying to get anybody to put out The Silent Treatment," he says softly. "Licensing it to Tee Pee took two years, and then they didn't really do anything with it. When I moved back from the UK, I had some terrible things going on in my personal life. I had a lifelong issue with serious clinical depression from childhood, and it escalated to the point where I was really considering what other options there were in life, like becoming a professional gardener or going to cooking school."

Working through his issues, Deutrom pieced together 2011’s The Value of Decay, which wrestles with its creator’s state of mind like The Dark Side of the Moon for the stoner rock generation.

Counselors sometimes encourage sufferers to work through their illness by being creative. Problem is, depression sucks away energy and motivation. Nevertheless, working through his issues, Deutrom pieced together 2011's The Value of Decay, which wrestles with its creator's state of mind like The Dark Side of the Moon for the stoner rock generation. The notion that it might be his major artistic statement seems to unsettle him.

"There's a kind of darkness to it," he acknowledges. "It's really snarky and kind of vicious. I couldn't call it a fun record, but it goes some places that's for sure."

Deutrom followed The Value of Decay with Brief Sensuality & Western Violence two years later ("my first record as a sane person"). In 2016, he formed touring trio Bellringer and recorded its debut Jettison. A new solo album, currently being mastered, releases early next year, with tour dates lining up.

Meanwhile, the reissue of his catalog continues through top-tier metal label Season of Mist, whose U.S. HQ is in Philadelphia.

"I've always viewed Mark as somewhat of a cursed artist," says SOM owner Michael Berberian, who handled Deutrom's signing personally. "For all of his genius songwriting talent and incredible, unique perspective on music through his associations with the Melvins and his terrific solo outputs, I felt he never got the recognition he truly deserved."

Parallel to his solo oeuvre, Deutrom continues to produce, usually alongside prolific local engineer Chico Jones. He describes his m.o. as that of a live-musicgoer who stumbles across an act he likes, then approaches them with, "Ever thought of making a record?" In that capacity, he spearheaded albums for Austinites Woodgrain, Gorch Fock, and the Well. Deutrom also helmed alt.country favorites the Meat Purveyors' fourth album Pain by Numbers.

"[Mark] suggested we employ a strategy that we treat it more like playing a show, which at the time meant drinking bourbon to excess," emails renowned post-punk axeman and Purveyors bandleader Bill Anderson. "For better or worse, it was a hilarious and mostly enjoyable process. I would definitely recommend Mark to young bands who are doing something out of the mainstream and looking to find their sound. Mark's confidence can be somewhat infectious."

Said contagion also works with his wife, animator and graphic designer Jennifer Deutrom, whose credits include Richard Linklater's Waking Life, Lars von Trier's The Five Obstructions, and the Adult Swim series Dream Corp LLC. Besides creating his album covers and the video for his 2013 single "Ruckus Juice," she animates Riffology, a series of visual interpretations of her husband's guitar licks. As such, Mark Deutrom's route from the ranks of one of the most respected bands in underground rock through a period of personal darkness has come into a happy marriage and artistic household.

"It can be," he chuckles. "It's either hyperartistic, or we're watching Mad Men like everybody else."

Monsters in the Mist

The Value of Decay (2011) Louder, heavier, and weirder than the debut, the album's orchestral feel helps convey its triumphant battle against dark forces. Key tracks: "Dim Candle," "Cities of Gold"

A version of this article appeared in print on June 22, 2018 with the headline: The Value of Decay