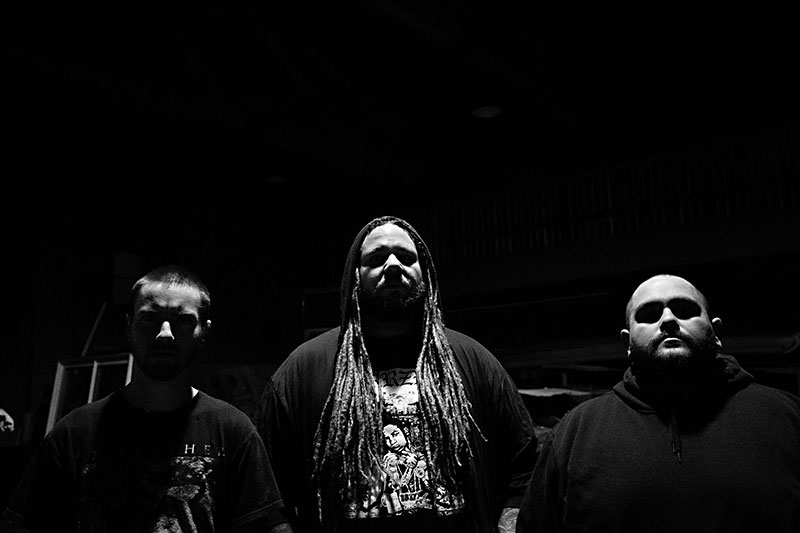 Last November at the Lost Well, Primitive Man stole the show out from under headliners Bell Witch by sheer brute force. The Denver trio's wall of doom, channeled through bearlike frontman Ethan McCarthy, shook the walls and rattled the cages of those that exited the metal cave singing the praises of Primitive Man.

"We always have a nice time in Austin," emails McCarthy simply. "It was a good show."

2013 debut LP Scorn flays the foundation of the group on the opening title track, 12 seismic minutes ranging from glacial to funereal. Cushioning the singer's ursine larynx expulsion, his guitar sounds like the flight deck of an aircraft carrier, and Joe Linden shatters cymbals into shrapnel at every turn. Monstrous 2015 EP Home Is Where the Hatred Is and last year's full-length Caustic, all on Philly foundry Relapse Records, also blacken white noise into cataclysmic death.

"Scorn was probably our breakout album, but Caustic has been the most well-received," writes McCarthy. "Lots of 'I didn't like your earlier material as much' talk. But, I have to believe that the constant touring over a six-year span is what really put us in the minds of people who like heavy music."

Counterbalance to such apocalyptic weight is a warren of other aural interests for the group leader: True crime podcasts, the detective jazz of Germany's Bohren und der Club of Gore, Salt Lake City pop troupe Choir Boy, techno-gaze L.A. diva Camella Lobo, Aussie punks HTRK, and rappers Maxo Kream, Curren$y, and Project Pat. Even so, heavy is as heavy does.

"Always been influenced by bands like Crowbar, Neurosis, Disembowelment, Evoken, Corrupted, etc.," concludes McCarthy. "They informed us through auditory osmosis that it is an absolute must to be as crushing, honest, and heartfelt as you can."