The quintet rewrites the classic tapestry of an "Austin sound" 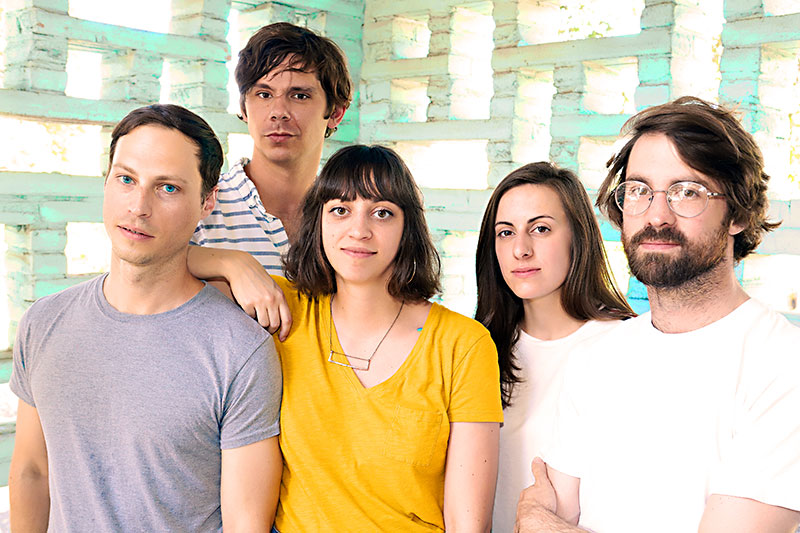 Hard to tell exactly which medium Laura Colwell is addressing when she explains Sun June.

"Pull back from it, go really big, then suddenly go in, tighten it," the singer rattles off, hands animated.

Next to her, guitarist Stephen Salisbury starts speaking about color, both musicians trying to describe their approach to songwriting. Given the two founding members' background in film, the line between visuals and sonics often blurs. Their local quintet's remarkable debut, Years, out June 15, offers an understated, cinematic amalgam of heartache.

Colwell and Salisbury met in 2014 while working in director Terrence Malick's carpeted, West Austin editing rooms. Amidst the delirium that accompanies piecing together a film, an email chain that included a joke about rewriting the Pixies' "Where Is My Mind?" had a domino effect. Picking from instruments strewn throughout the office – Malick was working on Austin-based Ryan Gosling vehicle Song to Song at the time – the pair began writing songs under the moniker Jeff, utilizing the dimly lit workspace as a practice center.

"We got away with it because Malick was in L.A. trying to finish Knight of Cups," says Colwell. "Not that we didn't work."

By 2016, an internet algorithm kept confusing Jeff with a DJ duo from Fort Lauderdale, so they ditched the name for Sun June and rounded out the current lineup with bassist Justin Harris, guitarist Michael Bain, and drummer Sarah Schultz.

"We've had a successful time getting musicians who are much better than us involved," Salisbury deadpans, confirming Sun June as the first major project for both he and Colwell.

The two split songwriting duties, but where one's mind ends and the other begins feeling indiscernible, an intuitive creativity clicks. Same for their videos. The duo shared directing and editing duties in making dreamy, melancholic clips for "Young" and "Discotheque."

Years hovers between folk and guitar pop. Colwell boasts a quavering, lonesome coo as unfussy as it is emotive, harmonizing with Schultz as Bain's deft guitar work darts in and out. Carefully sequenced and wandering, the 10 tracks are imbued with gentleness, longing.

Tony Presley, half of local label Keeled Scales, lived above Estuary Studios and heard the band's work coming through the floorboards. After texting engineer Evan Kasper to inquire the name of the act, he signed on to release the debut. Now Sun June embarks on its first touring – two weeks up the West Coast, two weeks on the East Coast later this summer, then a run of dates in Italy this fall – with the last leg coming to fruition from an Italian booker who emailed the band after hearing "Young."

In the same vein as fellow locals Lomelda, Hovvdy, and Molly Burch, Sun June rewrites the classic tapestry of an "Austin sound" by moving away from psych and country twang. Instead, their sound thrums earnestness and the isolation of Texas sprawl. The band calls Years a "we've been broken up a long time" album, and Sun June's sound "regret pop."

"It's that nostalgic feeling," offers Schultz. "You're going about your day, you hear a certain line, and you're like, 'Oh, I didn't expect it to hurt in that way.' Everyone has that little 'gotcha.'"

Sun June celebrates the release of Years at Spider House on Thursday, June 14, with Julia Lucille and Daphne Tunes.

A version of this article appeared in print on June 8, 2018 with the headline: Song to Song