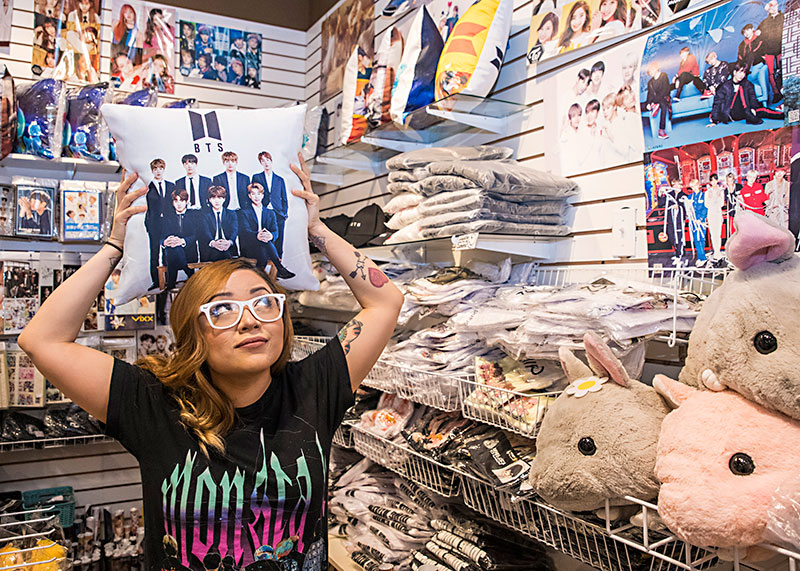 On a Saturday evening at H Mart, the new Asian supermarket near Lakeline Mall, a DJ in the food court plays "Shake It" by Sistar, a Korean girl group that sounds like Taylor Swift flirting with Bruno Mars. As its video splays out on the projection screen, an Asian elementary schooler in a blue polka dot dress and pink Converse spins in circles. Her parents snap photos between bites of Korean fried chicken.

Although Austin arrived to the K-pop party late, Friday night at Karma Lounge proves quite the contrast. A crowd of 100 knows the choreography to each video by heart. They scream every time one hit transitions into the next.

Since 2013, I Heart K-Pop principals JackieSue Gauna and Keith Marcks have DJ'd monthly events at all-ages venues under the guise of DemographicsEnt. Their new residency at H Mart courts the next generation of K-pop lovers. Since neither founder is Korean, and they share backgrounds as house music DJs, the pair make unlikely ambassadors, particularly when the former reveals that her journey into the genre began with Netflix show Boys Over Flowers.

Aside from the language barrier, Korean pop music doesn’t sound that different. Think candy pop, but with a trap backbone and EDM pulse that’s attracted producers including Skrillex, Steve Aoki, and Diplo.

"I wanted to learn the language, so I started watching the K-dramas, which are romantic bullshit, but the music was completely different," says Gauna.

A Korean Meetup group inspired the DJ nights, then she won a competition to attend a bootcamp in Seoul and tour manage Korean-Chinese superstars Exo. Gauna dated Marcks at the time, so she converted him to the trend and even today they share DJ duties. Transitioning from house to K-pop manifested a natural progression.

"People noticed it immediately when we started beat matching," says Marcks. "With house music, you expect it to be mixed, so you don't even pay attention. With K-pop, when JackieSue mixes into a new song, people cheer."

Aside from the language barrier, Korean pop music doesn't sound that different. Think candy pop, but with a trap backbone and EDM pulse that's attracted producers including Skrillex, Steve Aoki, and Diplo. English phrases sneak into the choruses, giving non-Korean speakers a hook they can sing along with.

Although K-pop still feels foreign to most Americans, it won't for long. The $5 billion industry finally found its U.S. crossover act with BTS, a seven-member boy band in the mold of 'N Sync that debuted with "No More Dream" in 2013. Four years later, the group beat out Trump as the most popular topic on Twitter – 502 million mentions to 213 million – while earning Billboard's Top Social Artist Award two years running, 2017-18.

Music videos help fuel that ubiquitous social engagement. On May 18, BTS released a spectacular and bizarre video for "Fake Love." Sets shimmer in hi-def pastels, then everything fades to a dystopian sepia. Rooms explode in flames and flood with water. One singer lays in the fetal position in a pile of Snickers bars – learn why in the fan theory video.

Meanwhile, one could write a contemporary dance thesis on the choreography. To learn the moves yourself, look up the official video. Austin's Asian American Resource Center also offers dance classes twice a month.

Although Gauna felt underwhelmed by "Fake Love," it streamed 41 million times in the first 24 hours. That makes it the most popular release behind Taylor Swift's "Look What You Made Me Do" (43.2 million). For context, South Korea's population is 51 million, less than one-sixth the size of the United States.

"It's a rare chance for both fans and music industry professionals to experience something that's really unique, from a Western perspective," says SXSW Head of Music Festival James Minor. "The draw K-pop artists have is undeniable, but the open-mindedness of the crowd is pretty astounding to me."

"I have visited several cities in the United States for performances and music video shooting, but I had never visited Texas," revealed Crush via email. "The biggest attraction of K-pop is that there are many things you can enjoy with both your eyes and ears."

At local I Heart K-Pop parties, one might expect a primarily Asian crowd, but that's not the case. Despite Asian-Americans being one of the city's fastest growing ethnic groups (at 8% of the Austin population), Koreans make up only 8% of that demographic. At Karma, they represent proportionally in one of the most diverse gatherings one can experience in Austin.

"It's not just white people, black people, Korean people," says Gauna. "It's everybody."

Given the amount of non-Korean speakers, an event of this sort could turn ironic, but it's eagerly awaited all month and some regulars even travel into town for it. Jeremiah Kaleikaumaka, 19, drives two hours from Del Rio to attend. He's hard to miss, thanks to kinetic dance moves and a look straight out of a music video.

"Most of my wardrobe is inspired by Korean music," he affirms. "From the hair, to the makeup, to the clothes."

"My favorite thing about it is all the new friends I make with a common interest," she says, adding her love of dancing to BTS, Big Bang, and Monsta X, who perform in Houston on July 29.

Fans like these look forward to K-pop night so much, it can be disappointing to not to hear their favorite songs. The solution from Gauna and Marcks are special all-request nights called "The Bops," which is their personal slang for banger. The requests begin in the Facebook event discussion and continue on a paper list at the club. It's another way to make I Heart K-Pop nights feel more like a community gathering, one they don't expect to stop expanding anytime soon.

"There's two types of people in the world," says Marcks. "Those who like K-pop, and those who will."

An elaborate EDM/trap symphony from a group with 150 million albums sold.

Undeniable hook: "You can call me monster." 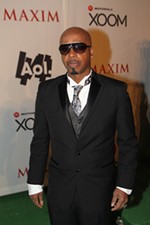