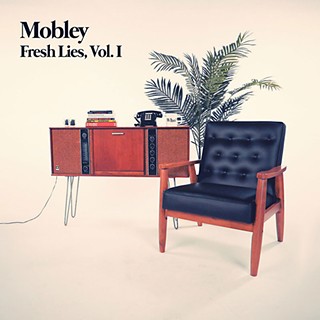 As a "post-genre pop" artist, Anthony Watkins II packs messages into a musical bandwidth almost exclusively reliant on window dressing – oversized hooks and mathematical equations-turned-lyrics by Scandinavian lab-coat producers like Max Martin. Not so with Austin's Mobley, whose songs are the means to an end, and the end is precise messaging. He calls sharp and luminous album-not-an-album Fresh Lies, Vol. I the start of an anthology that employs "romantic interplay as a metaphor to explore my relationship, as a black man especially, with my country." For example, lead single "Tell Me" calls up a 21st century freedom song disguised as a contemporary pop tune, because in certain contexts black people are still running, not unlike runaway slaves escaping Antebellum patterrollers: "Right pacin' left, the back roads are walkin'/ If we just reach the crossin', must reach the crossin' before this county sees the light of day." His versatility as a singer, particularly a subtle elasticity, consistently bends and pulls requisite emotions through their loops. Mobley plays the time traveler on "Young Adult Fiction," which lightly borrows from Nina Simone's mambo/spiritual "Sinnerman," updated with a hustling patter of digital snares: "All your life you've been waiting/ I've got news for you, Simone/ The future isn't home." Fresh Lies, Vol. I explains "the Negro problem" to maximalist pop effect. (CD release: Saturday, June 2, Mohawk.)