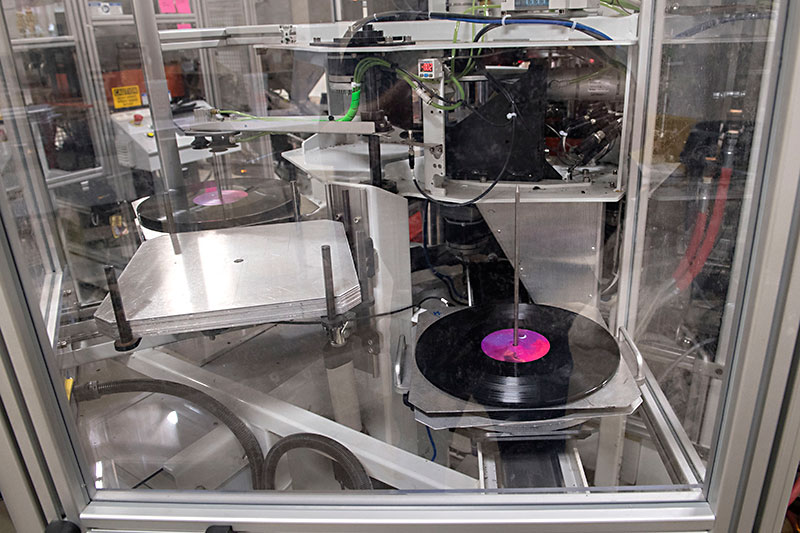 The first copies of Shakey Graves' Can't Wake Up roll off the presses at Gold Rush Vinyl. (Photo by John Anderson)

Inside the industrial complex of a remarkably indistinct North Austin office park, something unprecedented is happening. Tiny black pellets of polyvinyl chloride are being melted into gooey biscuits, flattened between two round metal plates, and shaved clean with robotic blades. Hundreds of copies of Shakey Graves' new LP, Can't Wake Up, sit on spindles – cooling off.

Six weeks have already passed since Gold Rush Vinyl began turning out records and founder Caren Kelleher says business has been "constant." In the lobby lies a copy of one of her first orders: a Newport Folk Festival protest song compilation titled Speak Out that hits shelves on Saturday for Record Store Day. In the listening room, there's a test pressing for Austin pop sophisticate Mobley's forthcoming Fresh Lies Vol. 1.

At this stage, Gold Rush's selling point is its speedy turnaround. A decade of increased demand for vinyl has led to long waits at pressing plants, typically between three to six months. Kelleher says her company can fill orders in four to six weeks.

"I've been the frustrated person waiting eight months for a pressing," she reveals. As a San Francisco-based band manager, her acts got offered support slots on low-paying, but high-profile tours where their merch money was essential. "I'd tell the pressing company I'd pay triple to get the records in time for the tour and they'd say no. That's why I wanted to focus on short runs."

Kelleher says small orders of 100 to 250 units are common for them, and that they press LPs, 7-inch singles, and 10-inches in various colors and weights. They outsource the creation of the metal stamper – a more industrial process – to Nashville. They also order out the record sleeve, but assemble them in-house.

Gold Rush doesn't offer upfront order prices. Customers fill out a website form and receive a call to work out a quote. Artists can lower order prices by assembling their own sleeves in the warehouse.

Asked if she has a system to prioritize Austin artists, the onetime Google Music exec said no, but was open to the idea. Kelleher says Gold Rush gets significant business from locals because as soon as their test pressing hits room temperature, they can listen to it and give production the thumbs up. They can also save precious dough on shipping by picking up orders in person.

"The machines aren't special," shrugs Gator Russo, Gold Rush's in-house engineer. "There's no real innovation in record presses: You heat it up, press it, and trim – same as it's always been. Our secret sauce is in the mechanical infrastructure."

Russo says his proprietary system of boilers and compressors provides the necessary steam for the machines and that's what sets this local endeavor apart. He claims boilers at record pressing plants are notorious for failing, which delays production. With a background in manufacturing systems, he believes his unique set up gives Gold Rush Vinyl unparalleled dependability.

Four festivals transpire in Austin over the next four weekends, so now's the time to think start thinking about which wristbands you'll be strapping this year. Monday, Utopia Fest announced a move from Uvalde County, three hours out, to a site just over an hour away in Burnet County for its 10th annual get-down, Nov. 2-4. Starring STS9, Patty Griffin, Lukas Nelson, Valerie June, and more, the gathering teams founder Travis Sutherland with Down in the Oaks Entertainment, which owns a massive rural ranch befitting to the fest's moniker.

Indeed, festivals today either buy the farm or risk "buying the farm." Just ask Old Settler's Music Festival, which debuts this weekend at a 145-acre plot they purchased in Tilmon, southeast of Lockhart. Recall they were ousted early from their long held home in Driftwood amongst much controversy from new competitors Driftwood Music Fest, which OSMF then smacked down with a lawsuit.

Another new festival promised unveiling Tuesday, but postponed at the last minute. The previous week, San Marcos' Float Fest stole everyone's thunder with a heavy-hitting lineup that was almost as much of a coup as using river tubing as means to stage an outdoor fest in July. They got Tame Impala, Bassnectar, Run the Jewels, Lil Wayne, and Snoop Dogg. They almost challenge the rap star power of JMBLYA, which boasts the fab four of J. Cole, Migos, Cardi B, and Kevin Gates at Circuit of the Americas on May 5.

Before the month's out, expect the loudest of all festival announcements: ACL Fest.

Other fast-approaching convergences are retooling their models in 2018. EDM rager Euphoria Fest has scaled back to a single day at Carson Creek Ranch on May 12 surrounded by months of branded club shows and group activities. Former tenants at that same site, Levitation, return next week from a year off by completely flipping the script with one weekend of 30 individually ticketed concerts featuring impressive lineups of psych, metal, punk, indie, and world music.

Deductions on the recent "Playback" tax filing revealed over $1,400 dropped at Austin record shops in 2017. Even so, I've never set foot into one on Record Store Day. Not because it's a hotbed for vinyl scalpers or, worse yet, people who enjoy picture discs, but thanks to my enjoyment of a more casual shopping experience.

Miranda Lambert, who keeps a home in South Austin, won Song of the Year at last Sunday's Academy of Country Music Awards for the track "Tin Man," co-composed by localized Houstonite Jack Ingram.

Pocket Sounds, solo project from multi-instrumentalist Mike St. Clair, releases a debut EP Wednesday with a full-band performance at the Mohawk. Never mind his sideman credentials including Okkervil River, White Denim, Polyphonic Spree, and the Glenn Miller Orchestra, the five-song You Are Not Alone reveals St. Clair as a gifted vocalist searching for meaning over a filtered bed of drum machines, horns, and pocket piano that beautifully stutters and soars.

Atash at Carnegie Hall: Austin's world fusionists collaborate with teenagers from St. Stephen's Episcopal School on a four-part "Global Harmony" program Monday at NYC's famed concert space. That piece was composed by Atash instrumentalist and musical director Roberto Paulo Riggio and will be conducted by the group's violinist John Moon.