Playback: The Greyhounds Hoof It 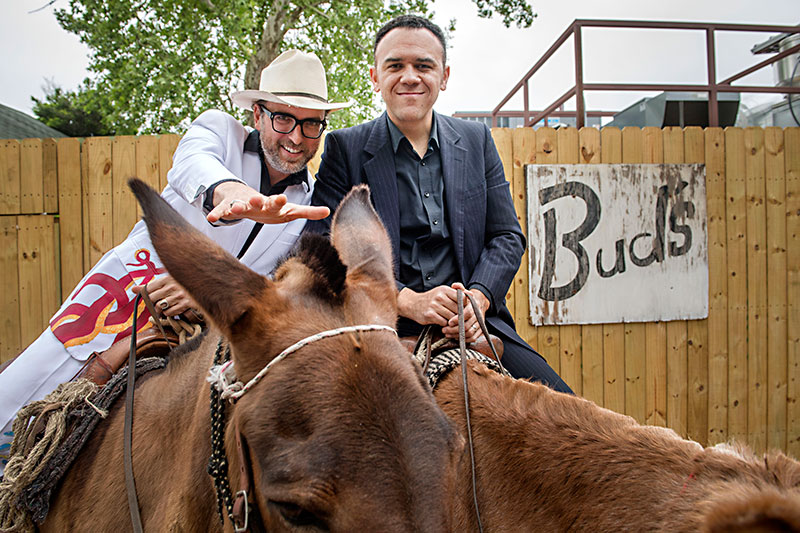 Saddled atop a mule, sporting an ivory suit emblazoned with a joint-smoking flamingo, Andrew Trube resembles an ambassador of carefree individualism as he cruises Cesar Chavez. Moseying behind him on an old long-ear named Clyde, "Playback" witnesses Trube and Mula turn heads. Excited passersby smile, wave, and snap photos.

For the singer and guitarist, who grew up with equine companions in East Texas, hoofing it at 5 mph allows decompression from months on the highway. When he's not on tour with his impeccably idiosyncratic R&B outfit the Greyhounds, Trube spends many days clomping down Austin's trails and sidewalks alongside Native American spiritualist Samuel Grey Horse, better known as the Sixth Street Cowboy. The saddle proved inspired transportation last month when the entertainer rode to every show on a horse or its 63-chromosomed counterpart.

"During South by Southwest, people are in their zone," explains Trube. "Then they see a mule and a horse, and they start petting them. All of sudden, there's nothing else. It was beautiful."

It's been 19 years since Trube linked with Anthony Farrell, a prodigious musician with a deep, emotive voice, who plays a bass synth with his left hand and an electric piano with his right. The Greyhounds' strikingly hip concoction of groove-mongering has since become an institution of enough national renown that they've been recruited to back Robert Finley, a 65-year-old soul singer that Black Keys frontman Dan Auerbach has recently produced and championed. Meanwhile, the duo's belief in Austin as a premier musical incubator has led them to double down locally.

Six months ago, they opened Bud's Recording Services, a studio occupying a section of the old Bud's Motorcycle Shop on Cesar Chavez. Its predecessor remains evident via copious tailpipes turned into chair legs and art, but Trube, Farrell, and engineer Sam Patlove handcrafted the space into an immaculate tracking, mixing, and mastering complex.

"We want to help artists realize their visions," says Farrell of Bud's, where he and Trube are in-house producers. "We remember what it was like to not know our way around the studio, not necessarily understand what it takes to make a record from start to finish, or how to communicate what you're really looking for. It's a place where there's no judgment and we can make things happen."

"We wore our suits every day like we were going to court," says Trube of the three-day analog session. "That's how people used to work in there. There was no computer. They had to work together and figure shit out."

No surprise for a pair known to dabble in the lost arts, the Hounds jibed with the studio's all-in-one-room, do-it-live essence. Shoulder-shakin' blues strut "No Other Woman" typifies the LP's undeniably natural feel, while the smooth R&B magic of "Learning How to Love" captures an exalted performance from Farrell.

"You feel the gravity in that studio," the keyboardist confirms. "Great people have come through there and left a lot for us to pick up."

Conceptual art commonly raises the question, "What does it mean?" Yet last Sunday at Laguna Gloria, few scratched their heads at the spectacle of orchestra musicians performing on an antique fishing boat. Instead, onlookers seemed to digest Icelander Ragnar Kjartansson's "sound sculpture" with relaxed appreciation since it proved more beautiful than challenging – at least for the audience. 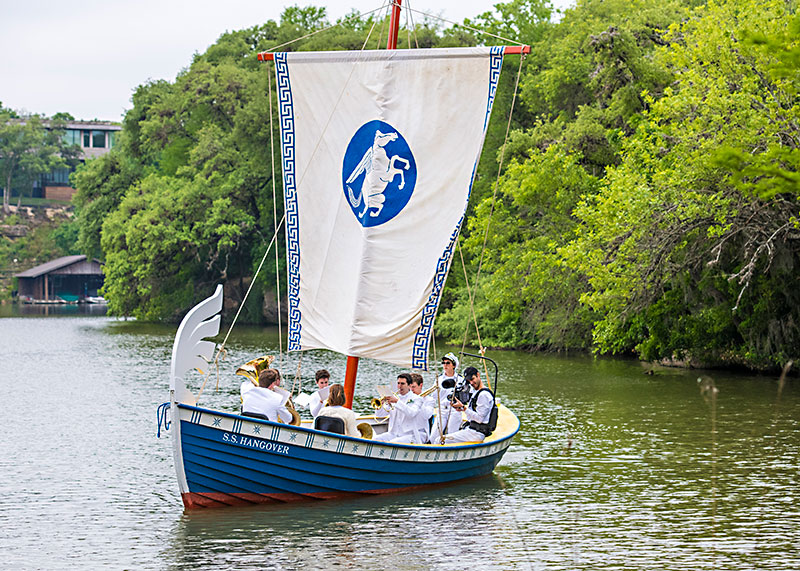 "I've played some weird gigs, but this might be the coolest weird gig I've done," Martin confirmed. "I've never done anything where I'm part of a sculpture."

On Monday, April 2, the Austin Music Commission unanimously passed a resolution asking City Council for $15 million in bond funding to purchase land and develop a music hub envisioned as an epicenter for entrepreneurship and professional development in the local music industry. The recommendation, motioned by Gavin Garcia, gave examples of existing hubs and co-ops nationally, but made no mention of one existing in our city: Mosaic Sound Collective, which is in a crucial state of development and deserves city support.

While two music hubs would be optimal, Austin's municipal body has inspired little faith that it would execute such a plan. The Music Commission would be smart to focus on supporting Mosaic, which is already building Austin music's cooperative future.

Brownout teased Its incoming LP of Public Enemy instrumentals with an incredible 15-minute mix in which Bronx hip-hop veteran DJ Eclipse mashes the Austin group's Latin psych-funk remakes with cutup P.E. vox and samples. The career-spanning Fear of a Brown Planet arrives May 25 on Fat Beats.

A Giant Dog has been selected to open all five Texas shows on Jack White's forthcoming tour, including May 2 at Austin's Circuit of the Americas. White's latest, the rudderless and overblown Boarding House Reach, briefly topped the Billboard 200 even though it's not half as good as A Giant Dog's 2017 LP Toy.

When Nils Lofgren had four guitars stolen before his Dallas show on March 30, his high school bandmate Howie Kweller, father to Austin rocker Ben Kweller, stepped in with a loaner. For the next night's concert at Austin's One World Theatre, venue director Hartt Stearns hooked the E Street Band guitarist up with real estate mogul Gary Keller, who let him borrow a Stratocaster from his personal collection.

White Denim braved the cold last Saturday to kick off a monthlong weekly residency on the backyard stage of Radio Milk, frontman James Petralli's new studio on Webberville Road. The singer/guitarist jokingly alerted the crowd that his pinky had gone numb mid-set, but the quartet with Austin all-star Conrad Choucroun on drums proved their usual force-of-nature working through new songs and old favorites.