Austin music journeys to the desert – and you're not invited 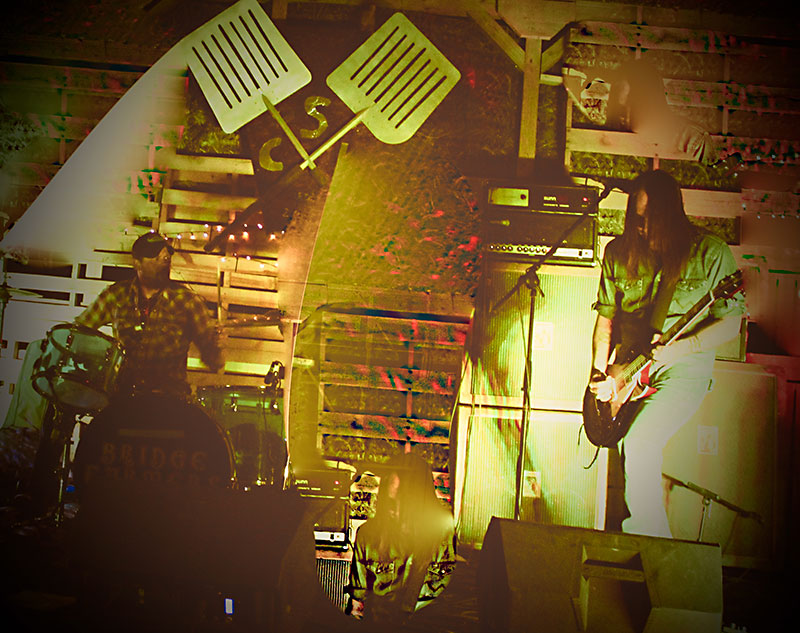 There's a secret tradition amongst a certain sect of Austin musicians and venue workers. In late March, after the manic week of South by Southwest, about 120 of us pile into our vans and drive eight hours to the most remote part of West Texas. There, we run wild playing music and buying and selling spatulas.

There's no electricity or running water inside Spatula City Limits. Cell phone service ceases 45 minutes before you turn onto a nameless dirt road leading you to a broken-down school bus and an improbably professional stage outfitted with a spectacular sound system. Naturally, the latter runs off a gasoline generator.

Stunning and unforgiving, acres of caliche soil dotted with creosote bush rise into the distant mountains. The dehydrated landscape recalls the brutal desolation of a Cormac McCarthy Western. Even so, in this middle of nowhere, Austin music colonizes.

"We've got everything you need,

So come buy one, two, or more.

See some bands you ain't seen before.

Hey girl, you sure are pretty.

Wanna go with me to Spatula City?" That ilk's hero is onetime Austinite Country Willie Edwards, a cult honky-tonker and farmer who's released copious records that can't be found on the internet. Appearing in bug-eyed ladies' sunglasses, cowboy hat, and cactus jacket, Edwards transformed into the coupling rod on a locomotive via his right arm, which strummed with unrelenting momentum on "Riverboat Gambler" and "Rollin' Down the Highway." His voice, meanwhile, rang as big and dusty as the nearby Chisos Mountains.

While he mostly sings in standard country vernacular – trains, bars, women – Edwards' mind occupies territory among Earth's exosphere, blaming "wind shear" for a detuned guitar string and slipping spaceship references into his lyrics. True story: In 2003, authorities confiscated a drum set he'd constructed out of pieces from the space shuttle Columbia, which exploded over his hometown of Nacogdoches.

Given the zipped lips surrounding SCL, it's difficult to trace the event's history. "Playback" can only confirm it happened last year based on an archaeological discovery. Upon arrival, we noticed a familiar pile of rocks, prompting Cunto! drummer Chris Hall to pull out a shovel and dig up a care package our past selves had left for our future personae 372 days prior. The metal tin, full of items we'd been nervous to drive home with, proved useful in the ensuing revelry.

In the tent city crescent around the stage, particularly between 2 and 6am, exists the greatest Austin music hang ever to occur outside Central Texas. Multitudes amble from camp to camp drinking, smoking, howling, laughing, singing, and telling stories. The music never stops. There's always a guitar, fiddle, mandolin, and something to bang on.

Cass Brostad, who swings a wrecking ball of emotionally naked poetry with her raging voice, remains the queen of Spatula City's late-night song circles. A moonlit rendition of her "Nature of the Beast" devastated all. Later, Mike "Dub" Wainwright of Clyde & Clem's Whiskey Business rang in Easter with a biblical original that questioned "How did they move the immovable rock? Who put it there?"

The most interesting character to encounter during the desert party's witching hours is Steve Gambler, a wiry and wide-eyed Renaissance man who serves as the event's stage manager, security, spiritual leader, tour guide, and mad scientist. A longtime behind-the-scenes linchpin in Austin's music scene, his elbow grease is Spatula City's infrastructure – and proof that anything is possible.

"I like a challenge," affirmed Gambler, clutching a somewhat terrifying Native American war club. "I'm at my best when I need to do something badass."

I had dismissed T.J. Hill as a hallucination when we crossed paths at 4am. He spoke in an twangy accent reminiscent of late wrestler Dusty Rhodes and told us about a recipe where he "cored a real nice bologna, stuffed it with bison jalapeño mac & cheese, and crisscrossed it with some bacon." In the ensuing daylight, I discovered he was real when he popped up onstage as the immensely talented bassist/vocalist for genuine Texas country act Armadillo Road. No house plays music between acts at Spatula City. Instead, Hard Luck Lounge co-owner Denis O'Donnell occasionally gets up and hawks spatulas with all the tact and charisma of a Buick dealer, promising incredible retail opportunities on left-handed models and new technology that can be used underwater. In reality, all the spatulas are of the same basic variety and they're taped to the side of the bus for $25 a pop.

A full moon risen over eastern peaks arrived as an ideal companion for the expansive, desert psych-folk drone of Lord Buffalo, who cast a palpable ambience over the scene. It proved a potent precursor for Spatula City's shoo-in headliners Bridge Farmers, whose heavy hypnotism transfuses the lysergic lunar missions of Hawkwind and occult rituals of Black Sabbath into a deafening catharsis.

Nothing has ever sounded as holy as said Austin trio vibrating the desert at 120 decibels, with every sound, color, and texture emitting from Tyler Hautala's full stack amp all at once. "Frater Achad," driven by the pulverizing rhythm section of Kyle Rice and Garett Carr, proved they could plow the earth. Their metallic sandstorm reached higher ground at 2am when Bridge Farmers began exploring the cosmos via epic improvisations in the wake of Hautala adapting Pink Floyd rarity "The Nile Song" into a desert detonated nuclear test.

Thankfully, a multiverse of spatulas was available to scrape us off the floor.

Market trends indicate that Americans are eating more food that requires being flipped over, which contributed to strong early spring numbers for the flattest of all kitchen utensils. Spatula sales at SCL grossed over $1,200 – half of which was donated to a nearby charity that helps families going through financial hardships. The other half was donated to the local EMS.